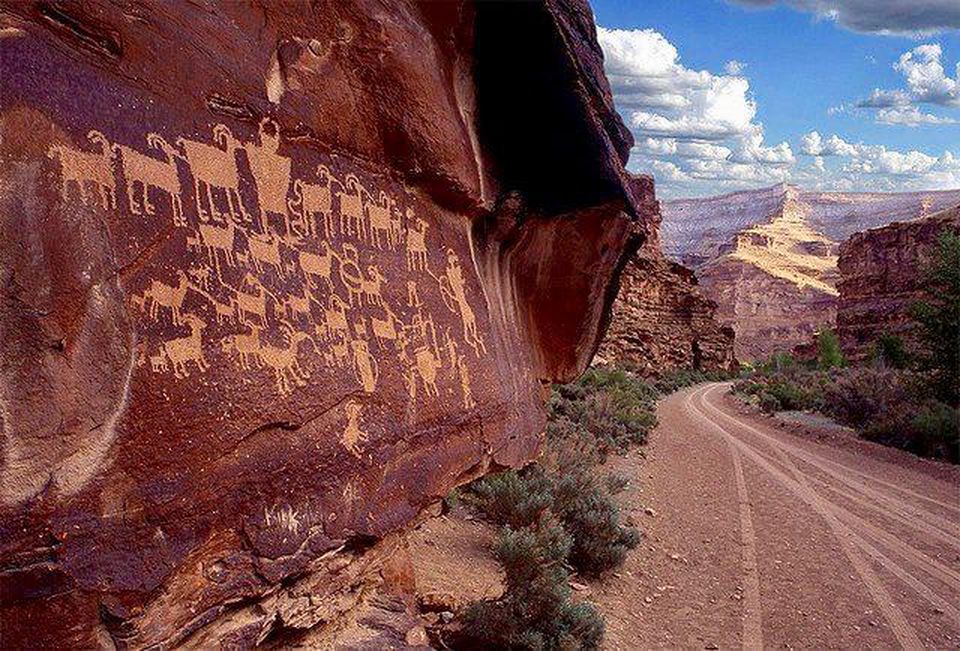 Situated in the desert of eastern Utah, The Nine Mile Canyon is the world’s longest art gallery. This canyon is home to tens of thousands of petroglyphs and pictographs over a 40-mile stretch. The canyon’s art was created by the culture of Fremont and the people of Ute and depicts everything from local wildlife to cultural displays and beliefs.

This site of over 10,000 pictures, as you can imagine, is a treasure trove of information for archaeologists and an opportunity for visitors to step back in time a thousand years ago. In the 1880s, this canyon was used to transport goods through the eastern Utah mountains.

A road was constructed through the canyon in 1886 to connect Fort Duchesne to the railroad line located in Price, Utah. However, today the canyon is primarily visited by tourists interested in learning more about the Ute and Fremont people.

The area is currently being appraised for the natural gas that lies within the Tavaputs Plateau. The development of this natural gas resource could impact local art, causing ongoing debates on how best to proceed.

The canyon formed from the small Nine Mile Creek, a tributary of the larger Green River which empties into Desolation Canyon. Although the creek is not a major body of water, it is one of the few year-round and reliable sources of water in an otherwise desert climate.

The Nine Mile Canyon consists of interbedded sandstone, mudstone and shallow water limestone. The changes in rock type record changes in the expansion and contraction of the ancient Lake Uinta.

The Green River Formation, which sits higher than the sandstone units used for petroglyphs is an Eocene sedimentary group. The formation is located in Colorado, Wyoming, and Utah in the location of Nine Mile Canyon.

The Green River Formation is the largest oil shale in the world with an estimated reserve of up to 3 trillion barrels of oil. This is larger than the entire oil resource in Saudi Arabia and holds a significant portion of the United States oil resources.

In order to unlock the oil one must heat the shale and essentially “cook” out the hydrocarbons, an incredibly expensive process.

In total, there are 10,000 individual images within Nine Mile Canyon located at over 1,000 archaeological sites. Many of the depictions were produced by the Fremont from 950 to 1250 AD.

The Fremont, advanced for their time, practised established agriculture, growing crops of corn and squash in the canyon floor. The Fremont build irrigation ditches along the canyon edges as a way to divert water to crop areas.

As we step forward to the 16th century the Utes dominated the region and added to the rock art that was previously created by the Fremont. Several hundred years later in the late 19th century, there is the first mention of the Nine Mile Canyon in journals of American fur traders.

The petroglyphs and pictographs are carved and painted on an easily weathered sandstone, making the depictions vulnerable to destruction. The walls of the canyon are adorned with hunting scenes and a wide array of animals including birds, sheep, bison and lizards.

In 2004 the Nine Mile Canyon included on the National Trust for Historic Preservation list of America’s Most Endangered Places. This was largely due to increased natural gas development in the area and tourist activity.