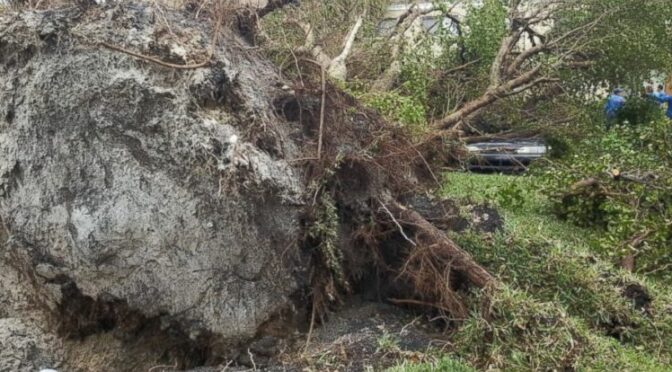 A post overlooking the Apalachicola River, 200 years ago, housed what historians say was North America’s largest community of freed slaves at the time.

Hurricane Michael has given archaeologists an unprecedented opportunity to study its story, a significant tale of black resistance that ended in bloodshed. The site, also known as Fort Gadsden, is about 70 miles southwest of Tallahassee in the Apalachicola National Forest near the hamlet of Sumatra.

British lived at Prospect Bluff with allied escaped slaves, called Maroons, who joined the British military in exchange for freedom, along with Seminole, Creek, Miccosukee, and Choctaw tribe members.

The Negro Fort, which was built on the site by the British during the War of 1812, became a haven for escaped slaves. Inside, 300 barrels of gunpowder were stored, and defended by both women and men. Wary of the group of armed former slaves in Spanish Florida living so close to the United States border, U.S. soldiers began to attack.

On July 27, 1816, U.S. forces led by Colonel Duncan Clinch ventured down the river and fired a single shot at the fort’s magazine. It exploded, killing 270 escaped slaves and tribespeople who were inside. Those who survived were forced back into slavery.

Managed by the U.S. Forest Service, which purchased it in the 1940s, the site has been preserved as a National Historic Landmark and park. Because of that, it was never excavated for artefacts, except in 1963 by Florida State University, mainly to identify structural remains.“It’s a really intriguing story. There’s so much new ground there that historians of the past never really got into,” said Dale Cox, a Jackson County-based historian.

In an ironic way, Hurricane Michael has changed that — an isolated upside of the devastating storm. The October Category 5 hurricane caused extensive damage to the site, toppling about 100 trees.

Most of the debris has been cleared, but under the remaining massive roots, archaeologists began this month to dig and sift through the soil, uncovering small artefacts and documenting archaeological features revealed by the upturned trees.

The effort is funded by a $15,000 grant awarded from the National Park Service and is in partnership with the Southeast Archaeological Center.”The easy, low-hanging fruit is European trade ware that dates to that time period.

But when you have ceramics that were made by the locals, it’s even more unique and special,” said U.S. Forest Service Archaeologist Rhonda Kimbrough. “For one thing, there’s not much of it, and we don’t have a whole lot of historical records other than the European view from what life in these Maroon communities was like.”

So far, Kimbrough and others have found bits of Seminole ceramics, shards of British black glass and gunflint and pipe smoking fragments. They’ve also located the area of a field oven, a large circular ditch that surrounds a fire pit.

The fort was recently inducted into the National Park Service’s Underground Railroad Network to Freedom.” It’s like connecting the sites, pearls on a string,” said Kimbrough, “because these sites, even though they’re spread all over the place, they’re connected by one thing, which is resistance to slavery.”

Historian Cox has been tracking down the former slaves who died at the fort and the descendants of the few who made it out alive, like Polydore, who escaped and was recaptured to work for Andrew Jackson. Cox found his descendants who now live in Louisiana.

It’s been a slow process of sifting through Census records, which are private for 72 years before release, international archives of Great Britain as well as Spanish archives in Cuba. But Cox is on a quest to name as many as possible.

The people who lived in the Maroon community were very skilled, he said. Many were masons, woodworkers, farmers. They tended the surrounding melon and squash fields, but little is known precisely about their day-to-day lives.

The area has always been ideal for settling, given its higher elevation and clearings amid the river’s mostly swampy perimeter, said Andrea Repp, a U.S. Forest Service archaeologist. Prior to European occupation, the site was sacred to natives and was named Achackweithle, which resembles the words for “standing view” in Creek, according to the Florida Geological Survey. Matthew Shack, a Panama City historian, praised the archaeological effort.

Shack, 76, is a descendant of Maroons. His great-great-grandfather escaped a North Carolina plantation, married a part-Native American woman and settled in Marianna. He remembers his grandmother’s stories about the Prospect Bluff community.

“I remember her telling us about the ‘Colored Fort’ and all the coloured folk who died,” he said. “A lot of black history wasn’t taught. A lot of our history is lost, and some of it we won’t get back. I’m glad that there’s a renewed interest in capturing the history that I thought was lost.”