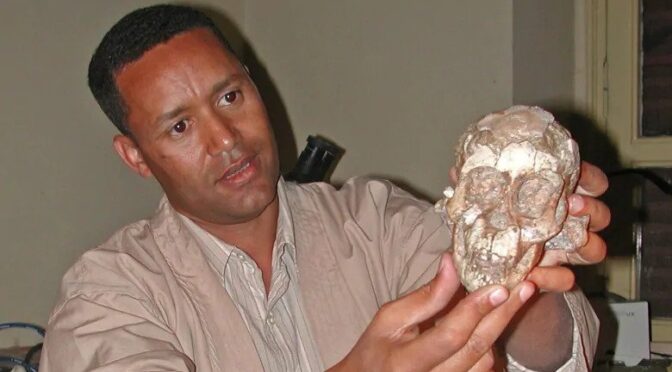 This 3.3-Million-Year-Old Hominin Toddler Was Kind of Like Us

In a fragment of sandstone sticking from the soil in the sparkling flatlands of Northeast Ethiopia, a fossil fragment of the cheekbone has been detected. Zeresenay Alemseged almost instinctively realised that he had come across something important.

The skin bone brought a jaw, parts of a skull and eventually collar bones, shoulder blades, ribs and — perhaps most important — the most complete spinal column of any early human relative ever found.

Nearly 17 years later, the 3.3-million-year-old fossilized skeleton known as the “Dikika Baby” remains one of the most important discoveries in archaeological history, one that is filling in the timeline of human evolution.

“When you put all the bones together, you have over 60 per cent of a skeleton of a child dating back to 3.3 million years ago, which is more complete than the famous australopithecine fossil known as ‘Lucy,’ ” Alemseged, a 47-year-old professor of organismal biology and anatomy at the University of Chicago, told The Washington Post.

“We never had the chance to recover the face of Lucy, but the Dikika child is an almost complete skeleton, which gives you an impression of how children looked 3.3 million years ago.”

The fossil, also called  “Selam” — “peace” in the Ethiopian Amharic language — has revealed numerous insights into our early human relatives. But Alemseged said one of the most startling findings comes from the toddler’s spine, which had an adaptation for walking upright that had not been seen in such an old skeleton.

The result, he said, is a creature whose upper body was apelike, but whose pelvis, legs and feet had familiar, humanlike adaptations.

“If you had a time machine and saw a group of these early human relatives, what you would have said right away is, ‘What is that chimpanzee doing walking on two legs?’ ” Alemseged said.

The findings, published in the Proceedings of the National Academy of Sciences, show for the first time the spinal column was humanlike in its numbering and segmentation. Though scientists know that even older species were bipedal, researchers said Selam’s fossilized vertebrae is the only hard evidence of bipedal adaptations in an ancient hominid spine.

“Yes, there were other bipedal species before, but what is making this unique is the preservation of the spine, which simply is unprecedented,” Alemseged said. “Not only is it exquisitely preserved, but it also tells us that the human-type of segmentation emerged at least 3.3 million years ago. Could there have been other species with a similar structure, yes, but we don’t know for sure?”

Human beings share many of the same spinal structures as other primates, but the human spine — which has more vertebrae in the lower back, for example — is adapted for efficient upright motion, such as walking and running on two feet.

Among the larger questions researchers like Alemseged are trying to answer include: When did our ancestors evolve the ability to be bipedal? When did we become more bipedal than arboreal, or tree-dwelling? And when did our ancestors abandon an arboreal lifestyle to become the runners and walkers that eventually populated Africa and then the world?

One of the significant barriers to answering those questions is that complete sets of vertebrae are rarely preserved in the fossil record.

“For many years we have known of fragmentary remains of early fossil species that suggest that the shift from rib-bearing, or thoracic, vertebrae to the lumbar, or lower back, vertebrae were positioned higher in the spinal column than in living humans, but we have not been able to determine how many vertebrae our early ancestors had,” said Carol Ward, a curator’s distinguished professor of pathology and anatomical sciences in the University of Missouri School of Medicine, and lead author on the study.

“Selam has provided us the first glimpse into how our early ancestors’ spines were organized.” Unpacking the intricacies of Selam’s spinal structure would not have been possible without the assistance of cutting-edge technology, researchers said.

After 13 years of using dental tools to painstakingly remove portions of the fossil from sandstone — which risked destroying the fossil — Alemseged packed up Selam in his suitcase and took the fossil from Ethiopia to the European Synchrotron Radiation Facility in Grenoble, France, in 2010. Alemseged and the research team spent nearly two weeks there using high-resolution imaging technology to visualize the bones.

The fossil had undergone a medical CT scan in 2002 in Nairobi, Alemseged said, but that scanner was unable to distinguish objects with the same density, meaning that penetrating bones encased in sandstone was impossible. Once in France, that was no longer a problem, and the results, he said, “were mind-blowing.”

The scans revealed that the child possessed the thoracic-to-lumbar joint transition found in other fossil human relatives, but they also showed that Selam had a smaller number of vertebrae and ribs than most apes have.

For researchers, the skeleton is a window into the transition between rib-bearing vertebrae and lower back vertebrae, which allowed our early human ancestors to extend at the waist and begin moving upright, eventually becoming highly efficient walkers and runners. Though he has been studying Selam for nearly two decades, Alemseged thinks the fossil has more secrets to share with the modern world.

“I don’t think she will stop surprising us as the analysis continues,” he said. “Science and tech are evolving so much that I’m sure in a few years we’ll be able to extract even more information that we’re not able to extract today.”