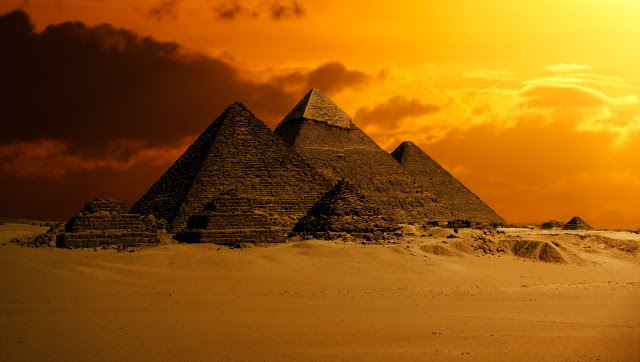 Divers Exploring A 2,300-Year-Old Pyramid Have Found The Underwater Tomb Of A Powerful Pharaoh

Have you ever heard of having to use scuba gear to explore an ancient pyramid? we didn’t either until we came across the story of an archaeologist Pearce Paul Creasman. His story involves the study of an ancient race just as advanced as the Egyptians, who shared the same continent with history and culture just as rich and shrouded in mystery.

Get ready as the richest go underwater to explore the tomb of a pharaoh that once ruled the “kingdom of kush“. Before we dive right into our pyramid diving story, let’s back it up a bit and learn a little bit about pyramids first. Enormous architectural wonders were built all over the world, centuries before modern technology.

Pyramids were used by ancient peoples as both places of worship and as monuments and tombs of the dead. It’s estimated that there are somewhere in the neighbourhood of 2,000 pyramids still standing in the world today, they can be found on every continent on earth except for icy Antarctica. The most famous of course is the Great Pyramids of Giza in Cairo, Egypt. The largest stands at 455 feet. The ancient Egyptians built these amazing structures as tombs and monuments for their pharaohs.

Over in the Americas, many ancient tribes built step pyramids as temples for worshipping their gods. The famous El Castillo pyramid of Chichen Itza for example was built by the Mayans over eleven hundred years ago in the Yucatan Peninsula of Mexico. It was built as a temple to the serpent God Kukulkan.

In ancient Greece the Pyramid of hellinikon was built some 100 years earlier than the Great Pyramids of Egypt, its purpose remains unknown. In China there stands the great white pyramid of XI’AN, we know very little about it as the Chinese government has banned access to the structure but rumor has it that it could be twice the height of the Great Pyramid at Giza.

On the Australian continent there are two possible yet unconfirmed pyramid sites, the Gympie pyramid and Walsh’s pyramid, and as previously mentioned exactly zero on Antarctica, despite a recent debunked story about one the images turned out to be snow-covered pyramidal-shaped mountaintops.

The country that holds the title for the most pyramids still intact is surprisingly not Egypt but its neighbor to the south on the African continent Sudan. Sudan is home to some two hundred and forty pyramids built by the ancient Cushite people. Sudan and the cushites also happen to be at the center of our archaeological story.

The kingdom of kush also referred to as Nubia was located in northeast Africa just south of ancient Egypt in modern-day Sudan and it had close ties to ancient Egypt. Its main cities were situated along the Nile River and two of its main tributaries the White Nile and the Blue Nile. If not for the formation of these waterways and their proximity to gold and iron ore deposits it’s likely humans would not have settled in this dry desert region.

The kingdom of kush lasted for over 1,400 years. First established circa 1070 BCE when it gained its independence from Egypt. In 727 BCE kush took control of ancient Egypt, ruling it until the Assyrians arrived in the next century.

Once the Roman Empire conquered Egypt, the kingdom of kush began to weaken and eventually collapsed sometime in the 4th century CE. The Cushite was very similar to the ancient Egyptians in many ways, sharing a religion, a form of government, and many aspects of culture.

They worshiped Egyptian gods and mummified their dead and entombed them in pyramids. Aside from the Pharaoh and other rulers the highest class in kush were the religious leaders the priests. Much like their Egyptian neighbor’s religion and a strong belief in the afterlife played an important role in the life of the Cushite people.

The pyramids that the Cushite people built to entomb their pharaohs and other important figures looked very similar to the ancient Egyptian structures. They did have a few key differences though for one they differed in size with the average cushite pyramid standing roughly 6 to 30 meters or 20 to 98 feet high while the average Egyptian pyramid was much taller at roughly 138 meters or 453 feet. There was also one other major difference while the Egyptians burial chambers were located inside the pyramidal structure itself the kush burial chambers were located underneath the pyramids buried below the structure.

One such leader buried in this matter was the Pharaoh Nastasen. He ruled the kingdom of kush from 335 to 310 BCE. The little that we do know about this Nubian King is from writings on stone tablets and a more few artifacts. The writings tell us that the highlight of his reign came when the Pharaoh Nastasen defeated an invasion from Upper Egypt and gained many spoils in his victory.

Once Nastasen crossed into the afterlife he became the last cushites, King, to be buried in the royal cemetery and necropolis at nepata. A glorious graveyard spanning more than seven and a half million square feet.

The site of the royal cemetery in the ancient city of nepata is now Karima, Sudan, located about one mile west of the Nile river bank. Seen from the sky one of its most commanding features is an arc of some twenty pyramids built between 650 BCE and 300 BCE. National Geographics Kristin Romy describes this arc of pyramids as a quote “strung together like gems on a delicate necklace”.

There are more than twenty pyramids at the site overall though. At least 60 Nubian kings and queens are buried there among hundreds of other individuals. The most famous resident is Pharaoh taharqa who ruled all of Egypt during the seventh century BCE. The Pharaoh Nastasen’s twenty-three hundred-year-old pyramid tomb the last of its kind stands at roughly thirty feet or 9.1 meters and was erected at one of the lowest points of elevation at the royal necropolis.

This is one of the reasons why Nastasen’s burial chambers are completely underwater. Why exactly? the pyramid’s proximity to the Nile River combined with both natural and man-made climate change has caused the groundwater levels to rise over the centuries. Submerging the tombs that are cut into the bedrock underneath the pyramids. Due to its low elevation nastasen’s tomb is among the most submerged.

Enter archaeologists Pearce Paul Creaseman. Creaseman holds the dual-title of both Egyptologist and underwater archaeologist yes indeed that is a thing, when Creasman first visited the royal cemetery back in 2018 he saw his unique skill set as an opportunity to explore the watery tombs and discover more than what was ever uncovered when the site was first explored nearly a century ago. Back then the water was only knee-deep now the water reached the ceiling of the tomb chambers.

After Creaseman and his team spent the better part of a year digging the staircases leading to nestasen’s tomb out from under sand they put on their scuba gear and headed into the murky waters. Creaseman had to make his way through a series of three chambers. While navigating in water thick with muddy sediment and making vision close to impossible.

When they reached the third and final chamber they discovered a treasure trove of artefacts including gold foil, shabti dolls, funerary figures whom the ancient Nubians believed would accompany the deceased into the afterlife. Also in the chamber the sarcophagus of the pharaoh Nastasen himself. The only problem is that ceiling-high muddy water makes excavation and study of these artefacts highly problematic. Creaseman is optimistic though and now packed with experiences and knowing what to expect.

Their aim is to return to the site later in 2020 an attempt to excavate the burial chamber in what they themselves argue is an audacious and logistical challenge. Only then will we know the extent and value of the treasures inside this pyramid and perhaps eventually the dozens of others. Says Christman ” I think we finally have the technology to be able to tell the story of Nuri, to fill in the blanks of what happened here. it’s a remarkable point in history that’s so few know about it. it’s a story that deserves to be told.” So how about you would you take the plunge into those muddy waters to uncover ancient treasures?