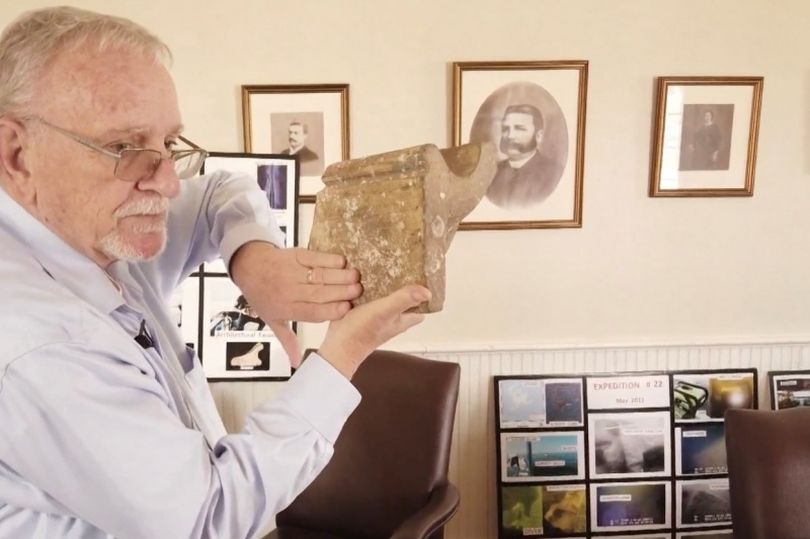 Archaeologist claims to have discovered a ‘12,000-year-old underwater city with pyramid and energy field off the US coast.’

A Retired architect has bizarrely claimed to have found an ancient underwater city with a pyramid and energy field off the coast of Louisiana. George Gelé, who calls himself an amateur archaeologist, has taken 44 trips to the site of what he believes are the ruins of a 12,000-year-old city – a theory that is not backed up by experts.

His dubious claims are tied to mysterious granite mounds off the coast of the Chandeleur Islands in the Gulf of Mexico, 50 miles east of New Orleans. It’s where Gelé says there’s a pyramid in the centre of a granite city.

“What’s down there are hundreds of buildings that are covered with sand and silt and that are geographically related to the Great Pyramid at Giza,” Gelé told local CBS affiliate WWL-TV.

“Somebody floated a billion stones down the Mississippi River and assembled them outside what would later become New Orleans.”

Gelé refers to the site as “Crecsentis” and the granite masses under Chandeleur Sound have been a topic of study for years since granite is not found naturally in Louisiana or Mississippi.

Gelé has been studying the “remnants of major buildings” and “large pyramid” for almost 50 years, including on four excursions with local shrimper Ricky Robin. Robin told WWL-TV that the compass on his boat spun completely around when he neared the area where Gelé claims the tip of the pyramid lies.

“Everything will go out on your boat, all your electronics,” Robin said.

“Like as if you were in the Bermuda Triangle. That’s exactly what we got here.”

Robin said the area has been a point of local discussion as fishermen reported catching strange square rocks in their nets over the years.

“I thought right away it was pieces of the pyramid because it was right around where that compass spun,” Robin said.

“The existence of this site has long intrigued Isleño fishermen and mariners familiar with the area,” The St. Bernard Voice wrote ahead of a lecture by Gelé in January.

“Who could have constructed a solid granite structure roughly the size of the Caesar’s Superdome in these waters, now covered with silt?

“Mr. Gelé has interesting theories about the origin, age, and purpose of this pyramidal structure.”

While the thought of a lost city is enticing, some scientists shared other ideas about what the mounds are.

Gelé explored hypotheses about the granite masses in a 2014 presentation, including the possibility that they originated from a construction dump or multiple shipwrecks. A Texas A&M study from the late 1980s also suggested the underwater granite was from shipwrecks, or piles of ballast stones thrown from old vessels, WWL-TV reported.

The idea is that the stones were dumped from Spanish or French ships to lighten the boats as they entered shallow waters on the way to New Orleans. Local newspaper The Advocate talked with LSU archaeology professor Rob Mann in 2011 about the site. He theorized the stones were part of an attempt to create an artificial reef in the 1940s by dumping building materials in the water.

“I think simply searching underwater at this point won’t give us any more answers,” Mann told the newspaper.

“When the historical archive work is done, looking at records and newspapers, that’s when we will know what it is.”

The newspaper also talked with the state’s archaeologist at the time, who agreed that it appeared barge loads of stone were dumped there.

“Those are questions that need to be answered.”

Some social media users shared their scepticism of Gelé’s claims, with one person writing, “Entrance to the lake. A perfect place to offload ballast.”

Another commenter said: “Actual archaeologist here. I fixed your headline: Retired architect thinks natural features are the ancient city.” But others were still curious about the alleged energy field out there, and what could have produced it.

“All I know is somebody built a city 12,000 years ago and it’s stuck out in Chandeleur,” Gelé claimed.

“Whether or not they had someone on their shoulder who flew in with a UFO, I don’t know.

“All I know is they left a whole lot of granite rocks out there.”

Gelé added that he hopes modern sonar technology and satellite imaging can help unlock some of the secrets of the mounds.