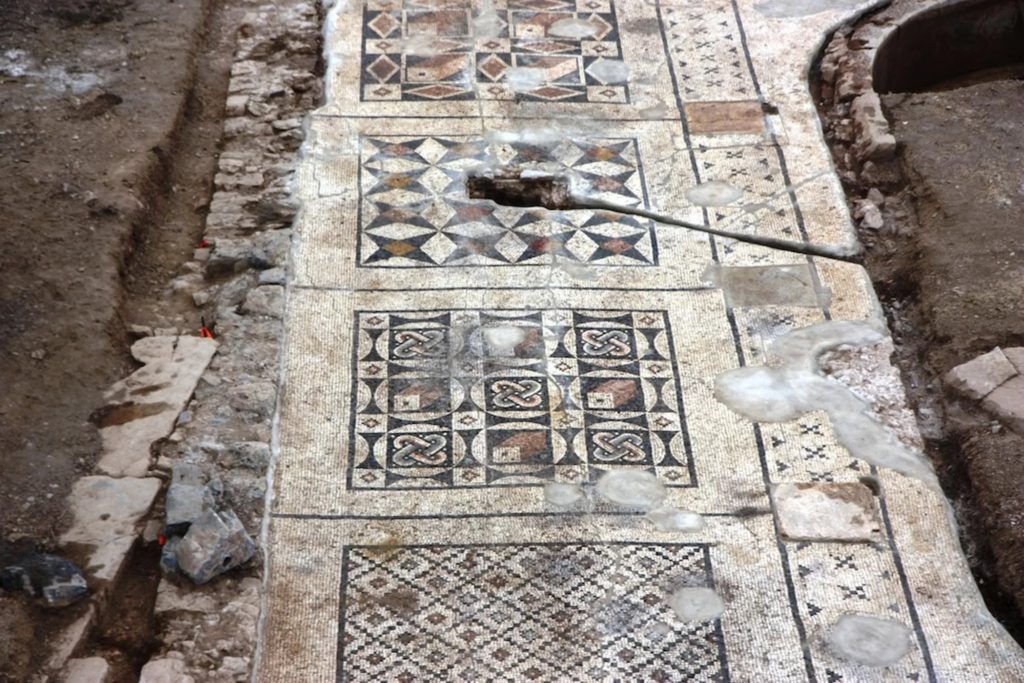 A giant poolside mosaic featuring intricate geometric patterns has been Excavated in southern Turkey, revealing the far-reaching influence of the Roman Empire at its peak. The mosaic, which once decorated the floor of a bath complex, abuts a 25 foot (7-meter)-long pool, which would have been open to the air, said Michael Hoff, a University of Nebraska, Lincoln art historians and director of the mosaic excavation.

The find likely dates to the third or 4th century, Hoff said. The mosaic itself is an astonishing 1600 square feet (149 square meters) — the size of a modest family home.

“To be honest, I have completely bowled over that the mosaic is that big,”

The first hint that something stunning lay underground in southern Turkey came in 2002. When Purdue University classics professor Nick Rauh walked through a freshly ploughed farmers field near the ancient city of Antiochia ad Cragun.

The plough had churned up bits of mosaic tile, Hoff said. Rauh consulted other archaeologist’s, including experts at the local museum in Alanya, Turkey. The museum did not have fund’s to excavate more than a sliver of the mosaic, so archaeologist’s left the site alone.

Last year, with a new archaeological permit for the site in hand, museum archaeologist’s invited Hoff and his team to complete the dig. So far, the researchers have revealed about 40% of the mosaic. The floor is in “pristine” condition, Hoff said in a university video about the dig.

It would have fronted an open-air marble swimming pool flanked by porticos.

The mosaic itself is composed of large squares, each sporting unique geometric designs on a white background, from starburst patterns to intertwined loops. It is the largest Roman mosaic ever found in southern Turkey, which was thought to be rather peripheral to the Roman Empire, according to Hoff.

The existence of the mosaic suggests that Antiochia ad Cragum was far more influenced by the Romans than believed, Hoff said.

The city of Antiochia ad Cragum, founded in the 1st century, has a number of Roman features, including bathhouses and markets. Hoff’s team has also been excavating a 3rd-century Roman temple in the city and a street lined with colonnades and shops.   The team will return with students and volunteers to complete the mosaic excavations.

Ultimately, Hoff said, the plan is to construct a wooden shelter over the entire mosaic and open the site to public visits.