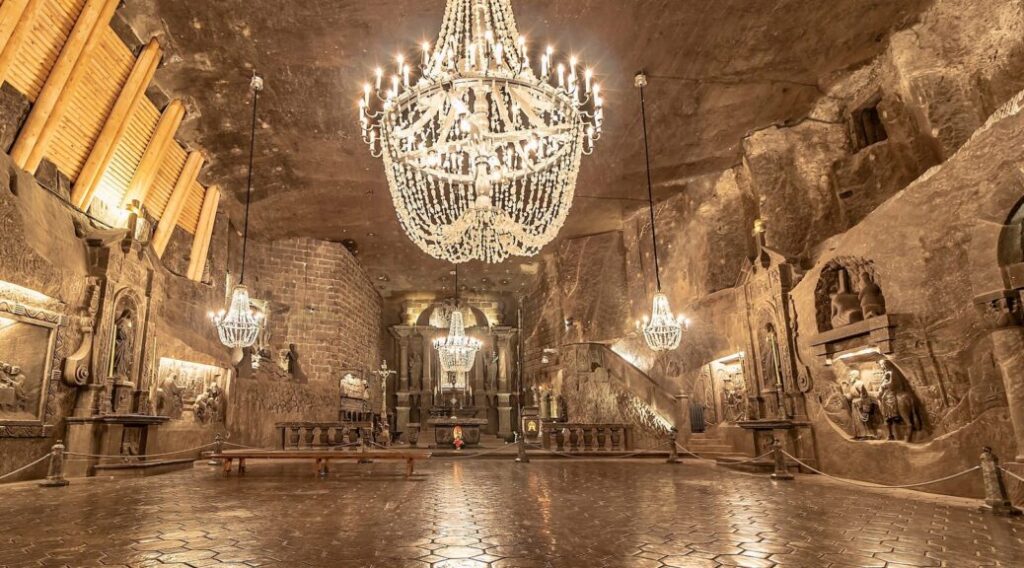 Inside an ancient Polish salt mine that has underground lakes, fully carved chapels, and chandeliers made of salt

This Polish mine has fascinated millions of visitors, from the underground pools to an impressive carved chapel and is made entirely of salt

The Salt Mines of Wieliczka is located in the vicinity of Krakow and are on UNESCO World Heritage List since its construction in the 13th century, it has been explored by 45 million tourists.

Sitting on everyone’s kitchen counter is the kitchen staple so basic it’s borderline boring. And as I write, I’m already thinking of salt more than I have in this past year combined.

But the Wieliczka salt mine, near Krakow, Poland proves that salt can be a masterpiece on its own. The mine was first opened in the 13th century, and today, it’s a part of the First UNESCO World Heritage List.

For a reason! The salt mine, which reaches -1072 ft at its deepest point, features underground lakes, 2,000 chambers, and chapels equipped with enormous chandeliers. And if that wasn’t enough, every little thing is made of salt. The mine is so unreal, it brings to mind a level in Tomb Raider, rather than a place thanks to which I season my dinner.

The history of Wieliczka salt mine dates back to the Middle Ages when it used to be called the Magnum Sal, or the Great Salt. In the 13th century, it was the largest source of salt in the country, which was crucial to the country’s economy. Today, it’s one of the main tourist attractions in Poland.

Daily email contacted Aleksandra Sieradzka from the marketing and communications department at the Wieliczka Salt Mine to find out more about this breathtaking place.

Aleksandra told us that all the 2000 chambers in the mine are carved of salt. “The corridors and even the floor are made of salt.”

There two chapels of St. Kinga and St. Anthony that are both made entirely of salt, including the altars and the statues of saints that were carved by the sculptor miners. “The chandeliers also contain crystal salt—the purest type of salt.”

Salt may seem like a fragile and delicate material, but it has a hardness similar to that of gypsum. “The processing of salt itself is not difficult; however, in order to professionally carve in salt, one needs to have a lot of experience with this material,” explained Aleksandra.

“Every block of salt is different—it differs not only in size or hardness but also in color, which can be used in an interesting way in the act of creation.”

Aleksandra confirmed that, if you’re lucky, you can pop into a party or two at the Mine. “That is true, there are a couple of chambers where you can have a party. One big ballroom (Warszawa Chamber) and a few smaller ones. The Mine is famous for its New Year’s concerts that take place during the first weekend of January.”

We can only imagine how enormous the whole underground structure is because only 2% of it is accessible to tourists. Meanwhile, the salt mine corridors form an actual labyrinth that stretches up to a whopping 498 ft in length. There are 9 levels in total and the lowest one is located at 1072 ft below ground.

But Wieliczka is only the fifth-biggest salt mine out there. Ontario is home to the biggest one in the world, which is located 1800 ft under Lake Huron.

Compass Minerals’ Goderich salt mine is as deep as the CN Tower in Toronto is tall. The second-biggest is Khewra Salt Mines in Pakistan, and the third-place belongs to Prahova Salt Mine in Romania.