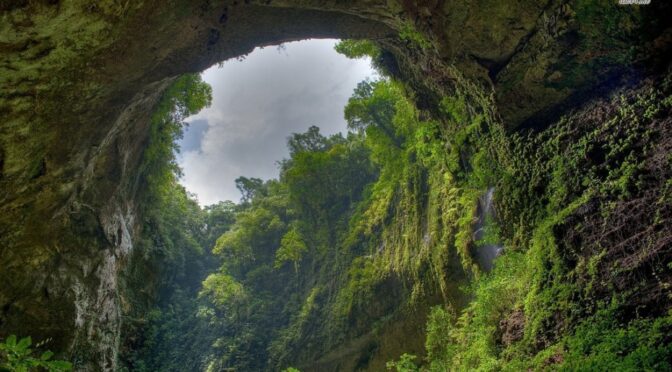 The Largest Cave ever found on earth. so big, it has its own ecosystem

The Son Doong Cave in Vietnam is the largest cave passage in the world. This huge and intricate cave system was created by water that percolated down from a rainforest above, ultimately carving into the rock.

Deep inside the cave sits a flourishing jungle, which grows 200 meters below ground level in an area where the cave roof has collapsed.

Home to an impressive ecosystem with a dangerous system of pathways, this rainforest is quite the destination. To date, only explorers and very few tourists have laid eyes on it. Would you dare to be one of them?

For a cave that’s located inside of a UNESCO listed park, Vietnam’s Phong Nha-Ke Bang, it’s quite shocking that it was first discovered only 3 decades ago – on accident by a local farmer.

In 1990, while seeking shelter from a storm in the jungle, Ho Khanh stumbled upon this 3-million-year-old natural wonder and reported it to the British Caving Research Association.

Unfortunately, however, Khanh lost track of the cave’s exact location and it took almost 2 more decades for Son Doong cave to be rediscovered.

Unbelievably, in 2008, Ho Khanh stumbled upon the elusive cave once again! Luckily he remembered the location this time around and experts finally began exploring, eventually determining Son Doong to be the largest cave in the world.

Not only does it have its own localized weather system, but this massive cave is home to the largest stalagmite ever found, nicknamed “Hand of Dog,” and a cave floor littered with rare limestone pearls.

But all of that isn’t even close to everything Son Doong has to offer — this fascinating cave system has its very own rainforest, the Garden of Edam.

Son Doong’s rainforest is home to flying foxes and endangered tigers, as well as rare langurs and trees as tall as buildings.

On bright days sunbeams stream through the dolines, illuminating carpets of moss below on a section of the cave nicknamed “Watch Out for Dinosaurs.”

Since 2012, one tour company called Oxalis has been taking a strict number of tourists per year into Son Doong — a treacherous five-day trek that only a lucky few will ever experience.