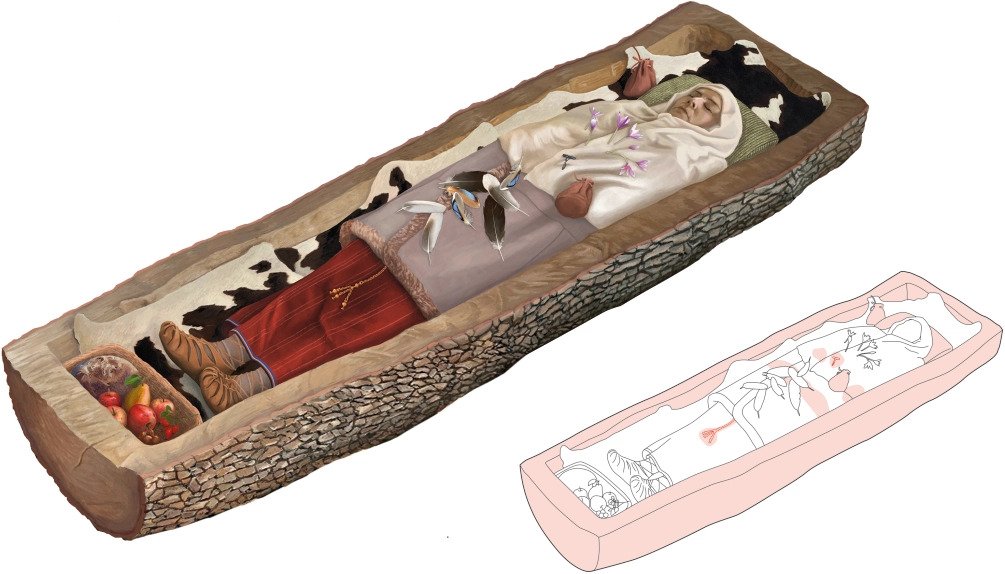 After studying the 2,200-year-old burial, archaeologists learned that the woman was about 40 years old when she died and had probably performed little physical labour during her lifetime. Moreover, an analysis of her teeth suggested this woman liked to eat starchy or sweetened foods.

Even her coffin was remarkable; the woman was buried in a hollowed-out tree trunk, which still had bark on its exterior.

The woman’s remains were originally found in March 2017, during a construction project at the Kern school complex in Aussersihl, a district in Zurich.

Since then, an interdisciplinary examination by the city of Zurich’s archaeology department has illustrated much about this woman’s life in 200 B.C.

For instance, an isotope analysis of the woman’s bones showed that she was a local who grew up in Zurich, likely in Limmat Valley. (An isotope is an element with a different number of neutrons than usual.)

The archaeologists were especially intrigued by the clasp on the woman’s necklace.

Both ends of the necklace had a garment clip known as a brooch that allowed her to wear the string of blue and yellow glass and amber beads, they said in a statement (translated from German with Google Translate).

The woman also wore bronze bracelets and a delicate bronze belt chain with pendants hanging from it. Several iron clasps held her clothes together.

The woman’s remains were found buried about 260 feet (80 meters) from the grave of a Celtic man found in 1903 when the school’s gym was being built, the Office for Urban Development reported. That man had been buried with a sword, shield and lance.

Because these two individuals were buried in the same decade, it’s possible they knew each other, the archaeologists said.

Though people often think of the Celts as hailing from the United Kingdom, they actually lived in continental Europe, as far east as modern-day Turkey, Live Science previously reported.