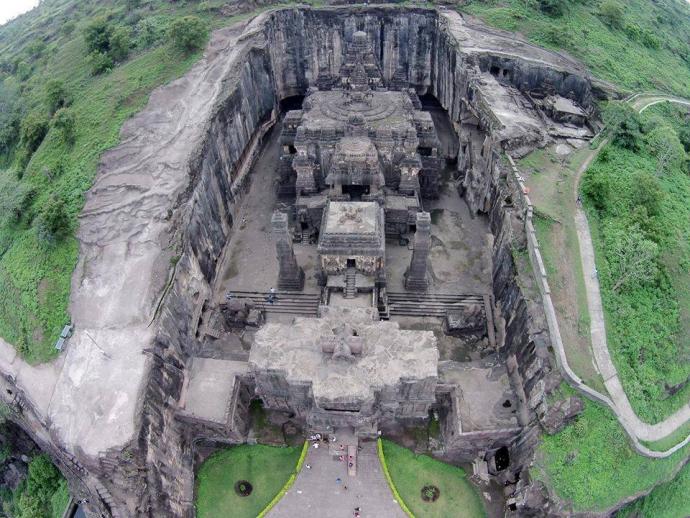 Kailasa Temple, The Massive Temple Was Chiseled By Hand For More Than 20 Years

Archeologists have recently uncovered a temple in what could be the world’s next wonder, carved out of mountain rock by ancients. The temple is known as the Kailasa Temple in Elora, Maharashtra, India.

Some people call it the Kailash. The temple of Kailasa is dedicated to the Hindu faith and was ordered to be built in ancient India by King Krishna I of the Rashtrakuta dynasty.

The temple originated around the 8th century A.D, and it is intriguing that the technology of the period could have contributed to such a momentous construction task.

One may wonder at the scope of the construction and estimate the temple to be completed after many decades or centuries. However, the temple only took less than 18 years to finish, according to scientific estimates.

It was estimated that 60 tonnes of rock were being removed every day during the temple’s construction phase. The temple workers labored for 12 hours a day hauling at least 5 tonnes of rock out from the mountain per hour.

Scientists still have not fully figured out the construction methods used in conjunction with the tools available during the period and were left baffled at the scope of the operation.

The Kailasa temple is part of a complex of 34 monasteries and temples which span over an area of 2 kilometers. As they were all cut out of the mountainside, they are collectively known as the Elora caves, carved out from a basalt cliff.

The temple has a height of 98 feet, was 109 feet wide, and had a depth of 164 feet. This makes it possibly one of the biggest known structures of its kind on the planet. The entrance of the temple faces the west. What is remarkable about the entrance is the degree of accuracy of its facing, giving it a 270-275 degree on a compass.

A 2 storey gateway adorns the entrance to the temple, which further leads to a U-shaped courtyard.

The temple is dedicated to the worship of Lord Vishnu and Lord Shiva, and the deities of both lords align the interior of the temple. Three storey arcades line the perimeter of the courtyard and showcase many sculptures and panels of marvelous beauty and design.

Complex and majestic staircases and bridges link the many different areas of the temple together, adding to the splendor of the place.

As mentioned before, the time when the temple was built and the available technology of the period coupled with the time it took to build and the momentous scope of the construction had left many baffled.

The entire feat would be extremely difficult if not impossible to achieve at that time. However, the video below reveals a theory that may offer an explanation, that extraterrestrials gave a hand in the construction of this temple.