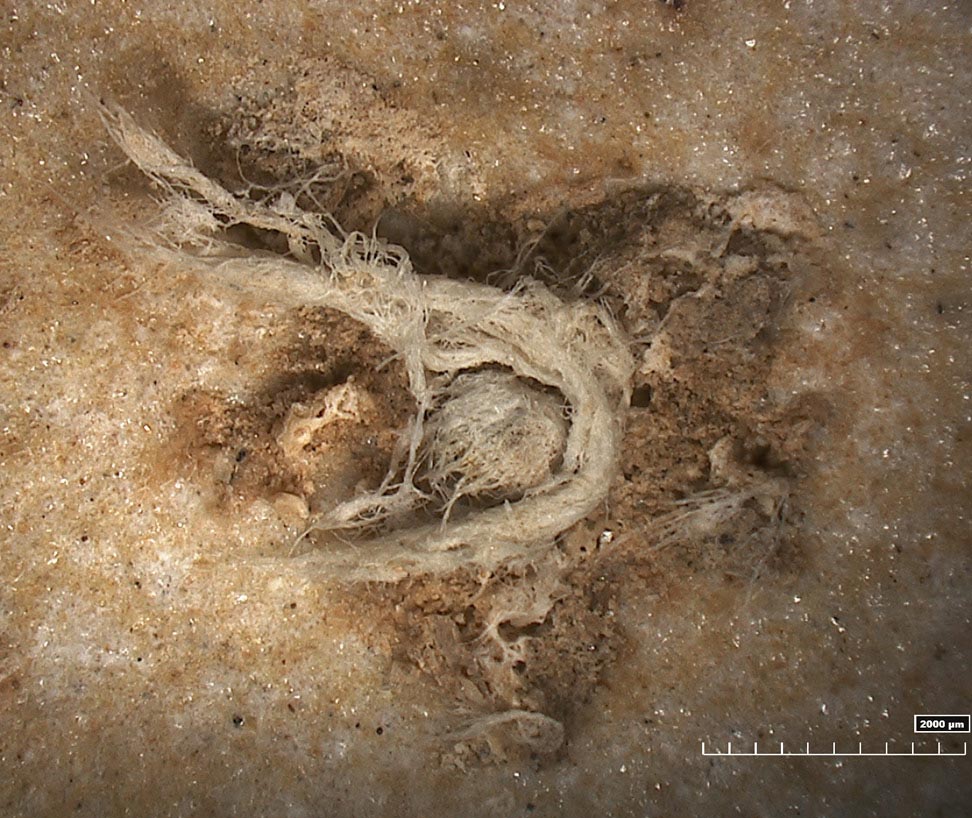 Tiny bits of twisted plant fibres found on an ancient stone tool indicate that sophisticated cords such as string and rope were able to be produced and used by Neanderthals. Cords made from twisted fibres are so ubiquitous today that it’s easy to take them for granted. But they’re a key technology for survival that can be used to make everything from dresses to bags to shelters.

This prehistoric piece of string was preserved on a flint instrument that dates back to around 41,000 to 52,000 years ago, as described in the journal Scientific Reports. It came from a cave-like rock shelter that was once inhabited by Neanderthals in southern France. The discovery adds to growing evidence that our closest extinct human relative wasn’t as dumb as scientists had long assumed.

“They are this sort of ultimate ‘other,’ this creature that is very similar to us yet somehow is supposed to be too stupid to live,” said Bruce Hardy, a paleoanthropologist at Kenyon College in Ohio. He points out that Neanderthals were smart enough to have persisted for hundreds of thousands of years before eventually disappearing around 40,000 years ago.

But understanding their lives has been hard because archaeologists typically only find human remains, animal bones and stone tools. “Almost everything that we want to see is gone,” Hardy said. “And so we have to try to find ways to get as much as we can out of the material that we do have.”

On the surfaces of stone tools, he explains, it’s sometimes possible to find residues of materials that would otherwise decay. How this preservation happens isn’t well understood. But if a tool is put on top of another material, for example, it might create a kind of capsule or micro-environment that can keep things stable.

“Starch grains, bits and pieces of plants, hair, feathers — things like this can all survive,” Hardy said.

He was examining one stone tool when he saw some flecks of white that he then peered at through a microscope. “It was a mass of twisted fibres,” he said. “It was clear that we had something, as soon as I saw it.”

Additional work with a more powerful microscope revealed what looks like a classic structure used to make string. “What we have found is a small fragment of a three-ply cord,” said Hardy, adding that it’s made from fibres that come from the inner bark of some kind of evergreen tree.

“There are three bundles of fibres that are twisted counterclockwise, and then those bundles, once they are twisted, are twisted back the other way, clockwise, around each other to form a cord or string,” he added.

Previously, the oldest known fragment of cord dated back to around 19,000 years ago, from a site in Israel. Scientists had also found impressions left in clay by something that looked like woven fibres, from 27,000 years ago.

Marie-Hélène Moncel of the National Museum of Natural History in Paris, who is part of the research team that worked on this new discovery, said it’s impossible that the twisted structure found on the tool just appeared spontaneously from nature — it had to be intentionally constructed.

“It was amazing,” she said.

And given where the artefact was found, and the other bones and tools found at the site, she said, “It is clear that this is related to Neanderthals,” and not the anatomically modern humans that began showing up in Europe around 40,000 years ago.

John Shea, a paleoanthropologist at Stony Brook University in New York, isn’t so sure.

“The idea that this cordage is necessarily made by Neanderthals, that is open to question,” he said, even if Neanderthal remains were found right nearby. “You still have to keep an open mind. That just means that Neanderthals were present. It doesn’t rule out the possibility that humans were wandering around this same part of the world at the same time.”

Still, he added, “We’ve long suspected that earlier humans and Neanderthals had some kind of cordage, some means by which to attach one thing to another. This is, as far as I know, some of the first definitive proof.”

Cordage was probably in use as far back as half a million years ago, Shea said. He noted that some extremely old stone tools appear to have been made to fit handles, and such tools will work loose from a handle pretty swiftly without glue and cordage to keep it bound tight.

It’s pretty easy to use almost any weed to make cordage, Shea said: “You can make simple cordage in minutes.”

Making high-quality string and rope, however, takes some know-how. And he said there’s no reason to think that Neanderthals wouldn’t be capable of that.

“There’s not one shred, and I mean not even the slightest trace of evidence,” he said, “that Neanderthals were deficient in terms of their intelligence compared to humans.”