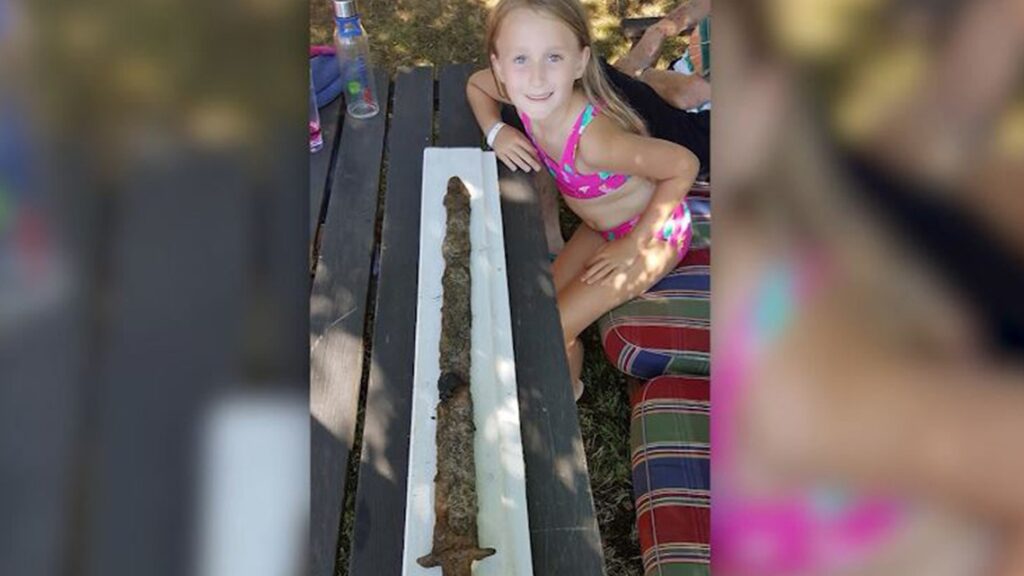 Swedish girl pulled a 1,500-year-old sword out of a lake

An 8- year – old girl on vacation with her family discovered a  pre – Viking Era Sword in a Swedish lake, leading to locals jokingly naming her the “Queen of Sweden.”

As she was exploring the lake, she felt something “odd” beneath her hand and knee.“I picked it up and was going to drop it back in the water, but it had a handle, and I saw that it was a little bit pointy at the end and all rusty. I held it up in the air, and I said ‘Daddy, I found a sword!’ ”

“I’m not sure you should be touching it anymore,” her father responded. “It looks fragile.”

The sword was initially reported to be 1,000 years old, but experts at the local museum now believe it may date to around 1,500 years ago, said the BBC.

“It’s not every day that you step on a sword in the lake,” said Mikael Nordstrom, head of the cultural heritage department at the Jönköpings County Museum.

Officials believe that no one found the sword until now because a drought lowered the level of the water.

Saga’s discovery led the museum and local council to carry out further excavations at the site. They asked the family not to tell anyone about the discovery until they’d checked to see if there were other items of historical interest.

Anyone hoping to see the sword will have to wait at least a year, Nordström told The Local, explaining: “The conservation process takes quite a long time because it’s a complicated environment with wood and leather, so they have several steps to make sure it’s preserved for the future.” Why it has come to be there, we don’t know,” he continued.

“When we searched a couple of weeks ago, we found another prehistoric object; a brooch from around the same period as the sword, so that means – we don’t know yet – but perhaps it’s a place of sacrifice.

At first, we thought it could be graves situated nearby the lake, but we don’t think that anymore.”

The sword prompted teams, which included museum staff, to carry out more searches, though none have resulted in such an important find.

The first led to the discovery of the brooch but the oldest object found in the second search was a coin from the 18th century.

Saga’s father said in an interview with The Local that several friends in the community joked that this discovery made Saga the new Queen of Sweden. The press soon took up the anointing of Saga.

On social media, the news has led to people posting things like “She’s the chosen one!” and “Well that’s it then, she’s the new ruler. We all must pledge our fealty.”

In Arthurian legend, only the king could draw a sword from the stone — and later the Lady in the Lake gives Arthur his sacred sword: Excalibur. As for Saga, she said this discovery hasn’t made her want to pursue a career in archaeology.

She said instead she hopes to be a doctor, vet, or an actress in Paris, although she does enjoy learning about “old stuff.”