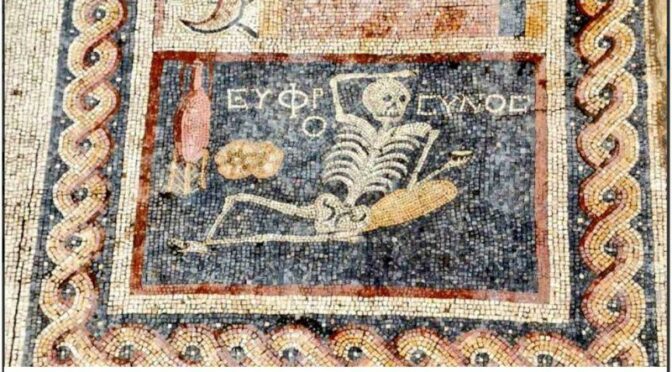 In the ruins of a 3rd Century B.C house, Turkish archaeologists came across an incredible find: a mosaic that features a skeleton with a large loaf of bread and a pitcher of wine.

Besides, the imagery of a skeleton having a blast with the bread and the wine. one section of the three-panel also features an optimistic message  written in Greek that reads: “Be cheerful and live your life.”

The extremely well-preserved ancient mosaic was discovered in a house in Turkey’s southern state, Hatay Province, in the provincial capital of Antakya.

The 3th-century “meme” was discovered during the construction of a cable car system.

An archaeologist from the Hatay Archaeology Museum, Demet Kara explained that the mosaic entitled  “skeleton mosaic,” was an elaborate centrepiece of a mosaic floor in the dining room of the house.

There are three scenes on glass mosaics made of black tiles. Two things are very important among the elite class in the Roman period in terms of social activities: The first is the bath and the second is dinner.

In the first scene, a black person throws fire. That symbolizes the bath. In the middle scene, there is a sundial and a young clothed man running towards it with a bare-headed butler behind.

There is writing on the scene that reads he is late for supper and writing about time on the other.

In the last scene, there is a reckless skeleton with a drinking pot in his hand along with bread and a wine pot.

The writing on it reads ‘be cheerful and live your life,’” explained Kara“[This is] a unique mosaic in Turkey.

There is a similar mosaic in Italy but this one is much more comprehensive.

It is important for the fact that it dates back to the 3rd century B.C.,” “Antiocheia was a very important, rich city. There were mosaic schools and mints in the city. she added.