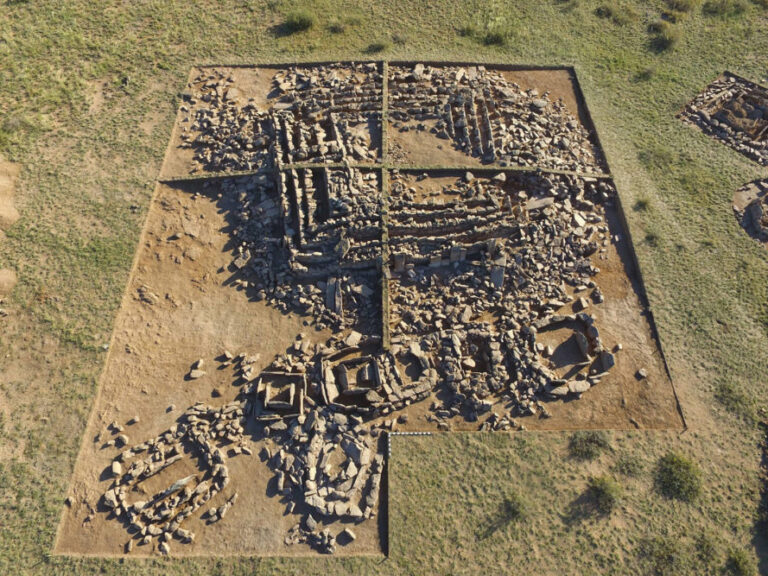 In a remote region of the Kazakhstan steppe, some 3,900 miles northeast of Cairo, a previously unknown Egyptian-style pyramid was discovered. The structure is now mostly in ruins, but it is believed to be a lookalike of the famous Djoser Pyramid in Egypt, constructed some 1,000 years earlier.

Last year, archaeologists discovered it but have kept their ‘sensational discovery’ under wraps until now. The unopened burial chamber of the pyramid complex is to be investigated within days by scientists.

‘It was built more than 3,000 years ago in Saryarke for a local ‘pharaoh’, a leader of a local mighty tribe dating to the Late Bronze epoch,’ said archaeologist Viktor Novozhenov.

‘Work on opening the main burial chamber will begin within days. ‘All finds will be passed to the archaeology museum of Karaganda State University.’

Images released today of what Novozhenov called a ‘sensational find’ show artefacts already unearthed at the site, and the layout of the foundations of the pyramid.

The discovery was made by specialists from the Saryarkinsky Archeology Institute in Karaganda under the leadership of Igor Kukushkin.

‘The shape of this magnificent construction reminds us of the famous Djoser pyramid (in Egypt),’ said Novozhenov.

In Soviet times, Karaganda was nicknamed the ‘middle of nowhere and was a destination for political exiles from many parts of the former USSR. Yet the discovery of the pyramid shows that a rich culture thrived here in the deep past.

Pictures of the archaeological site emerged today highlighting a ‘step mausoleum’ named the Begazinskaya (or Begazin) Pyramid, built between 3,000 and 3,500 years ago.

‘Work is going ahead full speed. This is the team’s second season,’ said Novozhenov.

Archaeologist Viktor Varfolomeev said the mausoleum was found in the Shet district of Karaganda region, in central Kazakhstan, on the right bank of River Talda.

The whole burial includes no less than 27 constructions dating to different epochs. The biggest building has five levels of stone steps.

The burial chamber is slightly over seven metres in diameter. No further details were given of the Kazakhstan find.

Pyramids exist in places other than Egypt, for example, Mexico and China, but this ‘copycat’ would be the first in Kazakhstan.

The Djoser ‘step pyramid’ is an archaeological jewel in the Saqqara necropolis, northwest of the Egyptian city of Memphis. It was built around 2700 years BC for the burial of Pharaoh Djoser.

It is the central feature of a vast mortuary complex in an enormous courtyard surrounded by ceremonial structures and decoration.