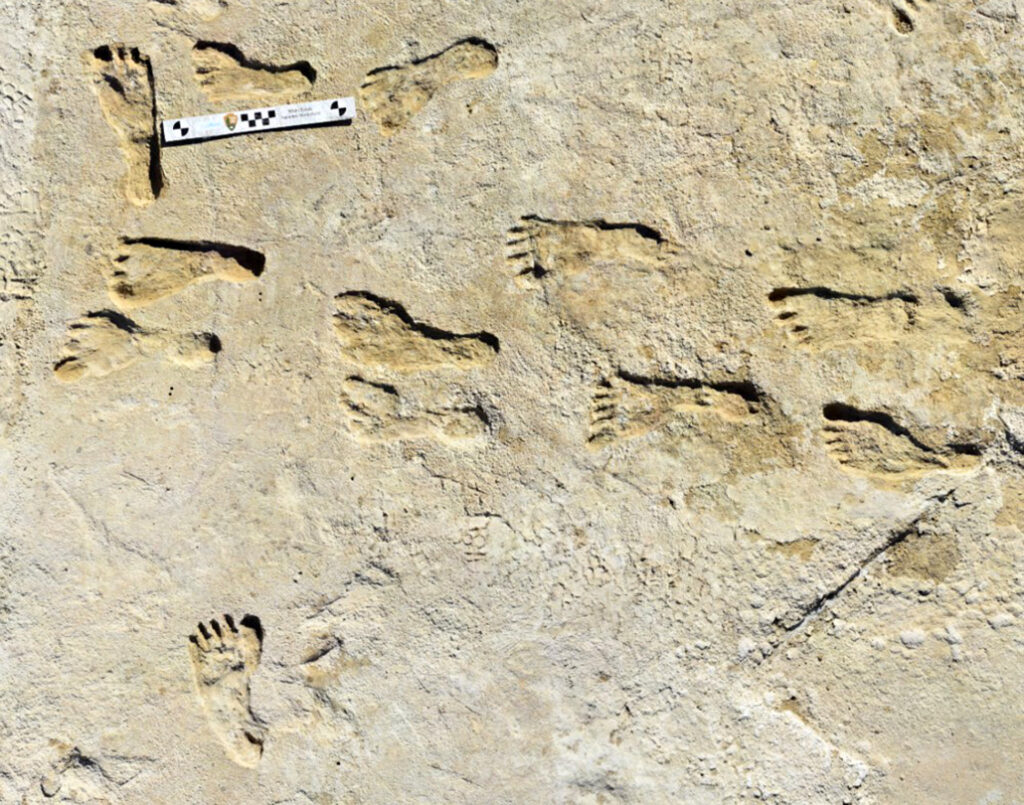 “Questions remain about when and how people migrated, where they originated, and how their arrival affected the established fauna and landscape.”

In the new study, the researchers examined the ancient human footprints in White Sands National Park in New Mexico. The footprints were formed in soft mud on the margins of a shallow lake which now forms part of a large playa called Alkali Flat.

They were first discovered by David Bustos, a resources manager at White Sands National Park.

“It is incredible to have the confirmation on the age of the human prints, and exciting but also sad to know that this is only a small portion of the 80,000 acres where the prints have been revealed bare and are also being rapidly lost to ongoing soil erosion,” Bustos said.

The scientists dated the footprints using radiocarbon dating of seed layers above and below the footprint horizons. The dates range in age and confirm human presence over at least two millennia with the oldest tracks dating from around 23,000 years ago.

“Our dates on the seeds are tightly clustered and maintain stratigraphic order above and below multiple footprint horizons — this was a remarkable outcome,” said Dr Kathleen Springer, a researcher at the U.S. Geological Survey.

“This corresponds to the height of the last glacial cycle, during something known as the Last Glacial Maximum, and makes them the oldest known human footprints in the Americas.”

The White Sands footprints tell an interesting tale of what life was like at this time, with the tracks left mainly by teenagers and younger children, with the occasional adult judging by their size.

“It is an important site because all of the trackways we’ve found there show an interaction of humans in the landscape alongside extinct animals like mammoths and giant sloths,” said Dr Sally Reynolds, a hominin paleoecologist at Bournemouth University.

“We can see the co-existence between humans and animals on the site as a whole, and by being able to accurately date these footprints, we’re building a greater picture of the landscape.”

“The footprints left at White Sands give a picture of what was taking place, teenagers interacting with younger children and adults,” Professor Bennett said.

“We can think of our ancestors as quite functional, hunting and surviving, but what we see here is also activity of play, and of different ages coming together. A true insight into these early people.”

“There has been a lot of debate over many years about the first peopling of the Americas with several early sites identified,” said Professor Vance Holliday, a researcher at the University of Arizona.

“Few archaeologists see reliable evidence for sites older than about 16,000 years. The White Sands tracks provide a much earlier date.”

The discovery is described in a paper published this week in the journal Science.