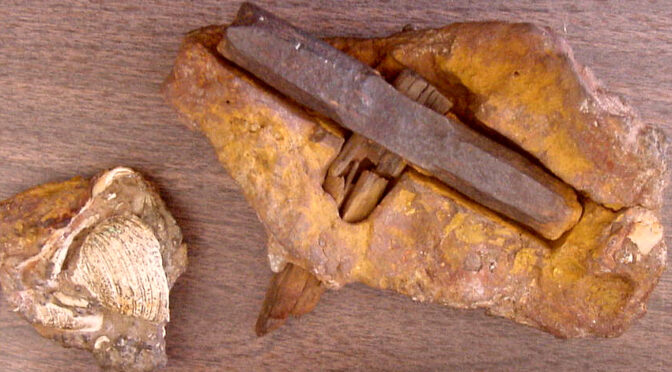 The inner handle underwent the carbonization process, the hammerhead was constructed with iron purity, and this is only possible with modern-day technology, according to research by the Metallurgical Institute of Columbia.

According to analysis, the head of the hammer consists of 97 pure iron, 2 per cent chlorine, and 1 per cent sulfur.

This curious artefact was discovered in the city of London, Texas, USA, in 1934. The hammer appeared embedded inside a rock and since its discovery, there have been many theories about its origin, and most importantly its incredible age.

So how did the hammer end up embedded inside the rock?

Well, for the hammer to finish inside the rock, it had to have been built before the rock was formed and that would be several million years ago according to Livescience.

After its discovery and due to all the questions the hammer raised, researchers decided to abandon the incredible discovery in the Somervell Museum, in Texas.

Surprisingly researchers also found that the iron had undergone a process of purification and hardening, typical of the metallurgy of the twentieth century.

According to analysis, the rock encasing of the hammer was dated to the Ordovician era, more than 400 million years ago.

The portion of stone surrounding the hammer-head also presented abnormalities, seeming to have merged with some type of sheath covering the hammer.

According to geologists, the slow process of petrification dates back hundreds of millions of years.

This has led several ufologists and ancient astronaut theorists to a quick deduction of the context of the incredible discovery leading them to assume not only that there was a human civilization before the historical process of petrification in Texas, but that this ancient civilization already possessed the necessary technology for the fabrication of a hammer with modern features.

Evidence suggesting that the iron from the hammer might have originated from a meteorite is not a possibility according to researchers.

The chemical analysis of the artefact also detected certain amounts of potassium, silicon, chlorine, calcium, and sulfur. Thus, this composition contradicts the hypothesis postulated that the hammer-head belonged to the fragment of a meteorite since the bodies of our solar system do not have that type of chemical composition.

Against the remote possibility that a meteorite with extremely rare and bizarre chemical composition and exceptional morphology, got caught, in prehistoric times, onto a piece of wood just as the head of the discovered hammer imprisons its handle, some researchers and ancient astronaut theorists point toward the fact that our planet was inhabited in ancient times, by civilizations with advanced technical and technological capacity, of which today we only have legends and items like this one who were trapped in rock.

Unfortunately, some scientists do not agree with the theory that an ancient civilization created the hammer, and claim that it was only a metallurgical technique that had been eventually abandoned.

This extraordinary artefact belongs to the list of many other mysterious objects that have been discovered across the globe, and just like the Russian “microchip” or the 300 million-year-old screw, this item has caused debate among researchers and historians who are divided into groups, supporting and denying the possibility that the human race is much older than previously thought.

Whether this artefact is indeed a hammer dating back hundreds of millions of years, is something that will fuel debate among supporters of the ancient astronaut theory and conventional archaeologists, who both have provided arguments explaining the origin and age of the hammer.