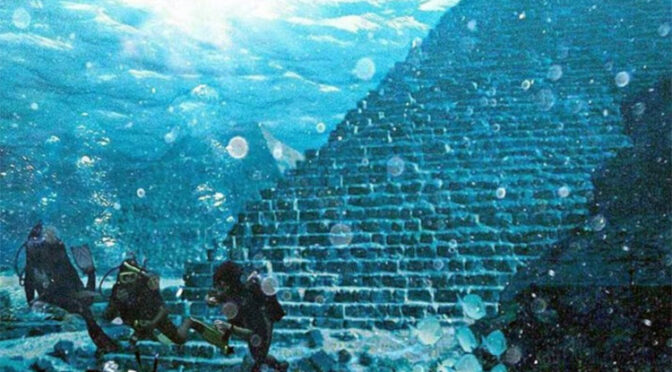 According to an official Portuguese news article, the Portuguese Navy is exploring a massive underwater pyramid close to the Azores. If this is the abandoned city of Atlantis or whether the pyramid is of extra-terrestrial origin is still debated by some people.

Some other more grounded scholars claim this may be part of a larger map incorporating the pyramids found at Giza in Egypt.

A pyramid was accidentally found under the water, close to the Azores when a local sailor was looking for good fishing grounds. He used digital scanning devices to help him locate the Pyramid.

The 9 islands that make up the Azorean archipelago we now know as the Azores were discovered uninhabited by the Portuguese in 1427. In recent years archaeologists have discovered ancient rock art on the island of Terceira, which they believe to be many thousands of years old.

They have also discovered a  variety of ancient archaeological remains on all nine islands. They have been identified as an epigraph from Roman times, Carthaginian sanctuaries, cave art, and megalithic structures. It would seem there is a lot more history to these islands that pre-date 1427.

The underwater pyramid was discovered by Diocleciano Silva between the islands of Terceira and São Miguel. It is said that the structure is perfectly square and oriented by cardinal points.

Using current GPS digital technology it is estimated that the pyramid is around 60 meters high and has a base of nearly 8,000 square meters. That is pretty big!

The Portuguese Hydrographic Institute of the Navy is studying the pyramid data to determine whether it is man-made, naturally occurring, or even something more interesting. Extra-terrestrial perhaps? I wonder if Mulder and Scully are investigating!

The pyramid is found in an area of the Atlantic that has been covered by water for around 20,000 years. That time coincides with the last great ice age of the northern hemisphere where the glaciers started melting 2,000 years earlier. Whoever was living there before the ice age, human or not was probably responsible for building the pyramid.

So far the Portuguese Navy has not determined the origins of the pyramid. It is surprising that this has not been reported before or even discovered before. Was it kept secret or had it sat there for years unnoticed?

What is hard to believe is that the area is heavily studied for its volcanic activity by the NOAA, which studies volcanic behaviour. You would have thought that they would have found the pyramid through sonar imaging.  So was it kept secret until Diocleciano Silva found it and went public or is he the first person to actually find this incredible mystery?

Some people even think it might not be real and is instead a hoax but that theory seems unlikely especially as pyramids are evident all across the globe with new ones being discovered every now and then.

Archaeologists from the Portuguese Association of Archaeological Research have found evidence on Pico Island that suggests humans did live in the area many thousands of years before the Portuguese discovered the uninhabited Azores.

This adds support to the idea that an ancient civilization was there at the time to build the huge pyramid. There is still no explanation as to who created the rock art found on the islands or why.

So who did build the underwater pyramid? Was it built by a great ancient civilization that spanned the globe from South America to Africa and the East?

Pyramids are found across many continents, was this one giant civilization? Is this the fabled lost continent of Atlantis that connected the distant civilizations together? Or is it not man-made and perhaps Extra-terrestrial in origin?

The Azores themselves are a chain of 9 volcanic islands in three main groups situated 930 miles west of Lisbon. They sit around the fault lines between the tectonic plates of the North American, Eurasian and African continents. The energetic qualities of that area are a great place to have a pyramid. Pyramids are supposed to collect and concentrate energy in positive ways.

This video shows the spot where the pyramid might be along with some discussion about the validity of the claims.

The coordinates of the pyramid have not been released to the public, why? We are not sure maybe it is to prevent tomb robbers and Lara Croft from visiting or maybe there are other important secrets that they need to keep quiet for now. What is believed is that there could be two more pyramids in the area and that there could be a design link with those found in Egypt which forms a land-based representation of a star constellation.

Adding to the theory that these pyramids were created by people from the stars or that our ancients knew we were created by aliens in ‘their image’ and not native to this planet. These giant star maps could be the real clue to the history of mankind’s origin.

An interesting video about the underwater pyramid and other possible structures in and around the Azores, the Canary Islands, Antarctica, and the Atlantic sea.