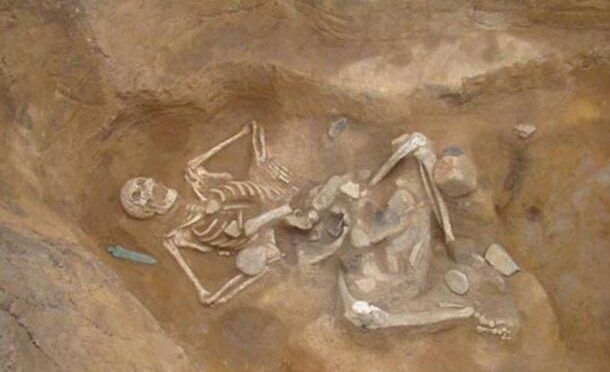 The remains of what archaeologists in Bulgaria identified as a “massive skeleton” have been discovered in downtown Varna, a city on the shores of the Black Sea which is rich in culture and civilisation for 7,000 years.

Sofia News Agency, Novinite, reports that the skeleton was found in what was once the ancient city of Odessos, a trading post established by the Greeks towards the end of the 7th century BC.

Odessos was a mixed community made up of Ionian Greeks and the Thracian tribes (Getae, Krobyzoi, Terizi). Later it was controlled by the Thracians, Macedonians, and then Romans.

Researchers have said that initial analyses suggest the skeleton belongs to a man who lived in the late 4th or early 5th century AD, a time when Odessus was an early Christian centre.

Valeri Yotov, who is part of the team carrying out excavations there, is reported as telling local news websites that the size of the bones is “impressive” and that they belonged to “a very tall man”. However, Yotov would not reveal the exact height of the skeleton.

The remains were found near the remains of the ancient city wall and Yotov has suggested that the man may have died while working or during a ceremony held near the city walls.

“His posture, with hands laid on his waist and his body pointing to the east (head) and west (feet), is a clear indication for archaeologists he was buried,” reports Novinite.

It is not the first time that an oversized skeleton has been found in Eastern Europe. In 2013, the skeleton of a giant warrior dating back to 1600 BC was found in Santa Mare, Romania.

Nicknamed ‘Goliath’, the warrior measured more than 2 meters in height, highly unusually for the time and place, when people were of small stature (approximately 1.5 meters on average).

The warrior was buried with an impressive dagger that indicated his high stature.