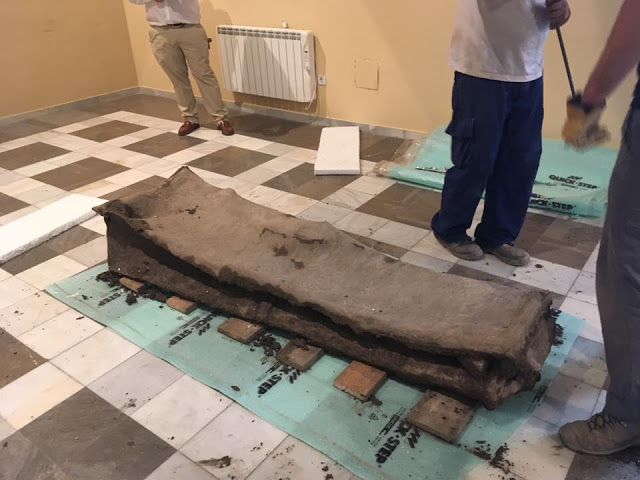 When archaeologists began exploring underneath a building in Granada, in the southern Spanish region of Andalusia, they weren’t expecting to find anything of importance.

After all, they were just completing a standard prospection of the Villamena building, as required for any planned underground work in the city to rule out the existence of historic remains.

The survey was going ahead as planned. They found a few remains from the Christian era and from the days of Muslim rule, but nothing truly relevant.

But before finishing the work, they decided to explore a little deeper. And that’s when they found it: a Roman grave covered with sandstone and mud, 2.5 meters below the surface.

For Ángel Rodríguez, the archaeologist in charge of the survey, the discovery was not a big surprise at first – not until they removed the slab and found a lead sarcophagus underneath. Now, this was certainly unexpected.

Rodríguez believes the sarcophagus dates back to the 2nd or 3rd century AD, a time when lead sarcophagi were not at all common.

In Andalusia, they were expensive as well as difficult to obtain, because the industry only existed in Córdoba, over 200 kilometres away. “Córdoba is the only place where they made lead sarcophagi,” Rodríguez explains.

According to this expert, the sarcophagus “probably belonged to a wealthy family, but that doesn’t mean that we are going to find great jewels inside.” The items buried inside may not be that valuable, given that precious goods were left “for the living,” says the archaeologist.

The main interest in this type of sarcophagus comes from the fact that lead conserves remains very well. This means that, if all goes as the archaeologist’s hope, inside there will be a body, personal valuables, and textiles in good condition, which will allow the team to “learn a lot about the burial ritual,” says Rodríguez.

The sarcophagus was moved last week to the Archaeological and Ethnological Museum of Granada. It will remain there until researchers decide on how to proceed with the opening.

A multidisciplinary team of physical anthropologists, restorers and archaeologists will be present for the exciting reveal. Once opened, the body will go to the forensic anthropology laboratory at Granada University, while the sarcophagus and goods inside will remain in the museum to be studied, explains Rodríguez.

In Roman times, the historic center of Granada was actually a rural area on the outskirts of the city, and the real epicenter was the Albaicín district.

But there was something interesting about the area: the Darro river ran through it. The river stopped flowing overground more than a century ago in this part of the city when it was buried underground.

This was where the sarcophagus was found. Rodríguez explains that this area, on the banks of the Darro, was used to grow crops, “it was not a cemetery, but perhaps because of the Darro river, it had a special meaning as a funeral area.”

According to the archaeologist, a similar lead sarcophagus was discovered in 1902, but it was plundered by the workers who found it before it reached researchers, who only found “some bones.”

The lead sarcophagus found under the Villamena building, next to Granada Cathedral, weighs between 300 and 350 kilograms and has the same dimensions of a classic coffin: 1.97 meters long and 40 centimeters high. It is slightly wider at the head (56 centimeters) than at the foot (36 centimeters).

On the first inspection, Rodríguez says there is no sign of an inscription but adds that “it still has a lot of clay and sand,” and “we’ll see when we clean it.”

The outside of the sarcophagus has already given researchers many insights, and the inside is expected to give many more when it is opened in a few weeks.