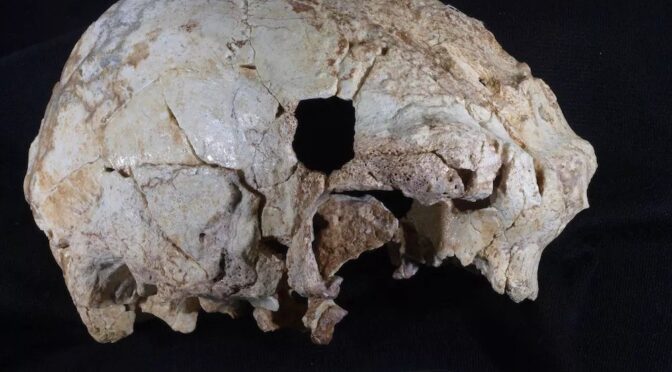 Is This 400,000-Year-Old Hominin the Great Grandpa of Neanderthals?

According to new research, a 400,000-year-old hominid skull contains a few telltale features that imply it’s more of a Neanderthal than a Homo sapiens relation, a new study finds.

The cranium, discovered in a Portuguese cave, is helping anthropologists understand how hominins, particularly Neanderthals, evolved during the middle Pleistocene epoch in Europe, the researchers said.

The team isn’t sure whether the skull belongs to a newfound species of hominin, but noted that the skull appeared “broadly ancestral” to the Neanderthals, said study co-researcher Rolf Quam, an associate professor of biological anthropology at Binghamton University in New York.

In addition, the scientists unearthed hand axes in the cave, a stone-crafted technology that was likely developed in the Middle East about 500,000 years ago.

Thanks to the excavations, researchers now have proof that this technology spread as far west as Portugal within 100,000 years of being developed in the Middle East, Quam said.

Researchers found the skull on the last day of their field season in 2014. During previous fieldwork at the Gruta da Aroeira cave from 1998 to 2002, researchers found human teeth, animal remains and stone-made hand axes. But the latest discovery, the skull, was the excavation’s prize find, Quam said.

The team discovered the cranium in the back of the cave, buried in petrified sediment.

“The archaeologists, when they found it, weren’t sure how to get it out,” Quam told Live Science. “They basically had to use a circular saw to cut out a huge block chunk that included the skull.”

The researchers brought the block to a restoration laboratory in Madrid, and a fossil preparator spent 2.5 years extracting the skull.

“That is an incredible amount of labour to get this thing out,” Quam said.

Once they freed the skull, the researchers put it in computed tomography (CT) scanner, which allowed them to create a 3D virtual reconstruction of the bone.

“The skull is only half a skull,” Quam said. “With the CT scans, we were able to mirror-image it and make the other half, so it’s more complete now.”

The skull, nicknamed the “Aroeira cranium” after the Portuguese cave in which the item was found, is the oldest hominin fossil ever discovered in Portugal, Quam said. (A hominin is a group that includes modern humans and their recent ancestors, including Neanderthals, Homo erectus, Homo habilis and several species of Australopithecus.)

With a cranial capacity of more than 67 cubic inches (1,100 cubic centimetres), the Aroeira skull is about the same size as other hominin skulls found from that time period.

Modern humans have larger cranial capacities, of about 79 cubic inches (1,300 cubic cm), according to the Institute of Human Origins at Arizona State University, which was not involved with the new study.

However, the Aroeira individual lived long before the Neanderthals, which existed from about 200,000 years ago to 40,000 years ago, when they went extinct. Still, the skull “can help us understand the origin and evolution of Neanderthals better,” Quam said. “The fact that it is so well-dated is critical because that’s going to help us think about the evolutionary process — what changed first” as Neanderthals emerged on Earth.