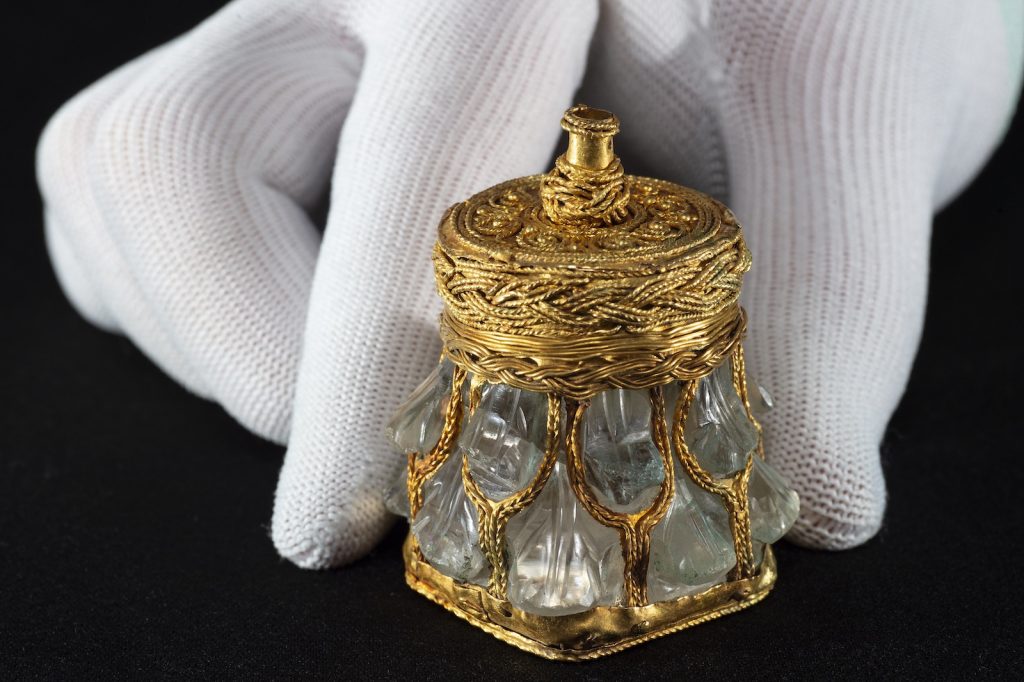 Wrapped in textiles and caked in dirt from where it was found southwest Scotland, the object didn’t look like much at first. Years of a careful cleaning, however, have finally revealed a stunning rock crystal jar wrapped in gold, reports Dayla Alberge of the Guardian. In addition, researchers have discovered a Latin inscription on it that refers to a previously unknown bishop.

The artefact, first discovered in 2014, is one of several items comprising the Galloway Hoard, a collection of rare Viking-age objects found in Britain or Ireland, dated to around the tenth century.

In 2017, the collection was acquired by National Museums Scotland as part of a three-year conservation effort—funded in part by a $1.3 million grant from the Arts and Humanities Research Council and in partnership with the University of Glasgow.

The jar was found wrapped inside of a textile pouch and had proven difficult for scientists to examine due to the delicate nature of the fabric surrounding it. Researchers were recently able to use 3-D X-ray imaging to view the item without disturbing its wrappings.

The scan uncovered etched, gold lettering at the bottom of the jar that read “Bishop Hyguald had me made,” reports Jeevan Ravindran for CNN Style. Experts say this indicates that the artefact may have hailed from a church in the kingdom of Northumbria, an early medieval Anglo-Saxon kingdom comprising modern-day northern England and southern Scotland.

“The inscription is in Latin, which was the universal language of the Western Church in those days,” says Alex Woolf, senior lecturer at the University of St. Andrews, in a museum statement. “The sources and records of the period are incomplete, but what we do know from them is that there were several ecclesiastics in early Medieval Northumbria with the name Hyguald.”

“We don’t know of a Bishop Hyguald, specifically, but our lists of Northumbrian bishops are incomplete after 810 [C.E.],” he says. “[…]it may well be that what we’re looking at is an otherwise undocumented mid-ninth century bishop.”

The hoard was found six years ago by a metal detectorist in a ploughed field in Dumfries and Galloway, a region of southwestern Scotland on the border with England. The collection includes more than 100 gold and silver items, along with other artefacts, from the Anglo-Saxon kingdoms, Ireland and Asia, buried more than 1,000 years ago.

The jar measures about two inches tall and was crafted from rock crystal. It is wrapped in gold wire and includes filigrees of ornamental gold decorations.

Although the hoard collection dates to around the tenth century, researchers believe the jar itself might be may be much older and was possibly a gift from the Roman Empire to the Anglo Saxons used to hold perfume or a liquid “of great value,” reports CNN.

“This is unique in early medieval Britain but there are parallels within the Roman Empire for objects of this type,” says Martin Goldberg, senior curator for the National Museums Scotland’s early medieval and Viking collections, in the museum statement.

“The ones that I have seen are in the Vatican collection, where there are different forms of carved crystal columns. And so it was maybe 500 years old by the time it was transformed in the late eighth or early ninth century into a gold-wrapped jar.”

The Galloway Hoard is one of the richest collections of Viking-age objects found in Britain or Ireland, according to the museum. The rock crystal jar, though, is a rare find, says Leslie Webster, former keeper of Britain, prehistory and Europe at the British Museum.

“Rock crystal is unusual in itself,” she says in the museum statement. “It is one of those materials that was greatly prized in the antique world, for its transparency and translucency, and so it’s associated with purity…

This object is absolutely fascinating. I’ve seen a lot of Anglo-Saxon finds over the years in my professional career, some of them amazing. But this absolutely knocks them all into a cocked hat.”

Archaeologists speculate that the Galloway Hoard was buried around 900 C.E. when Vikings were known to loot monasteries. They believe the artefacts may have been stashed by the raiders or hidden by someone fearing an attack, according to the Daily Mail.

The Galloway Hoard is currently on display at Kirkcudbright Galleries until July 2022.