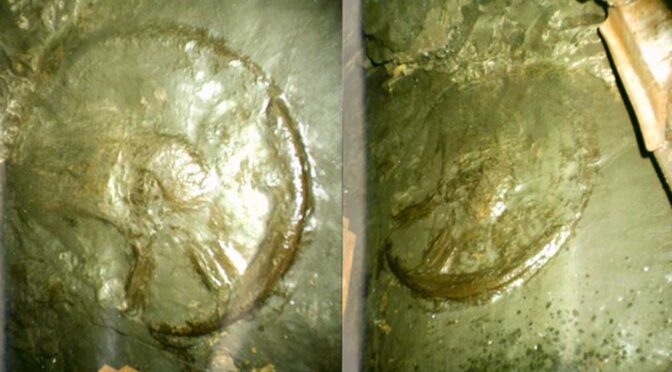 The rare find was made in the Ukrainian town of Donetsk, down a coal mine. As it could not be safely or successfully cut out due to the nature of the sandstone in which it was embedded, the mysterious artefact looking much like an ancient wheel remains in situ down the mine.

While drilling the coal coking stratum J3 ‘ Sukhodolsky ‘ from the surface at a depth of 900 meters (2952,76 feet), workers were surprised to find what appears to be the imprint of a wheel above them in the sandstone roof of the tunnel that they had just excavated.

Fortunately, Deputy Chief V.V. Kruzhilin took photographs of the rare imprint and exchanged them with my Chief foreman S. Kasatkin, who brought news of the find to light.

After further investigating this site and carefully examining the imprint at close hand, we are left with only the photographs as evidence of their existence (there was more than one imprint) and the word of a group of Ukrainian miners.

Without being able to definitively date the strata in which the fossilized wheel print was found, it has been noted that the Rostov region surrounding Donetsk is situated upon Carboniferous rock aged between 360-300 million years ago, and the widely distributed coking coals have derived from the middle to late Carboniferous; suggesting a possible age of the imprint at around 300 million years old.

This would mean that an actual wheel became stuck millions of years ago and dissolved over time due to a process called diagenesis, where sediments are lithified into sedimentary rocks, as is common with fossil remains.

The following is an extract from a letter written by S. Kasatkin (translated from Ukrainian) in reference to his testimony of having been witness to the anomalous wheel imprint discovered by his team of miners.

‘This finding is not a PR action, we as a team of engineers and workers asked the mine director to invite scientists for a detailed examination of the object, but the director, following the instructions of the then owner of the mine, prohibited such talks and instead only ordered to accelerate work on passing through this section of lava and on fast ‘charging’ of the section with mining equipment.

Owing to that, this artefact and the smaller one found during further work came to be in a tunnel blockage and could not be taken out and studied. It is good that there were people, who in spite of the director’s prohibition, photographed this artefact.

I have connections with the people who first discovered these imprints and also with those who photographed them. We have more than a dozen witnesses. As you understand, the admission in the mine is strictly limited (it is dangerous on sudden emissions) and to obtain such permission is rather difficult.

The ‘wheel’ was printed on the sandstone of the roof. Guys (drifters) tried to ‘cut-away’ the find with pick hammers and to take it out to the surface, but sandstone was so strong (firm) that, having been afraid to damage a print, they have left it in place.

At present, the mine is closed and access to the ‘object’ is impossible – the equipment is dismantled and the given layers are already flooded.’

With only this written testimony and that of the other witnesses, the photographs remain the only proof of this anomalous imprint, but it must be deemed worthy of a mention despite any difficulties verifying the details beyond that which you have read.

For, if the photographic evidence is indeed legitimate, then one must question how a man-made wheel became embedded in such ancient strata when according to scientific orthodoxy man had not even evolved yet.