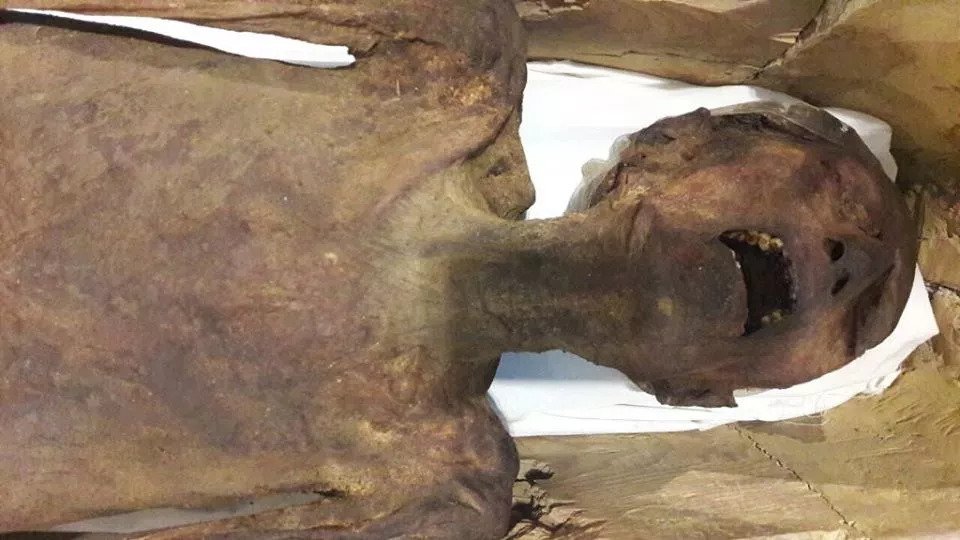 The mystery of ‘The Screaming Mummy’ is finally revealed, and it’s chilling

He’s back. Prince Pentawere, a man who tried (probably successfully) to murder his own father, Pharaoh Ramesses III, and later took his own life after he was put on trial, is now on public display at the Egyptian Museum in Cairo.

Pentawere’s mummy, popularly known as the “screaming mummy,” was not properly mummified. No embalming fluid was used, and his body was allowed to naturally mummify, with his mouth agape and his facial muscles strained in order to make it appear as if the mummy were screaming.

Whether he died screaming or whether he was made to look like that after death is unclear.

Those burying him then wrapped his body in sheepskin, a material the ancient Egyptians considered to be ritually impure.

Eventually, someone placed Pentawere’s mummy in a cache of other mummies in a tomb at Deir el-Bahari.

The scientists also performed genetic analysis, which confirmed that the “screaming mummy” was a son of Ramesses III. And, based on the mummy’s unusual burial treatment, the researchers confirmed that it is likely Pentawere’s mummy.

To kill a pharaoh

The Judicial Papyrus of Turin, as modern-day scholars call it, is a manuscript that documents the trials that occurred after Pentawere’s apparently successful attempt at killing his father in 1155 B.C.

A group of butlers who remained loyal to Ramesses III — and his successor, Ramesses IV — oversaw the trial of a vast number of people who had allegedly aided Pentawere, condemning them to death or mutilation.

These conspirators included military and civil officials, women in the royal harem (where the murder of Ramesses III may have happened), and a number of men who were in charge of the royal harem.

Prince Pentawere was allegedly assisted by his mother, a woman named Tiye (no relation to King Tutankhamun), who was one of Ramesses III’s wives.

The judicial papyrus says that Prince Pentawere “was brought in because he had been in collusion with Tiye, his mother, when she had plotted the matters with the women of the harem” (translation by A. de Buck).

Pentawere “was placed before the butlers in order to be examined; they found him guilty; they left him where he was; he took his own life,” the papyrus says.

How exactly Pentawere killed himself is a matter of debate among scholars, with poisoning and hanging (or a combination of the two) generally regarded as being the most likely methods.

While the dead Pharaoh Ramesses III was initially buried in a tomb in the Valley of the Kings, his mummy was moved after the robbery of his tomb. Interestingly, his mummy was dumped in the same mummy cache at Deir el-Bahari as Pentawere’s.

The mummies of the murdered father and his killer son rested together until the family of a man named Abd el-Rassul found the cache in the 19th century.

The screaming mummy is only being displayed temporarily. The display of the mummy has received widespread media attention and it is not clear how long it will be displayed.