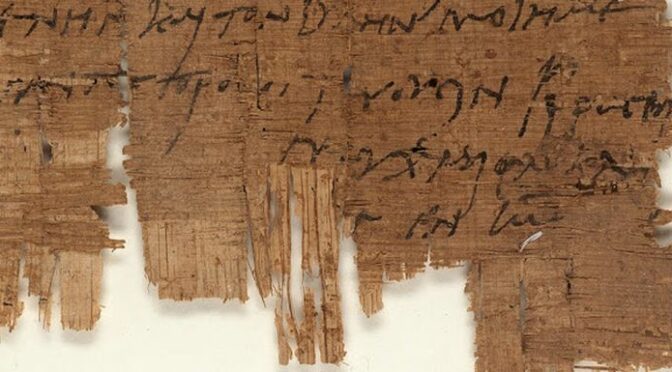 Egypt played a very significant role in the history of early Christianity. A researcher has announced that she has found the earliest known Christian letter, which was written in Roman Egypt in the 3rd century AD.

The contents of this letter are challenging assumptions about the early followers of Jesus Christ and their world.

Dated from circa 230s AD, the document P.Bas. 2.43 sheds light on the lives of the first Christians of the Roman Empire during a time when they were actively persecuted by the state authorities, especially in the urban areas.

Intriguingly enough, the letter P.Bas. 2.43 paints a picture of how the Christians had it relatively better in Roman Egypt.

To that end, many of these Christians preferred to reside in the Egyptian hinterlands – where they tended to have political leadership and were able to follow a syncretic mode of religion combining both Christianity and native paganism.

As for the actual contents of the document P.Bas. 2.43, dating from circa 230s AD, the letter is addressed from a man named Arrianus to his brother Paulus.

Eschewing the typical Greco-Roman greeting formula, it reports the family matters, puts forth a query for the best fish sauce as a souvenir, and then ends with the expressed wish that his brother will prosper “in the Lord.”

In essence, the ancient author uses the abbreviated form of the Christian phrase, also known as the nomen sacrum, “I pray that you farewell ‘in the Lord’”, thereby representing the Christian beliefs of the writer.

Such a form of greeting matches with the New Testament manuscripts rather than the Greco-Roman greeting template expected from the Roman-Egyptian author.

Furthermore, the very name Paulus (of the letter’s intended recipient) was very rare during the era. And interestingly, it suggests how parents were already beginning to name their children after the famed apostle Paul as early as 200 AD.

As for the historicity of the letter P.Bas. 2.43, prosopographical research carried out by experts at the University of Basel revealed that the document is around four to five decades older than the other known Christian letters from around the world.

Moreover, the letter, having its origins in the village of Theadelphia in central Egypt, also alludes to the social background of the author and the recipient and how they were members of an educated, provincial elite, possibly being landowners and even public officials.

And lastly, as for the Basel papyrus collection, the compilation boasts around 65 documents of various origins, ranging from Ptolemaic, Roman, to Eastern Roman (Byzantine).

Most of them are composed of documentary papyri that provide context to the social, cultural, and religious scope of the era via the records of the daily lives of the people who lived around two millennia ago.