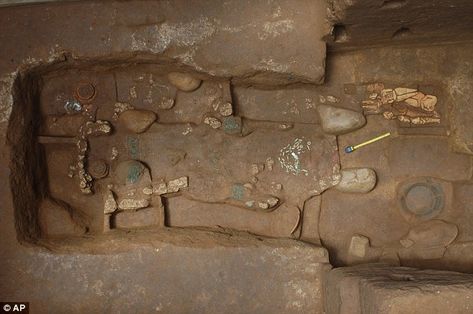 Grave of the king who laid foundations for Mayan civilization in 700 B.C. unearthed

This is the extraordinary grave of an ancient king credited with laying the foundations for the Mayan civilization more than 2,000 years ago, which has been discovered by archaeologists in Guatemala.

Researchers said they uncovered the grave of King K’utz Chman, a priest who is believed to have reigned around 700 B.C., at the Tak’alik Ab’aj dig in Retalhuleu, in the southwest of the country.

Packed with jade jewels and other artefacts, it is the oldest royal Mayan burial ground ever found.

‘He was the big chief,’ government archaeologist Miguel Orrego said. ‘The ruler who bridged the gaps between Olmec (pre-Mayan) and Mayan cultures and initiated the slow transition to Mayan rule.’

Historians believe he was the first leader to introduce elements that would define Mayan culture, such as building pyramids instead of square structures and carving sculptures that profiled royal families.

Guatemala is studded with ruins from the ancient Mayan civilization, which thrived between A.D. 250 and 800 and extended from modern-day Honduras to central Mexico. The Olmec Empire began to fade around 400 B.C. while Mayans grew in number and wrested control of trade routes.

Inside the grave, the team found glistening jade jewels including a necklace with a pendant carved in the shape of a vulture’s head, a symbol that represented power and high economic status, and that was given to respected elder men.

This symbol gives this burial greater importance,’ Mr. Orrego said. ‘This glyph says he (is) one of the earliest rulers of Tak’alik Ab’aj.’

Scientists found the grave last year, but it has taken until now for experts to verify it belonged to K’utz Chman.

Although no human remains were found at the site, the carbon-dated artefacts suggest that the king was buried between 770 to 510 B.C.

‘The richness of the artefacts tells us he was an important and powerful religious leader,’ archaeologist Christa Schieber said. ‘He was very likely the person who began to make the changes in the system and transition into the Mayan world.’

Experts said the array of jade articles in the tomb could provide clues about production and trade.

Susan Gillespie, an archaeologist at the University of Florida who was not involved in the excavation, spoke about the find.

She said older tombs have been found from ruling circles at the Mayan site of Copan in Honduras as well as in southern Mexico, where the pre-Mayan Olmec culture flourished.

Olmec influences are present in the area around Tak’alik Ab’aj, indicating possible links.

She said that because it is near a jadeite production centre, the find could shed light on early techniques and trade in the stone, which was considered by the Maya to have sacred properties.