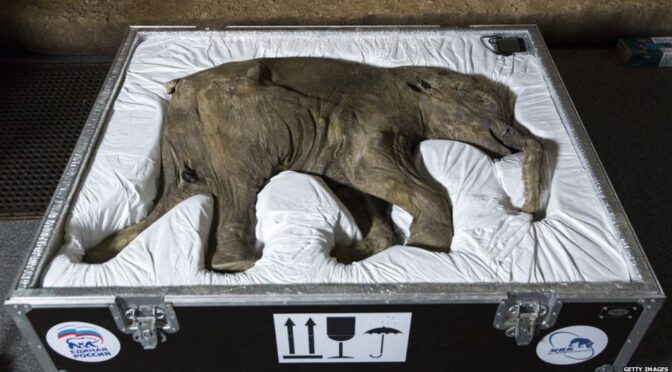 Baby lyuba, the worlds most complete and Best-Preserved Woolly Mammoth

She is 42,000 years old and has come a long way for her Australian debut. First, she was recovered from the frozen mud in Siberia that was her tomb for so long. Then she was packed into a crate at a tiny museum in Russia and flown to a humidity-controlled cube at the Australian Museum.

Mammoths – Giants of the ice age

The ice age world of woolly mammoths will be brought to life in Mammoths – Giants of the Ice Age, exclusive to the Australian Museum from 17 November 2017.

Baby Lyuba, the world’s most complete and best-preserved woolly mammoth, has arrived in Sydney. She is in remarkable condition, with her skin and internal organs intact. Scientists even found her mother’s milk in her belly.

We will finally be able to see her when she is unveiled as the centrepiece of the museum’s Mammoths – Giants of the Ice Age exhibition.

Lyuba, who died at 35 days, is one of Russia’s national treasures, and the government is reluctant to let her out of its sight too often. This is only the fifth time Shemanovsky Museum has let her out, and it’s her first trip to the southern hemisphere.

The mammoth was first spotted in 2007 by Yuri Khudi, a Siberian reindeer herder, who found her as the frost thawed on a muddy bank of the Yuribey River. When he brought a team of scientists back to recover her, she was gone; someone else had got there first.

The team tracked her to a village deep within Siberia’s frozen wasteland. She was propped up on the door of a shop. The shopkeeper had reportedly bought her for two snowmobiles and a year’s worth of food from Mr Khudi’s cousin.

“And while she was propped up, a dog came up and chewed off her tail and her ear. If only for that she’d be completely intact,” says Trevor Ahearn​, the Australian Museum’s creative producer.

Lyuba (Lay-oo-bah) means love in Russian. The museum has chosen to surround her with models of huge, ferocious adult mammoths, much as the herd would have surrounded and protected her in life.

It is thought her feet had become stuck in a muddy hole on the side of a Siberian riverbank. Before her mother could yank her out, Lyuba slipped below the surface, where the mud choked her mouth and trunk.

But the mud that killed her also contained sediments and bacteria that created an acid barrier around her body, in effect pickling her. When the river froze over, she was left perfectly preserved.

Had she lived a full mammoth life – 60 years – Lyuba would have grown to more than three metres in height and about five tonnes. To sustain that bodyweight she would have consumed up to 180 kilograms of grass and 80 litres of water a day.

Mammoths lived in the late Paleolithic period, which stretched from about 200,000 BC, the time Homo sapiens first emerged in Africa, to 10,000 BC.

Mammoths were uniquely adapted for the conditions, with small ears and thick, woolly fur. They ate grass and bark and roamed across Europe, North America and Siberia.

That makes Lyuba the first of her kind to visit our shores, and it took the Australian Museum a fair bit of what director Kim McKay terms “cultural diplomacy” to get her over here. Negotiations involved the Shemanovsky Museum and the Russian government.

Mr Ahearn says: “One of the first things we had to do before we brought Lyuba over here was absolutely guarantee our Russian colleagues that there was no possibility of her getting seized because there is some controversy over who owns her.

“She’s a little controversial in Russia, with her association with an oil company that helped bring her into the museum. I think it’s paranoia. Russia is feeling a little bit of pressure, so I don’t know if it’s founded. There are lots of myths; it’s all very hazy.”

The prospect of mammoth cloning

Scientists have two competing theories on why mammoths became extinct about 10,000 years ago. Both have important things to tell us about the modern environment – and perhaps contain a message about why we shouldn’t be trying to bring mammoths back.

The first theory is climate change. The ending of the ice age about 10,000 BC may have dramatically reduced the area in which these cold-environment animals could survive.

The second theory is over-hunting. Mammoths, with their tonnes of fat, would have represented an incredibly valuable food source for early humans, who developed sharp spears to hunt them. Scientists think it is possible the mammoth is the first species humanity managed to push into extinction.

Mammoth cloning has always excited the popular imagination, and the exhibition dedicates a section to the possibilities. So far, we have sequenced about 70 per cent of mammoth DNA, so the raw material is not there yet. But even if we could, we shouldn’t, says David Alquezar​, manager of the Australian Museum’s genetics lab.

“The money to do that could be better invested in species that are endangered right now, rather than focusing our efforts on a species that has been extinct for 10,000 years,” says Dr Alquezar.