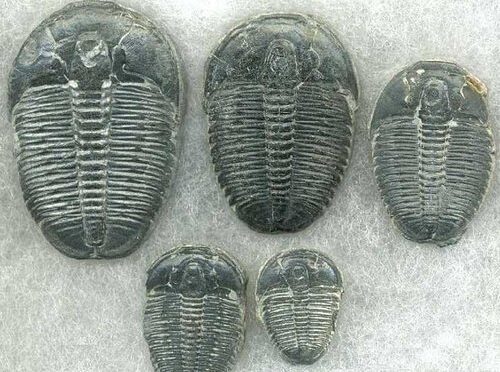 Hundreds of millions of years ago someone with shoes walked on an ancient trilobite. The amateur fossil hunter William J. Meister found a lifetime discovery 43 kilometres west of Delta, Utah, in the summer of 1968, he found a fossilized human footprint about the size of a US 13 shoe (3.5″W x 10.25″L) stepping on a trilobite. Now, trilobites only existed between 260 to 600 million years ago, so this makes it the oldest human fossil footprint ever discovered!

Trilobites were small marine invertebrates related to crabs and shrimps. Scientists currently think humans emerged 1 or 2 million years ago and only began wearing such shoes a few thousand years ago.

This archaeological discovery could be sufficient to overturn all conventionally accepted ideas of human and geological evolution. According to science’s currently accepted timeline of human existence on this planet, humans advanced enough to wear shoes that would not have existed hundreds of millions of years ago. As one might expect, this sent shockwaves throughout the scientific communities with excitement for a new paradigm shift as well as skeptical denial.

Meister took the rock to a professor of metallurgy at the University of Utah, Melvin Cook, who suggested he show it to the university’s geologists. But none of the geologists were willing to examine it, so Meister took it to a local newspaper called The Deseret News and quickly became very well-known around the country.

“I have here something that pretty much destroys the entire geological column. It has been studied by three laboratories around the world and it’s been tested and found valid. It represents a footprint that was found at Antelope Springs, Utah while digging for trilobites.

The man was digging for trilobites, and these are trilobites here and here embedded. This is a brick mold of a trilobite footprint of a human footprint with a trilobite in it. The man stepped on a living trilobite, [thus burying] him in the mud.

These particular strata are dated Cambrian, supposedly 500 million years extinct before man arrived on the face of the earth. The interesting thing about this photograph is that there is also heel marks, which would indicate that they were made by modern man.”

In a news conference, the skeptical curator of the Museum of Earth Science at the University of Utah, James Madsen, dismissively said: “There were no men 600 million years ago. Neither were there monkeys or bears or ground sloths to make pseudo-human tracks. What man-thing could possibly have been walking about on this planet before vertebrates even evolved?”

Another astonishing trilobite fossil discovery was made in Antelope Spring, Arizona on July 20, 1968, by Dr. Clifford Burdick, a consulting geologist from Tucson, Arizona. He found an impression of a child’s foot in a bed of shale.

‘The impression was about six inches in length, with the toes spreading as if the child had never yet worn shoes, which compress the toes. There does not appear to be much of an arch, and the big toe is not prominent.’

This was shown to two geologists and a paleontologist. One geologist agreed it seemed to belong to a human being, but the paleontologist’s opinion was that no biological agent had been involved. Dr.Burdick affirmed:

“The rock chanced to fracture along the front of the toes before the fossil footprint was found. On cross-section, the fabric of the rock stands out in fine laminations or bedding planes. Where the toes pressed into the soft material, the laminations were bowed downward from the horizontal, indicating a weight that had been pressed into the mud.”

Mr. Meister claimed that when he had a geologist examine the print, the geologist offered him $250,000 for the print. Meister asked him, “What are you going to do with it if I sell it to you?” The geologist replied, “I’m going to destroy it, it destroys my entire life work as a geologist.”

It’s disappointing to think that some people would be willing to destroy such a monumental artifact that can reveal such a new perspective on our human heritage and origins.

Respected archaeological researcher, Michael Cremo, has written books on the subject of such examples of ancient artifacts and he has learned that certain scientific institutions, like the Smithsonian Institution, make great efforts to maintain the concept of recent human evolution. He has documented several instances where they deny, defame, and even exile archeologists for publishing their findings for peer review.

“In defense of the dates obtained by the geologists, Virginia Steen-McIntyre wrote in a letter (March 30, 1981) to Estella Leopold, associate editor of Quaternary Research: “The problem as I see it is much bigger than Hueyatlaco. It concerns the manipulation of scientific thought through the suppression of ‘Enigmatic Data,’ data that challenges the prevailing mode of thinking.”

Can you imagine the implications of mankind around the world learning or realizing we are hundreds of millions of years older than we thought and that we have been far more advanced than even we are today? The questions and answers beyond this metaphorically opened doorway could cause a rippling paradigm shift worldwide.

During one interview, Michael Cremo said:

“The reactions in your question are typical of a group that I call the fundamentalist Darwinists. They support the theory of evolution not for purely scientific reasons, but because it confirms their prior commitments to strict materialism. They do not want to hear me, and they do not want anyone else to hear me, so they say those kinds of things. Sometimes they try to stop me from lecturing at universities.”

Those really seeking the truth are open to new information to learn from and examine the scientific findings rationally without bias. We may have to dig deep within ourselves to find the answers to the questions: Who are we? Where did we come from? Why are we here?