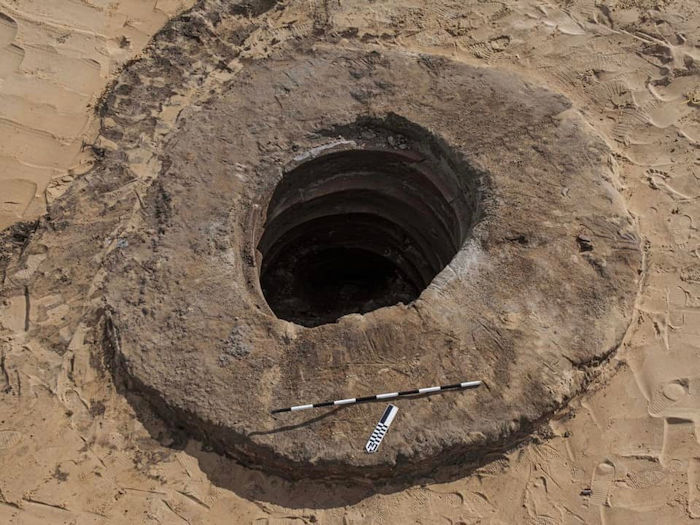 Groundwater Wells Discovered On Ways of Horus in Sinai

For the first time ever archaeologists have discovered water wells dating back to the Pharaonic times. The discovery was made by scientists who are part of the Egyptian Archaeological Mission working in the Tel-Kadwa region north of Sinai.

Dr. Mustafa and the Secretary-General of the Supreme Council of Archeology confirmed that this is the first-time water wells have been discovered in the region of the Pharaonic era.

On the walls of the Karnak Temple, there are engraving indicating such wells did exist but they have not been found, until now.

The water wells are located at the Al-Kadwa site where scientists have previously also unearthed the remains of towers of an ancient castle, as well as its southern wall, which extends for 85 meters.

The ancient building had 16 towers and was most likely a military castle. Inside the ruined rooms filled with sand, archaeologists found broken pottery.

Scientists suggested that those rooms might have been used as water banks, noting that this was a distinguishing feature of Saite architecture. It would naturally make sense water wells were placed in the vicinity.

Scientists also confirmed that the Hill Al-Kadwa is one of the most important sites of the Egyptian military architecture during the Twenty-sixth Family era (Sawi era) in the north of Sinai, where the Egyptian mission revealed the remains of two castles in the place, one of them in the era of the King Bismat First one.

It is known that the 220 km long Horus Al-Harbi Road is one of the oldest roads in Sinai and connects Egypt and Palestine. It has been known in Egyptian Pharaonic texts since the era and known by the ancient name as the “Horus Road”, after the Egyptian god Horus.

The carnage of King City I in the Temple of Karnak is the main source that indicates the existence of a series of Military castles and water wells.

According to the recent study, there is evidence the water wells were deliberately destroyed by the ancient Egyptians to prevent their use of them during the Persian invasion.

Dr. Ayman Ashmawi, head of the Egyptian archaeology sector explained that one of the Pharaonic water wells was built in an unconventional way.

It was dug in the yellow sand, and rings of pottery were placed on top of each other inside it. The diameter is approximately one meter, with three side holes that help to get down and climb out of the well.

The mission dug and descended a little more than three meters, finding 13 luxury rings, and many of the luxury pots date back to the 26th family era, the Sausage era.

Regarding the results of the mission’s excavations inside the fort, Dr. Nadia Khidr, the head of the Central Directorate for Marine Face Effects, said that she discovered a warehouse about 12m long and 4 meters wide, and in the middle, there are a number of luxury containers placed on top of each other.

The mission also found the remains of ovens, from the mid-Sawian age, which is likely to be a workshop for raw copper; where parts of the copper alloy were found in circular shapes, as well as parts of pottery blisters that were used in the in-law operations.