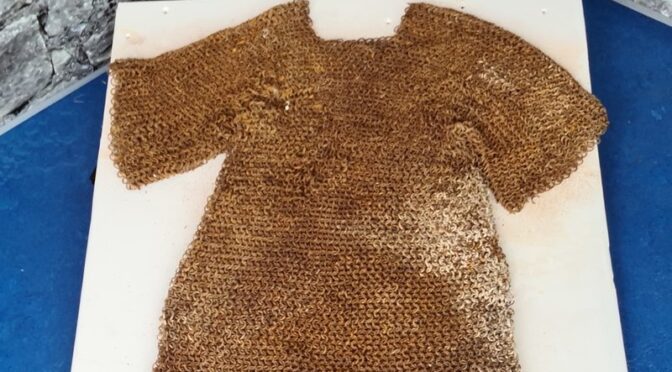 In 1169 AD, Norman invaders arrived in County Wexford, Ireland. Now, a rare and complete, 800-year-old Norman “hauberk” (chainmail vest) has been discovered in County Longford thought to date to when the Normans arrived there in 1172.

The “hauberk” was a coat of upper body armour that was often referred to as a “byrnie.” Made of chain mail, the wearable metal material was much more flexible and lightweight compared with the stiffer and heavier plate armour.

It was an almost perfectly preserved hauberk that was recently discovered in a shed at an undisclosed location in Ireland. According to a report in RTE the ancient armour is currently being held by the local tourist attraction, “ Granard Knights & Conquests,” prior to being exhibited to the public at the National Museum of Ireland.

The piece of rare, and almost complete, ancient Norman armour, that is soaked with the history of 800 years, was recently found rusting in a garden shed.

The discoverer only realized what he had in his shed after attending a ‘Norman People’ event at Granard Knights & Conquests, as part of National Heritage Week. When the finder went home and recognized the item in his shed was virtually the same as those worn by the actors earlier they came forward and informed Irish antiquary authorities.

Tourism and Education Officer for Granard Knights & Conquests, Deirdre Orme, told RTE that the hauberk is an “absolutely amazing discovery.” Furthermore, General Manager of Granard Knights & Conquests, Mr Bartle D’Arcy, explained that while the artefact was not discovered in Granard, or at Granard Motte, it was dug up from a drain nearby. Now, the National Museum of Ireland has announced that their restorers will preserve the rare piece of Norman armour.

An Origin Story As Grand As The Discovery, Perhaps?

Deirdre Orme of Granard Knights & Conquests said the team were “completely blown away” when the finder presented their team of history lovers with the 800-year-old hauberk. The reason for her excitement was because the whole scenario “completely links into what we’re doing here at the centre – tapping into our Norman history and heritage.”

The hauberk dates back to approximately 1172 AD when the Normans first arrived in Ireland. This is why the archaeologists at the National Museum of Ireland are associating the discovery with the story of Richard De Tuite, Lord Chief Justice of Ireland, who in 1199 AD built a timber-frame castle and motte.

Whether or not the armour was indeed linked with the story of Richard De Tuite, or not, Mr D’Arcy said that for the finder to have discovered the almost whole, original Norman hauberk. “is just beyond belief.” And the Norman culture specialist added that the whole discovery was amplified because it coincides with Heritage Week.

Changing The Face Of Ireland Forever

The history of Ireland is greatly composed of stories of ancient invasions. The native Fir Bolg were defeated by the Tuatha De Dannan and they themselves were banished to the mounds to exist only as faeries.

However, none of the mythological invasions was so near-genocidal as were the real-life Norman invasions. For while several waves of giants and semi-divine armies have attacked Ireland in ancient legends, none of them aimed to eradicate Irish culture so much as did the Normans, backed by forces of Rome.

According to the New World Encyclopedia, the Norman invasion of Ireland led to “the eventual entry of the Lordship of Ireland into the Angevin Empire.” This meant the Normans had the blessing of the Pope, which was a way to punish the island’s Christianity that had failed to conform to Rome’s strict rules of worship.

The immediate consequences were the end of the ancient linage of Irish High Kings and all of the timeworn ways of living and dying, and the onset of English rule in Ireland, which continued until 1922.

The Norman hauberk is an artefact from the first days of these cataclysmic changes that would entirely change the destiny of the Emerald Isle.