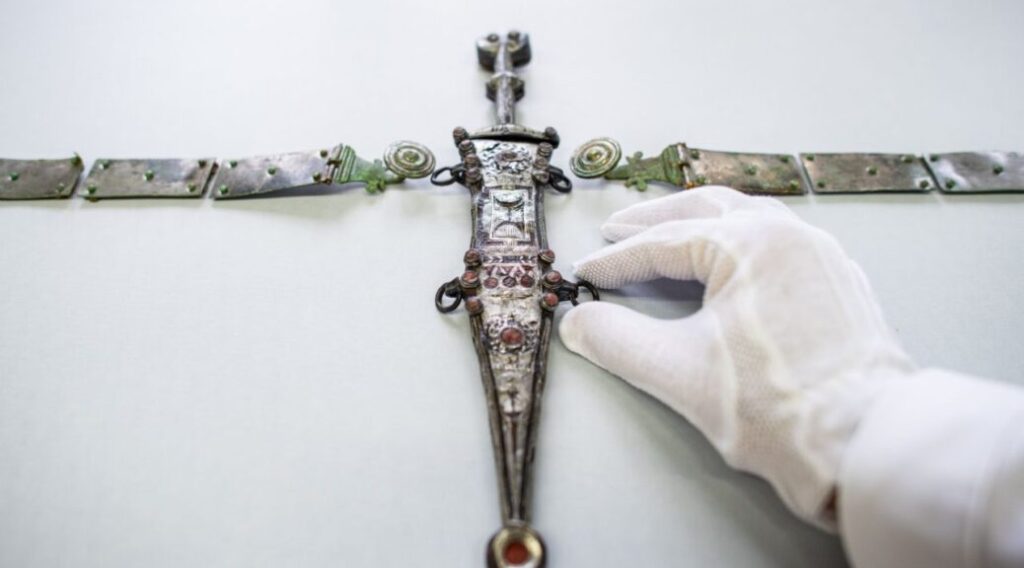 A Roman knife, 2000 years old, that a teenage boy had discovered during his work has been spectacularly restored to its former glory. The old weapon is believed to have been used in a battle against the Germanic people in the 1st century by a soldier from the Roman army.

It was found in a burial ground in Haltern am See near Munster, north-west Germany by 19 years old Nico Calman last year.

An elaborate silver Roman dagger has been painstakingly restored to its original glory after it was unearthed by a teenager on work experience in Germany.

It was believed to be the most remarkable artefact of its kind to have been discovered – at a burial ground in Haltern am See, near Münster.

It is so well preserved that red enamel and glass, as well as silver and brass, handles decorated with ornate patterns of foliage and leaves survived for 2,000 years.

The dagger is believed to have been used by a legionary fighting a Germanic tribe in the 1st century, according to The Times.

Unearthed along with the fascinating decorated dagger were bronze and brass plates, the remnants of a leather belt and a lime-wood sheath and flaxen twine.

The ornate dagger is set to be displayed in Haltern’s Roman history museum in 2022.

Michael Rind, director of archaeology at the local Westphalia-Lippe council, told The Times: ‘This combination of a completely preserved blade, sheath, and belt, together with the important information about precisely where they were found, is without parallel.’

Roman soldiers are said to have carried ornate daggers as a sign of prestige – and  Haltern was a large military camp established by troops, according to local media.

Despite archaeological excavations taking place in the German district for 200 years, this discovery is bound to shed new light on Roman activities east of the Rhine.

It was thought that the camp had been abandoned following a severe defeat as up to 20,000 men were wiped out.

In the 1990s, a new burial ground not far from the site of the battle was discovered – with several graves were discovered, including 25 skeletons in a pottery furnace.