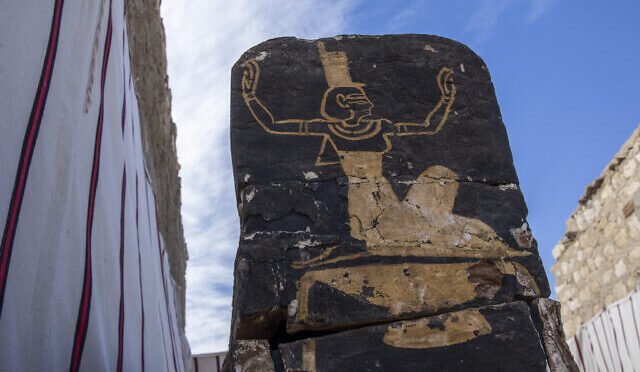 Archaeologists in Egypt have unearthed a cache of treasures—including more than 50 wooden sarcophagi, a funerary temple dedicated to an Old Kingdom queen and a 13-foot-long Book of the Dead scroll—at the Saqqara necropolis, a vast burial ground south of Cairo, according to a statement from the country’s Ministry of Tourism and Antiques.

As first reported by Al-Ahram, Egyptologist Zahi Hawass and his colleagues discovered the coffins, which appear to date back to the New Kingdom era (1570–1069 B.C.), in 52 burial shafts measuring 33 to 40 feet deep.

Paintings of ancient gods and excerpts from the Book of the Dead, which was thought to help the deceased navigate the afterlife, adorn the sarcophagi.

Hawass tells CBS News’ Ahmed Shawkat that researchers first started excavating the site, which stands next to the pyramid of King Teti, first of the Sixth Dynasty rulers of the Old Kingdom (2680–2180 B.C.), in 2010.

“[B]ut we didn’t find a name inside the pyramid to tell us who the pyramid belonged to,” he adds.

Around a month ago, the team found Naert’s name etched onto a wall in the temple and written on a felled obelisk near the entrance of the burial, per CBS News.

“I’d never heard of this queen before,” Hawass says to CBS News. “Therefore, we add an important piece to Egyptian history, about this queen.”

According to the statement, this is the first time archaeologists have unearthed 3,000-year-old coffins at Saqqara—one of Egypt’s “richest archaeological sites,” as Jo Marchant wrote for Smithsonian magazine last year. In recent months, excavations at the necropolis have yielded an array of exciting, albeit newer, finds, from sealed sarcophagi to ancient statues.

The coffins found in the burial shafts probably hold the remains of followers of a Teti-worshipping cult formed after the pharaoh’s death writes Owen Jarus for Live Science.

Experts think that the cult operated for more than 1,000 years; members would have considered it an honour to be entombed near the king.

Other highlights of the discovery include a set of wooden masks; a shrine to the god Anubis; bird-shaped artefacts; games including Senet, which was believed to offer players a glimpse into the afterlife; a bronze axe; paintings; hieroglyphic writings; and fragments of a 13-foot-long, 3-foot-wide papyrus containing Chapter 17 of the Book of the Dead.

The name of the scroll’s owner, Pwkhaef, is inscribed on the papyrus, as well as on one sarcophagus and four sculptures, according to Live Science.

These finds, notes the statement, as translated by CNN’s Amy Woodyatt, “will rewrite the history of this region, especially during the 18th and 19th dynasties of the New Kingdom, during which King Teti was worshipped, and the citizens at that time were buried around his pyramid.”