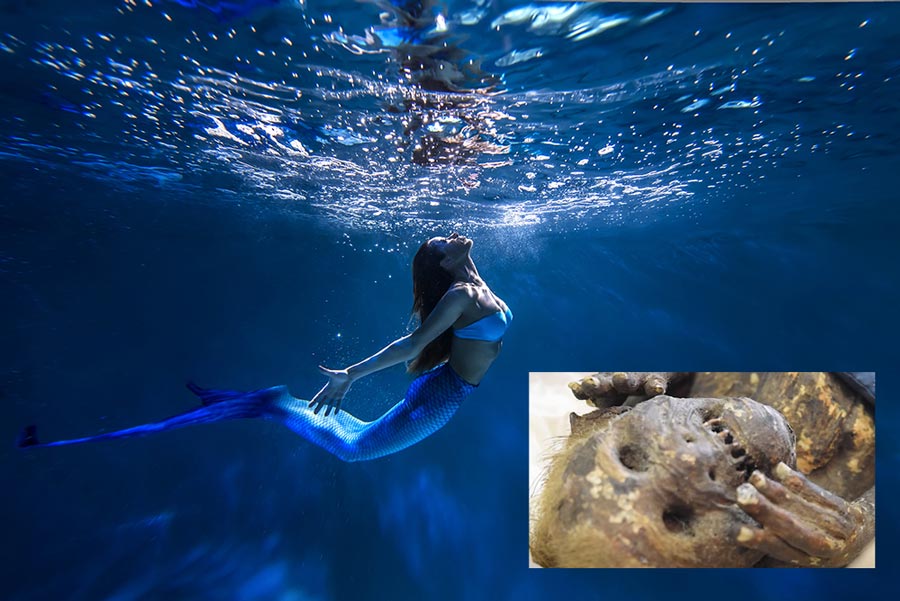 Researchers in Japan are investigating the origins of a nightmarish, 300-year-old mummified ‘mermaid’, which has been worshipped for centuries due to its supposed medicinal properties.

The haunting remains are most likely a gruesome amalgam of a monkey’s torso sewed onto a fish’s tail, potentially embellished with hair and nails from a human.

Hiroshi Kinoshita, a board member of the Okayama Folklore Society, discovered the mermaid mummy, which is around 12 inches (30.5 centimetres) long, inside a box at a temple in Okayama Prefecture. He first became aware of the mummy after he found a picture of the bizarre specimen in an encyclopedia of mythical creatures.

A fisherman supposedly caught the specimen sometime between 1736 and 1741, and he subsequently sold it to an affluent family, according to a note left inside the mummy’s box. Researchers still don’t know exactly how the mermaid ended up inside the temple, according to Japanese news site The Asahi Shimbun.

Now, Takafumi Kato, a palaeontologist at the Kurashiki University of Science and the Arts, and colleagues have begun looking into the mummy’s origins after Kinoshita convinced the temple to let the scientists investigate the unusual remains.

On Feb. 2, the scientists imaged the mummy using a CT scan, as seen in this video. Researchers will also take DNA samples to identify which species have been combined to make the mermaid. The team will release their results later in the year, they said.

The mermaid mummy somewhat resembles two mythical creatures from Japanese folklore: Amabies – mermaids with beaks instead of mouths and three distinct tail-fins – and Ningyos, which are fish-like creatures with human heads.

Both of these types of creatures have been associated with stories of miraculous health cures and increased longevity. In one famous tale, Yao Bikuni, a woman, is said to have lived for 800 years after accidentally eating an entire Ningyo, according to the UK news site Metro.

The temple’s priests look to the mummy as an omen of good health.

“We have worshipped it, hoping that it would help alleviate the coronavirus pandemic even if only slightly,” Kozen Kuida, the head priest at the temple, told The Asahi Shimbun.

The mummy was previously put on display in a glass case at the temple for visitors to pray to, but it has spent the last 40 years in a fireproof safe within the temple to prevent it from deteriorating. Similar mermaid mummies have been worshipped at two other temples in Japan, according to The Asahi Shimbun.

A similar hoax, known as the Feejee Mermaid, was sold to Dutch travellers in Japan in the 1810s and later resold to English merchants, before being shipped to the US, where it became part of the famous collection of P.T. Barnum (the real-life inspiration for the movie The Greatest Showman).

This 3-foot-long (91 cm) mermaid is believed to have been made from the body of an orangutan and the tail of a salmon.

The priests at the temple in Okayama Prefecture say they hope that the new study will add to the mummified mermaid’s legacy and help it live on through future folklore.