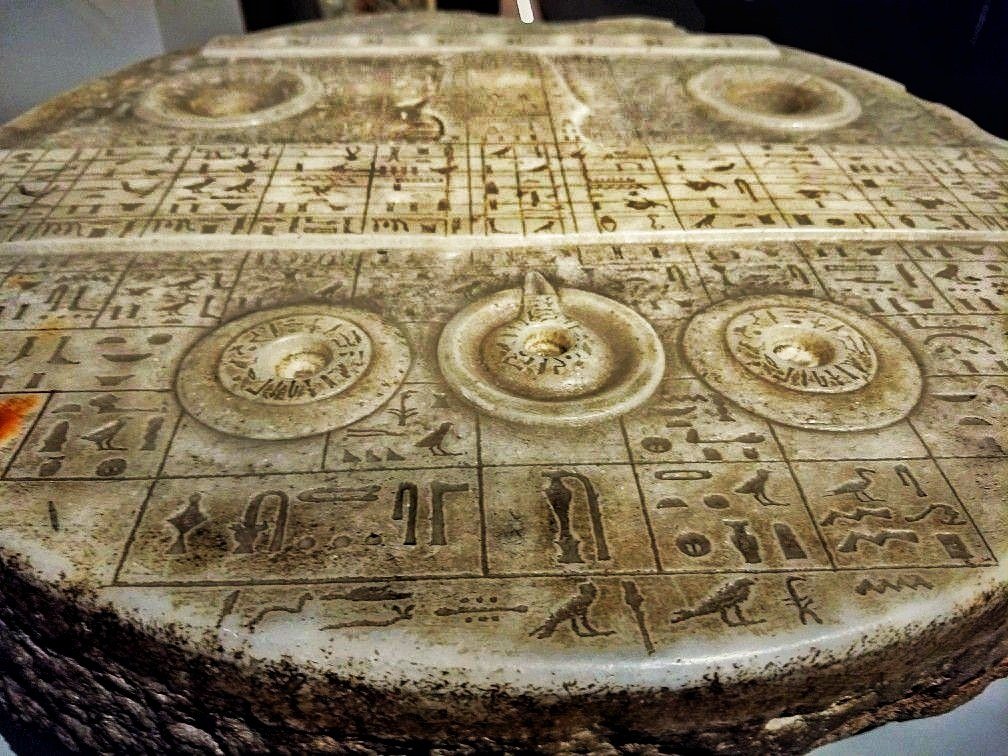 Some Egyptologists and theorists believe that this is a replica of a much earlier but far more advanced object used by Gods and Demi-Gods of Egypt.

After just a few seconds of staring at this mysterious object, we get the unmistakable feeling that it was an OOPArt artefact, which is when something literally does not belong to the time it is dated.

The enigmatic table from Ancient Egypt is about 49 cm in diameter and 13 cm in height, weighing as much as 75 kg and was meticulously moulded in alabaster, a material that only exists in this region and was frequently used for decorating various sites, including sarcophagi.

But this incredible artefact is absolutely unlike anything that was produced in this ancient time (nothing similar has been found to this day), as it features circular openings and basically undecipherable reliefs that specialists and scholars cannot interpret even after years of study.

These characteristics that we can observe, make the object resemble a control table of a modern aeroplane.

Some Egyptologists and theorists assume that this is a copy of a much older object, made of different, less weather-resistant, but considerably more advanced materials used by Gods and Demigods – perhaps a reproduction of the extraterrestrial technology observed in the past by the ancients.

This artefact was acquired by the Dutch museum in 1828, which is very interesting information about it. However, it is unknown which temple, tomb, or even where it was discovered.

As with many ancient Egyptian items, its provenance (from where it was recovered) is frequently forgotten, but its authenticity can still be confirmed. At the moment, the artefact is in the Leiden Museum of Antiquities.

Its authenticity was validated by specialists in the area after many investigations and assessments.

The strange contraption was discovered over 4,500 years ago and instantly connected with Egypt’s fifth dynasty of pharaohs. Only a small portion of its possible history can be deduced from the hieroglyphics found on its surface.

This tablet, according to one interpretation (there are others, all quite different), was used for the libation of deceased members of the highest Egyptian hierarchy in order for them to successfully enter the underworld.

Regardless of what the object is, its resemblance to modern equipment continues to perplex even the most sceptics and experts who have been unable to come up with a solid explanation for the find.