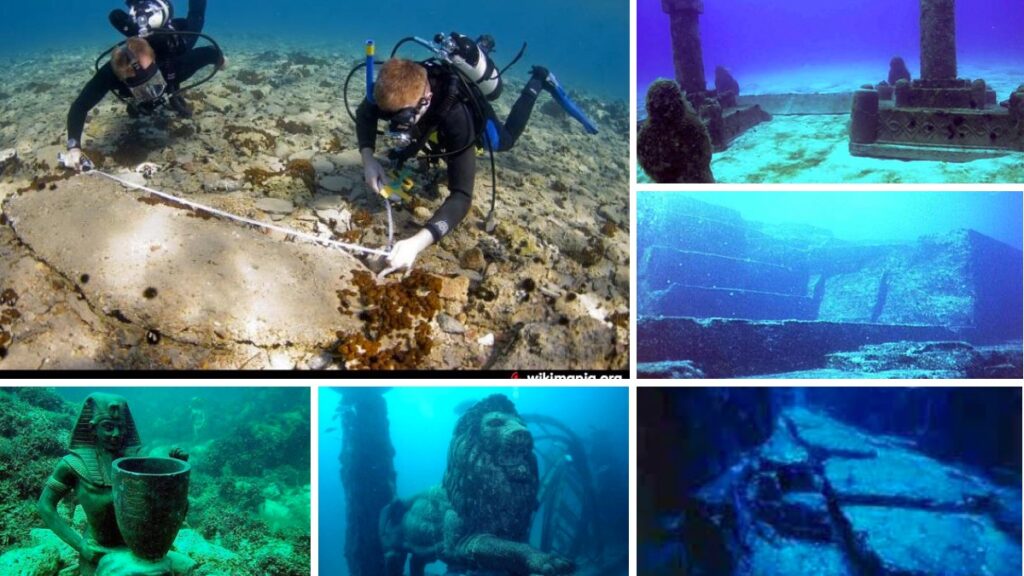 Modern study shows that Earth is approximately 4.6 billion years old and the pre-hominid primates had not appeared until the Pleistocene epoch, namely the last Ice Age, which was about 1.8 million years ago. Based on fossil studies, some scientists believe that social activities and culture did not emerge until the end of the last Ice Age.

However, the discovery of the underwater monument of Yonaguni at the bottom of the Pacific Ocean near the Japanese island caused fierce debates among experts.

At the southern tip of Yonaguni Island in the Ryukyu Islands, in 1986, divers found ruins of man-made constructions in the ocean. The site included a square-shaped structure covered with coral, a giant platform with edges and corners, as well as streets, stairways, and an arched building. While looking, one could see that the ruins resembled an altar in the ancient city.

The giant stone monolith is located off the southern coast of Yonaguni Island, about 120 kilometres east of Taiwan. Now the area of Yonaguni Island is one of the most popular places among diving enthusiasts who go there just to see the mysterious object.

Nicknamed “Japan Atlantis,” the main archaeological discovery of the 20th century was accidentally made by diver Kihachiro Aratake in 1986, when he was diving in search of a new place to observe hammerhead sharks.

He discovered a massive stone structure on the ocean floor, located at a depth of about 30 meters. The diver carefully examined the unusual object and was struck by its gigantic size.

Because the monument was mostly covered in coral, it was hard for Arataka to figure out what it was. Therefore, he swam around the huge stone steps several times and photographed them in detail, after which he returned to the shore.

The underwater monument of Yonaguni has been studied for about 20 years by Masaaki Kimura, professor of marine geology and seismology from the Faculty of Science of the University of the Ryukyus, Okinawa, Japan.

In search of an answer to the question of the origin of the unusual structure, he collected a lot of data, on the basis of which he put forward his controversial theories of the origin of the underwater pyramid. Due to Kimura’s published research, many divers have visited the site to draw their own conclusions.

Some researchers, including Kimura, believe that the monument is a man-made pyramidal structure, the remains of a disappeared ancient civilization, that got the name “Japanese Atlantis.”

Kimura is convinced that the Yonaguni monument is of artificial origin, which indicates that people lived there in ancient times. Proponents of this theory went further. They claim that the pyramid is proof of the existence of the legendary continent of Mu, which is said to sink after some cataclysm of monstrous power.

Note: At the end of the 19th century, British Colonel James Churchward was on garrison duty in India. He was fortunate enough to obtain the Naccal inscription from an abbot of a Hindu temple.

It was in a very puzzling language. After many tries, Churchward and a well-known monk deciphered the history of a great prehistoric civilization. In 1926, Churchward published a book, named “The Lost Continent” about the Mu civilization.”

During numerous underwater dives, Kimura collected evidence that confirms that the ancient underwater structure is artificial. In support of his theory, the Japanese geologist noted several specific features of the monument. He found tool marks, drainage channels, gates, stairs, two sculptures in the form of turtles, carved from stone, and the remains of a massive bas-relief with silhouettes of animals.

Kimura also claims to have found the ruins of several buildings, including several small temples, a possible arena, and the outlines of the roads that connected them all. In addition, the Japanese geologist is convinced that the topography of the island of Yonaguni testifies to the existence of a lost ancient city that disappeared under the seawater.

Kimura also believes that the ancient stone tablets are known as the “Rosetta Stones of Okinawa,” and also appear to be proof of the existence of the ancient city.

Based on the information gathered, Kimura initially concluded that the sunken city of Yonaguni was over 10,000 years old. However, he later adjusted his estimate of the object’s age to 2000–3000 years old.

Normally, sceptics question any assumptions about sunken ancient cities, and the Yonaguni monument is no exception. Geologist Robert Schoch, a professor at Boston University who dived into the Yonaguni monument, believes that the monolith is natural, although it contains elements that often lead to an opinion of artificial origin.

According to Schoch, the even, straight lines of the monolith may indicate a natural erosion process. After all, nature can create beautiful anomalies.

Schoch recalls that in Okinawa, although there are several burials of unknown age (but certainly ancient), which outwardly resemble the Yonaguni monument. They may indicate that people were simply imitating the natural forms of an underwater monolith, but this does not necessarily mean that the ruins of an ancient city are underwater.

There is also a theory that the Yonaguni monument was once the foundation of a building that was destroyed in antiquity. According to Schoch, the question of the origin of the monument can be somewhat more difficult than “artificial” or “natural formations.”

As for the age of the monument, Kimura’s original estimate of 10,000 years was met with scepticism simply because of its improbability. It is highly doubtful that ancient people had the knowledge and means to build such a structure. In any case, the design and construction of the stone platform in the past was an incredibly difficult task for any civilization.

Graham Hancock is a British writer, who is recognized worldwide for his books, such as Fingerprints of the Gods. In August 2001, he and his wife joined the Chinese and Japanese researchers to explore this area. He explained that the stones from the undersea sunken city are clearly different from natural stone structures, making them more likely to be of man-made origin.

He confidently stated: “Nature does not produce such structures, contrary to man-made structures where great attention is paid to such details.” Apparently, the stones of the Hujing undersea sunken city are positioned exactly from north to south, and from west to east. What’s more, these stones have very flat and smooth surfaces. They are so closely aligned that only a thin knife could fit in between the joints. Hancock’s opinion is that this has to be man-made and cannot be a natural product.