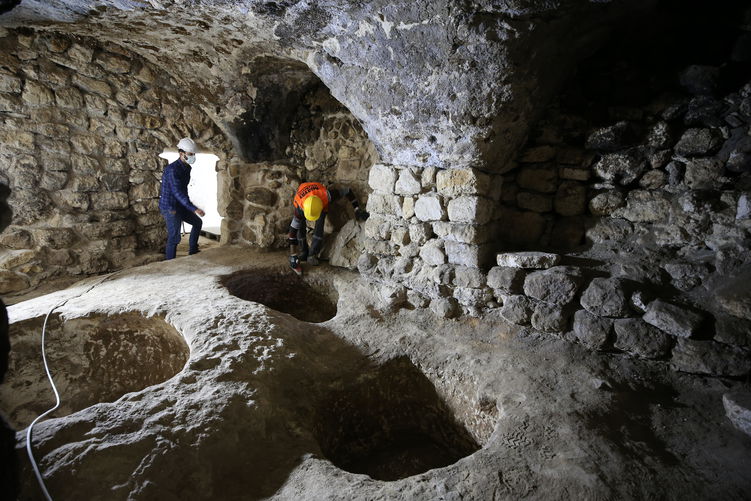 An archaeological dig in Turkey uncovers a massive underground city

In an underground city known used as a settlement in the early Christian era, in the Midyat district of Mardin, a large number of artefacts from the 2nd and 3rd centuries were unearthed.

Midyat is approximately 1.5 hours away from Mardin. Midyat were, rock mansions, gates with arches, Süryani churches with minaret-like ascending gong towers, is reminding a Medieval city.

In the district, a cave was found within the scope of a project started two years ago for cleaning and conservation of the historical streets and houses. After it was determined that the cave is a passage to different places with corridors, excavation works were launched to unearth the underground city.

Older residents of the area knew about the city but did not know its importance. The underground city covers a large part of the district and is so big archaeologists were not able to uncover all parts of the city.

Historians state in historical sources that Midyat got its name from the word ‘Matiate’ meaning ‘City of Caves’ and that the name ‘Matiate’ was mentioned in Assyrian inscriptions in the 9th century BC.  Probably Midyat’s name is coming from this.

During these excavations, sustained with the cooperation of the Ministry of Culture and Tourism, General Directorate of Cultural Heritage and Museums, Mardin Museum, and Midyat Municipality, places of worship, silos, water wells, and passages with corridors have been unearthed in the underground city.

Experts also found many artefacts dating back to the 2 and 3 centuries A.D. in various parts of the city.

Gani Tarkan, director of Mardin Museum and head of excavations at Matiate, said that their work will spread to the whole district. Stating that similar examples of underground cities have been found in Anatolia but that Midyat’s underground city has very different characteristics, Tarkan continued: “Matiate has been used uninterruptedly for 1,900 years.

It was first built as a hiding place or escape area. As it is known, Christianity was not an official religion in the second century.

Possibly, the underground city of Midyat was one of the living spaces built for this purpose. It is an area where we estimate that at least 60-70,000 people lived underground.”

The underground city of Midyat is still largely unexplored, but initial studies suggest its size and features may rival those of Derinkuyu, the largest excavated underground city in Cappadocia, which could house 20,000 people.

Similar examples of underground cities are found in Anatolia, but Midyat has a very different feature from these. As head of excavations at Matiate Gani Tarkan stated:

“Underneath is a different history, a different period, and above it is a different date. While the houses on the top are dated to the 17th, 18th, and 19th centuries, there is a completely different city underneath. That city is 1900 years old,” he added.

It is expected that the number of visitors to the district will significantly increase with the complete unearthing of the underground city.