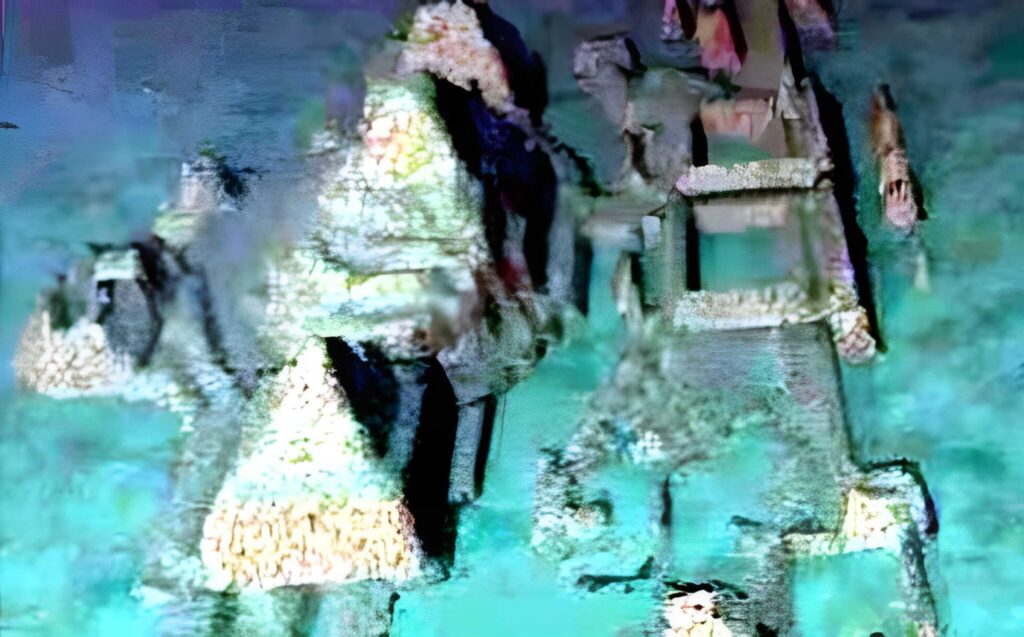 Mystery Of Pyramids Submerged On Cuba Coast More Than 50,000 Years Ago

In 2001, a Cuban-Canadian research team discovered what could be the ruins of an ancient city that sank more than 50,000 years ago between Yucatan and the western coast of Cuba. The team worked on the “Project Exploramar,” which discovered the well-preserved USS Maine, three miles off the Cuban coast at 1150 m depth in 2000.

On December 7, 2001, BBC News announced the discovery of an ancient sunken city with unusual features off the coast of the Guanahacabibes peninsula in the Pinar del Río province of Cuba. It was found using an underwater robot equipped with cameras, lights, and sonars at more than 2,000 feet (650 meters) below the sea’s surface covering an area of 2 square kilometres (200 hectares).

The discovery was reported by Canadian Marine Engineer Paulina Zelitsky along with her husband Paul Weinzweig. She stumbled upon the fantastic geometric patterns which she found 2000 feet underwater while studying the grainy, black and white sonar images on her computer screen, searching for a scientific explanation.

Paulina Zelitsky was born in Poland and studied engineering in the former Soviet Union. During the Cold War, she worked on a submarine base in Cuba but defected to Canada, where she married Paul Weinzweig and together, they set up a company called Advanced Digital Communications (ADC).

The expedition that resulted in the discovery of megalithic structures off the coast of Cuba was a joint venture between ADC, the National Geographic Society, and the Centre for Marine Archaeology and Anthropology at the Cuban Academy of Sciences in Cuba. The Cuban government-employed Zelitsky & her team to assist in the location of a sunken treasure that is believed to lie off the coast in a variety of vessels.

The structures, located at a depth of approximately 650 meters, seemed to have an urban pattern and generated significant headlines such as “The Discovery of Atlantis in Cuba.” ADA mapped the ocean floor surrounding Cuba for three years under contract with the Cuban government. Using their 265-foot ship, Ulises, they found about 20 shipwrecks, including the USS Maine, and vast oil fields in deep waters around the island.

“The structures we found on the side-scan sonar simply are not explicable from a geological point of view. There is too much organization. too much symmetry, too much repetition of form,” Weinzweig said.

According to Zelitsky, the research vessel Ulises sailed in the Yucatan Channel just off the west coast of Cuba that day, hired by the Castro government to look for undersea oil and gas, as well as old treasure ships if they could be found.

As Zelitsky and Weinzweig were watching the screen, the empty plain of sea bed suddenly gave way to images of massive geometric shapes, apparently cut from stone. As more shapes came into view, some appeared to be arranged in patterns over a large area of about 20 square kilometres.

Some stones seemed to be cut into blocks, and some blocks looked perfectly aligned. They appeared to form corridors and the outlines of rooms, the two scientists said. There were round stones and pyramid-shaped ones, too.

“The sea bottom in that area is an undulating sandplain. What they were seeing should not have been there. We were shocked, and frankly, we were a little frightened. It was as though we should not be seeing what we were seeing. Our first thought was maybe we found some kind of secret military installation,” said Zelitsky.

“Nothing is known for certain now,” Weinzweig noted, “but the oral tradition in early Mexico speaks of an advanced civilization of tall white people who came from the East, and of an island that sank in a great natural disaster.” In the ancient language of some early Central American Indians, he said, “the word Atlantic means ‘our good father,’ or, ‘the place where our good father rests.’”

What if the intriguing shapes found by the sonar are just carved over the centuries by whimsical nature? Zelitsky and Weinzweig did not think so. Besides, she added that they believed it to be the remnants of a city that had been built by locals upon a land bridge connecting Cuba to the mainland at some point, although such a bridge is not known to have ever existed.

“There is no granite in Cuba or the Yucatan. That area features limestone,” Zelitsky said. Granite is found in Central Mexico, and was used by ancient people such as the Maya and an older civilization, the Olmec, in their construction of cities and buildings.

This site, perhaps built by a culture that far pre-dates the famous Maya of the Yucatan Peninsula, might have been the victim of a vast, mysterious cataclysm that somehow dropped it 2,000 feet beneath the surface of the sea. The Maya developed a magnificent civilization on the Yucatan Peninsula beginning about A.D. 250 and peaking about A.D. 900. Spain finally completed its conquest of the Maya in about 1500.

The Maya produced advanced architecture, paintings, pottery, and sculpture, and their grasp of mathematics and astronomy was remarkable for that time. They might have developed the first calendar and were among the first to make paper and books of tree bark. They cut large stone blocks and made buildings, courtyards, and pyramids, many for the worship of numerous gods.

But Zelitsky thought the Mega site pre-dates even the ancient Maya by a lot.

Then other voices arose that expressed their opinion about the discovery, such as Archaeologist Keith Fitzpatrick-Matthews of Bad Archeology. According to him, during the ice age, the city would never have been above sea level unless the place it was built on had sunk first.

“However, if we take Plato at his word – as we must if we assume Atlantis to have been a historical place – the violence of its sinking makes it improbable that an entire city could have survived plunging more than 600 m into an abyss. Rapid sinking would devastate structures; the persistence of mud just below the surface suggests that the sinking was not to a depth of 600-740 m. Unless we are prepared to jettison Plato’s text – the sole source for the story of Atlantis – we cannot identify the features found by Paulina Zelitsky with Atlantis,” he explained.

A similar discovery was made off the coast of Yonaguni Island in Japan in 1986. The find was known as the “Yonaguni Monument,” an artificial rock formation submerged in prehistory. There, strange megaliths up to 5 stories high were found.

Are the Cuba underwater ruins really the sunken underwater city? Could it be another evidence of the lost mystical Atlantis? Unfortunately, there is simply not enough imagery data, and the ruins might be anything. Interestingly, there seems to have been no real follow-up expedition to the site, which some have seen as rather suspicious and conspiratorial.