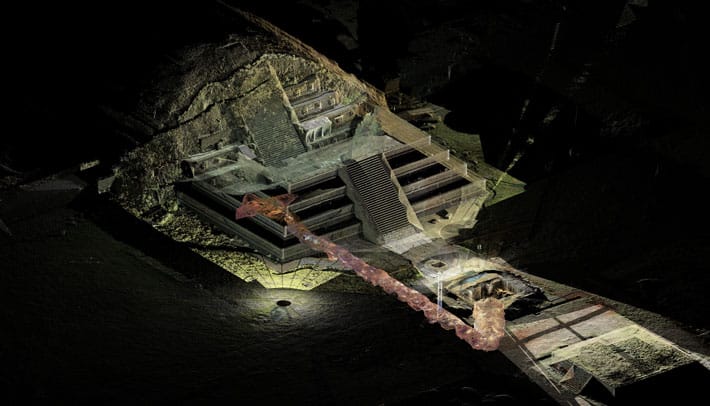 In 2015, a team of archaeologists discovered a large quantity of liquid mercury beneath the Mexican pyramid. There are several occasions where mercury is found in the form of a powdery red pigment called cinnabar in the Mesoamericans’ tombs, but finding it in liquid form is extremely rare. Ancient astronaut theorists suggested that the presence of liquid mercury might have been a part of the propulsion system used by the Aztecs.

The traces of liquid mercury were discovered by a Mexican archaeologist named Sergio Gómez in three chambers situated under the Pyramid of the Feathered Serpent at the Teotihuacan archaeological site, north of Mexico City. Gómez had excavated the tunnel at the site unsealed in 2003 after 1,800 years, and his team discovered three chambers. They also found strange artefacts near the tunnel’s entrance such as jade figurines, seashells, jaguar remains, and a box filled with carved shells and rubber balls.

Gómez believed that the discovery of liquid mercury could be a representation of the underworld where the dead resided, probably the remains of the kings of Teotihuacan.

The Aztecs called the ancient site of Teotihuacan a “City of the Gods.” It is located about 50 km northeast of modern-day Mexico City. There is no record of when the city was built, but it flourished as early as 400 BC and became the most powerful and influential place by 400 AD.

It is estimated that around 100,000 to 200,000 people lived in Teotihuacan, who built giant monuments such as the Temple of Feathered Serpent (Quetzalcoatl) and the Pyramids of the Sun and the Sun Moon.

An anthropologist at the University of California named Rosemary Joyce said the Mesoamericans used cinnabar to create liquid mercury to decorate jade objects and apply it to the dead bodies of their royal members. There are three other sites in Central America where mercury was found, but not at such a large scale beneath the Temple of the Feathered Serpent.

The many structures that still stand in Teotihuacan appear to be encoded with advanced mathematical and cosmic principles, and the layout precisely mirrors the positions of the planets in our solar system. Modern excavations at the site have unearthed discoveries of liquid mercury, walls lined with mica, and strange golden spheres containing unknown substances–all of which are out of place in the ancient world. Could these artefacts be the remnants of an alien society? Perhaps even an extraterrestrial spaceport?

Mercury is a very toxic element that humans can expose to in several ways. Its exposure can cause headaches, chills, fever, chest tightness, coughs, hand tremors, nausea, vomiting, abdominal cramps, diarrhoea, etc. Although scientists are puzzled about what had been discovered under the Aztec pyramid, ancient astronaut theorists believe the mercury found at the Quetzalcoatl temple may have a direct connection with the feathered serpent god that came down from the sky.

In Episode 4 of Season 11 of Ancient Aliens, theorists discussed the possible reason behind the availability of liquid mercury on the large scale beneath the ancient Mexican pyramid.

Swiss author Erich von Däniken said: “The liquid mercury was not only found in Teotihuacan, according to old Indian texts, but it was also once part of the propulsion system which extraterrestrials used for their flying machines.”

There are references in ancient Vedic texts that cite Vimanas that could fly in air, water, and land. They mention various propulsion including Mercury propulsion. Many legends say the Nazis went through these ancient Sanskrit texts to build their flying machine.

“The future spacecraft engine planned by NASA uses mercury bombardment units powered by solar cells. The mercury propellant is vaporized, fed into the thruster discharge chamber, ionized, converted into plasma, and accelerated through small openings to pass out of the engine at velocities between 1200 to 3000 kilometres per minute. But, so far NASA is successful with only one pound of thrust which is inadequate. But 108 years ago, S.B.Talpade, a Sanskrit scholar of Bombay was able to use the knowledge of Vaimanika Shastra to produce sufficient thrust to lift his aircraft 1500 feet into the air.”

Giorgio Tsoukalos suggested the mercury in a chamber of a feathered serpent pyramid might depict the presence of physical craft there at some point. He added what if the feathered serpent was actually a spacecraft.

A similar case of mercury can be found in the Shaanxi province of China where there is a funerary of 8,000 life-sized Terra-Cotta Warriors and Horses. Researchers could not scale the massive underground structures due to high levels of mercury writings from the time of Qin Shi Huang. Like the Aztec story of Quetzalcoatl coming down from the sky, the Chinese have a legend of the ancestor of Qin Shi Huang, the Yellow Emperor descended from heaven on a dragon. It is believed that the dragon was a spacecraft that could cover vast distances in a short time period.

According to an ancient astronaut theory, the Aztecs and the Chinese received hidden secrets of mercury that allow them to create a mercury river for the extraterrestrials or their gods.