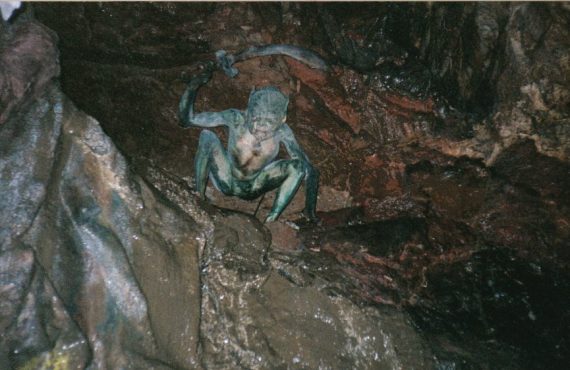 A few days ago I got into a debate about the theories of the late Mac Tonnies, well known for his books, After the Martian Apocalypse and The Cryptoterrestrials. It’s the latter book (and the relevant data and theories) that I’m focusing on today. I have to say that Tonnies’ The Cryptoterrestrials makes a very good, solid case with regard to his ideas and concepts. If you don’t know them, it basically like this: the UFO phenomenon has nothing to do with extraterrestrials, but everything to do with an ancient, advanced, human society that has lived here in stealth for possibly tens of thousands of years.

Maybe, even longer. And, as Mac saw it, the Cryptoterrestrials present themselves as aliens from other worlds (or even from other solar systems) so we don’t discover their true origins.

Mac was a great writer and he presented his overall story in a fashion that definitely makes food for thought. And, as I see it, many of his theories stand up.

For example, he suggested the reason why the 1950s-era “Space Brothers” were so concerned about our nuclear weapons was that they were really from Earth, and not from another world, at all. In other words, if we destroyed ourselves, then the Space Brothers – really home-grown, ancient humanoids and not ETs – would be destroyed in the radioactive inferno, too.

Tonnies also focused on the matter of the black-eyed Greys of today and how the Cryptoterrestrials might be using our DNA, cells, eggs, sperm, and so on, to try and save their waning civilization – a civilization that really has its origins on Earth. In addition, he looked at the matter of the Cryptoterrestrials – carefully, stealthily and even in a creepy and sinister fashion – infiltrating our society and our cities. Let’s see a few of Mac’s own words that he made to me before his death. In terms of his theorizing, Tonnies said: “After devouring countless books on the UFO controversy and the paranormal, I began to acknowledge that the extraterrestrial hypothesis suffered some tantalizing flaws.

In short, the ‘aliens’ seemed more like surreal caricatures of ourselves than beings possessing the god-like technology one might plausibly expect from interstellar visitors. Like [UFO researcher] Jacques Vallee, I came to the realization that the extraterrestrial hypothesis isn’t strange enough to encompass the entirety of occupant cases. But if we’re dealing with humanoid beings that evolved here on earth, some of the problems vanish.”

Mac had more to think on: “I envision the Cryptoterrestrials engaged in a process of subterfuge, bending our belief systems to their own ends. And I suggest that this has been occurring, in one form or another, for an extraordinarily long time.

I think there’s a good deal of folkloric and mythological evidence pointing in this direction, and I find it most interesting that so many descriptions of ostensible ‘aliens’ seem to reflect staged events designed to misdirect witnesses and muddle their perceptions. I regard the alleged ‘hybridization program’ with scepticism.

How sure are we that these interlopers are extraterrestrial? It seems more sensible to assume that the so-called aliens are human, at least in some respects.

Indeed, descriptions of intercourse with aliens fly in the face of exobiological thought. If the crypto terrestrials population is genetically impoverished, as I assume it is, then it might rely on a harvest of human genes to augment its dwindling gene pool.

It would be more advantageous to have us believe we’re dealing with omnipotent extraterrestrials, rather than a fallible sister species. The ET-UFO mythos may be due, in part, to a long-running and most successful disinformation campaign.”

As I see it, Mac worked out his theory pretty good (and granted, yes, it was just a theory). There is one part of the story, however, that I can’t buy into – or, at least, not to a 100 per cent degree. Here’s why: one of the things Mac suggested was that the Cryptotererstrials were only seen now and then  (and that went for their craft, too) because for most of the time they lived underground. This is where my doubts come in. Of course, for centuries tales of strange entities among us can be placed in that category – and living below the surface of our world – abound. Fairies, “the little people,” Richard Shaver, the “Dulce Base” controversy, and more. Is it feasible that an entire ancient civilization would be able to hide underground? And, even more importantly, what about not being seen coming in and out of huge entry and exit places – and maybe on every continent? That’s where I feel Mac stretched things to a degree – may be a significant degree. I can see aliens stealthily entering our solar system – and our atmosphere, too – and not being seen. But, ship after ship soaring out of large tunnels that clearly no one has ever found? If someone showed me some kind of proof of massive, high-tech, underground worldwide caverns, caves and underground bases I wouldn’t just be impressed. I would be beyond impressed.

In short: if the Cryptoterrestrials (and their craft) are from the Earth’s underground, then they surely would be seen like a missile exiting a military missile silo – here, there and everywhere and 24/7, too. But, that’s not what we’re seeing. Yes, we see UFOs all the time. Do we see them coming out of the ground over and over again? Nope. And that’s a key issue. I like Mac’s theory of an ancient humanoid race – one that looks somewhat like us and that is infiltrating us. But, the underground aspect? No.