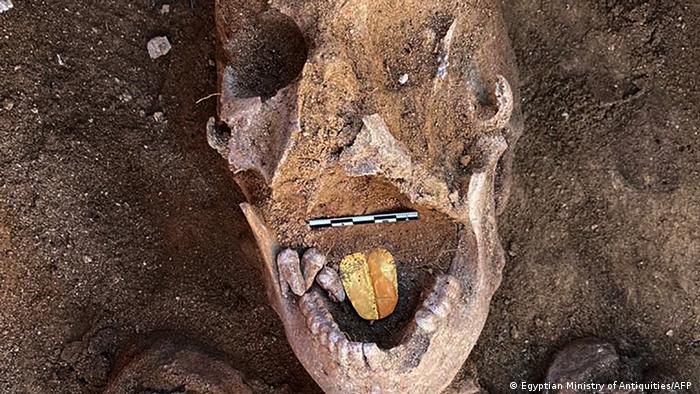 The golden amulets were placed in the mouths of the dead “to ensure they could speak in the afterlife,” according to the Egyptian Ministry of Antiquities. The search for Cleopatra, however, continues.

“The mission discovered 16 tombs cut into the rock… in the temple of Taposiris Magna, west of Alexandria,” the Egyptian Ministry of Antiquities said in a statement reported by AFP. The authority said this burial technique was commonplace during both the Greek and Roman periods.

King of ancient Greece Alexander the Great conquered Egypt in 332 B.C.. After Alexander’s death, control passed to the Greek Ptolemy dynasty but in 30 B.C. they succumbed to the Romans, who ruled for more than six centuries.

The tombs contained several mummies that were “poorly preserved” but bore “gold-leafed amulets in the shape of a tongue,” the ministry’s statement said. The amulets were placed in the mouths of the deceased “to ensure they could speak in the afterlife” to Osiris, the Egyptian god of death and the underworld.

One had “bandages and parts of cardboard — layers of glued, stuccoed and painted linen fabric that enveloped the mummy — decorated with gilding with the effigy of Osiris.”

The second mummy of interest contained a “crown decorated with horns and a cobra… as well as a necklace with a pendant in the form of a falcon’s head”, representing the god Horus, the son of Isis and Osiris, according to the team’s statement.

The mission has been working to the west of Alexandria for a number of years, looking for the tomb of the legendary Queen Cleopatra.

Doubts remain, though, among archaeological circles about the likelihood of finding her remains there. Despite considerable primary source material documenting Cleopatra’s death, burial and final days, there is rather less pointing to a possible location.

Cleopatra was the last sovereign to rule Egypt as part of the final pharaonic dynasty before the country fell to the Romans.

According to Roman-era historians Suetius and Plutarch she was buried together with the ashes of Mark Anthony — with special permission from Emperor Augustus (or Octavian as he was known at the time), who had defeated their forces and secured control of Rome after years of conflict.