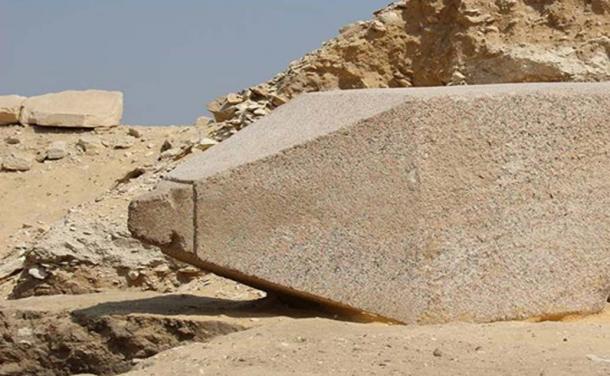 The peak of a pyramid, dating back to around 2,000 BC, has been unearthed at the long-lost burial site of Ankhnespepy II, an important Egyptian queen of the 6 th dynasty.  The rest of the pyramid is yet to be discovered.

Egypt’s Ministry of Antiquities announced that the top of the pyramid, known as a pyramidion, was discovered at the funerary complex of Queen Ankhnespepy II at Saqqara necropolis, located about 30km (19mi) south of Cairo.

Dr. Mostafa Waziri, Secretary-General of the Supreme Council of Antiquities, states that the pyramidion is made of granite and measures 1.3m high and 1.1m long on its sides. Features of the pyramidion reveal that it had once been covered in either gold or copper.

The pyramid peak was unearthed close to where part of an obelisk for the same queen was discovered just last week.

The ancient monument, which also once had a top covered with copper or golden foil to shine in the sunlight, contains inscriptions that name Queen Ankhnespepy II, suggesting it had been built in her honour.

The upper part of the fragment that has been unearthed is 2.5 meters long, making it the largest fragment of an obelisk from the Old Kingdom yet discovered.

“We can estimate that the full size of the obelisk was around five metres when it was intact,” said Collombert.

When Merenre died, her own son with the King, Pepy II, inherited the throne at the age of 6 and Queen Ankhnespepy II became his regent, the effective ruler of the country.

Ankhnespepy II’s burial chamber was discovered in 1963, along with the remains of a middle-aged woman inside a sarcophagus, which may well belong to the queen. In 1998, her pyramid was found and excavated and contained the first known examples of the pyramid texts in a Queen’s pyramid.

The texts refer to her as a queen mother, hence the construction of her pyramid dates to the reign of her son. Now, adding to the string of discoveries is the obelisk built in her honour and the pyramidion of a satellite pyramid.

Archaeologists are hoping that they may next uncover the bottom half of the obelisk and the rest of the satellite pyramid.