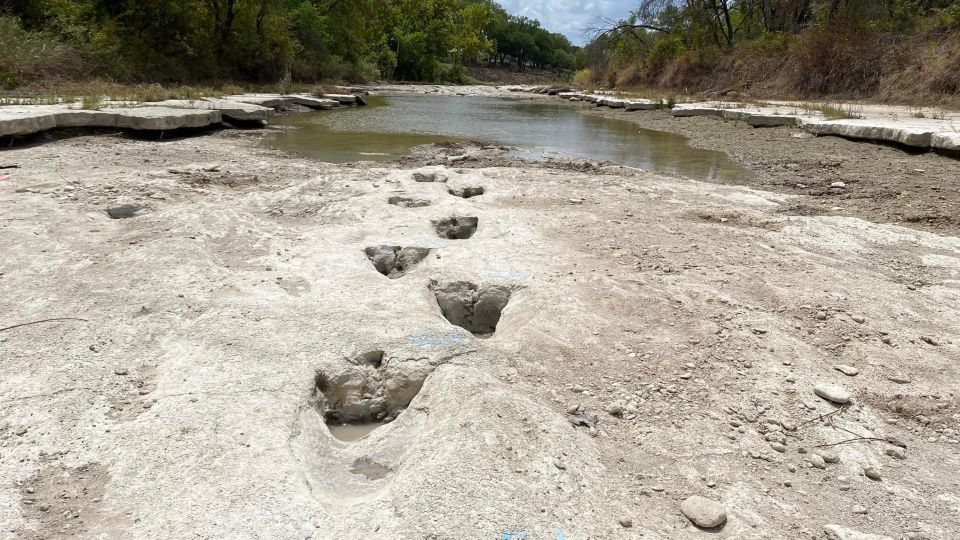 This summer, devastating droughts have revealed dead bodies and sunken Nazi ships, but it hasn’t been all macabre: a set of dinosaur tracks have recently been discovered due to the receding waters at the Dinosaur Valley State Park in Texas.

Once covered by mud, silt, and shallow water, the giant footprints were recently revealed following a drought that has been drying up the Paluxy River, according to a video released by the Friends of Dinosaur Valley State Park.

With each footprint featuring three deeply embedded claw marks, it’s believed the tracks were made by a theropod. These are a diverse clade of bipedal dinosaurs that included Tyrannosaurus rex and Allosaurus.

These new tracks, however, were most likely stomped into the ground by an Acrocanthosaurus, an enormous carnivore that lived in what is now North America some 113 to 110 million years ago.

This genus of dinosaur could grow up to 11 meters (36 feet) in length, and this enormous size can be seen in their footprints, easily over 30 centimetres (one foot) from heel to claw.

The Dinosaur Valley State Park was like a prehistoric highway in the early Cretaceous Period. Found near the present-day Texan city of Glen Rose, the area features five main track sites featuring the footprints of both theropods and sauropods, the four-legged fellas whose members are known for their long noodle necks.

The tracks were first discovered in 1909 following a massive flood on the Paluxy River that exposed the fossilized prints. Initially, palaeontologists only noticed the three-toed theropod prints, but it eventually became apparent that the site was also home to sauropod footprints – the first distinct sauropod tracks ever found in the world.

Over the past century, researchers have managed to discover and document many of these footprints here, but the tracks are only occasionally visible depending on the river’s water levels.

Given the achily dry weather in Texas at the moment, even more of the prints have been revealed along the riverbed than usual.

This summer has a severe lack of rain and records high temperatures in Texas. Around 27 per cent of the state is reportedly under an “exceptional drought” warning, the most severe category, while a further 62 per cent is enduring an “extreme drought.”

Downpours of rain have started to hit the state this week. While rain might seem welcome, the dry past few months’ weathers has left much of the land parched and unable to absorb water, bringing with it the danger of flash flooding.

Whether these remarkably preserved tracks will be seen again after the deluge remains unknown for now.