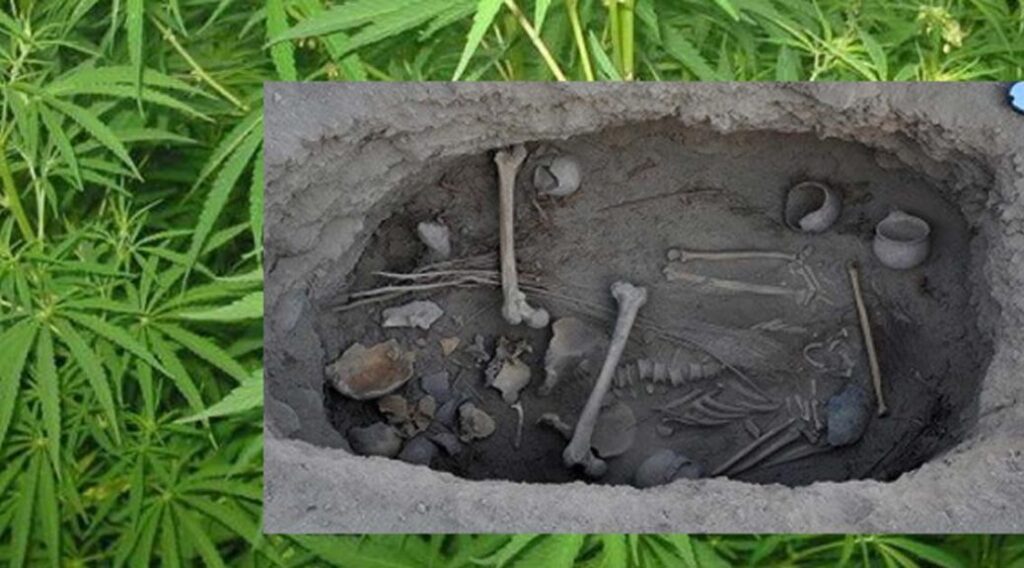 Archaeologists Are Surprised to Find a 2,500-Year-Old Cannabis Burial Shroud Found in China

Thirteen cannabis plants were found covering the body of a man who was buried in Turpan, China, around 2,500 years ago. This is the first time archaeologists have discovered a quantity of well-preserved cannabis plants and it provides information on how the plant was used in ancient Eurasian cultures.

National Geographic reports that the plants were placed across the 35-year-old man’s chest with their roots below his pelvis and the tops of the plants reaching up past his chin to the left side of his face – as if they were a shroud. Each plant measures about 3 feet (0.91 meters) long.

A previous example of cannabis found in a burial comes from nearby Yanghai cemetery – where the herb was discovered nearly a decade ago . That grave contained almost two pounds of cannabis seeds and powdered leaves.

Regarding the Altai Mountains region , another grave which was found to contain cannabis belonged to the famous Siberian Ice Maiden, who is also known as the Princess of Ukok and the Altai Princess of Ochi-Bala.

This burial has been dated back about 2,500 years and was found in 1993 in a kurgan (mound) of the Pazyryk culture in the Republic of Altai, Russia. It has been suggested that the cannabis found near the mummified woman’s remains may have been used to help her cope with breast cancer.

But what makes the recently discovered cannabis shroud unique is that it provides the first example of complete cannabis plants found in the archaeological record. This is also the first time that the plant has been found acting as a burial shroud.

According to China Topix , the man with the cannabis shroud was found placed on a wooden bed with a reed pillow beneath his head. He is said to have Caucasian features and his grave is one of 240 burials which were excavated at the Jiayi cemetery of Turpan.

Radiometric dating of the tomb and the archeobotanical remains within it shows an age of about 2800–2400 years old. At that time, the area was occupied by the Gushi Kingdom and the desert oasis was an important location on the Silk Road .

With the importance of the site on the trade route, Hongen Jiang and the rest of the team of researchers wondered if the plant was locally-sourced or came from another location.

National Geographic reports that the fact that the plants were found flat on the man’s body led the archaeologists to decide they were fresh when they were placed in his grave – and therefore were local.

Moreover, a few of the plants had flowering heads which were nearly ripe and had immature fruit. This allowed the researchers to conclude that the man was buried in late summer.

The flowering heads of the cannabis plants also provided inspiration for the researchers in deciding the common purpose of plant in the region at the time of the man’s burial.

It is believed that there were three general uses for the cannabis plant in that location during that time period: as a psychoactive substance, for textiles via hemp fibers, and as a food source with its seeds.

However, as Jiang noted to National Geographic, “no hemp textiles have been found in Turpan burials, and the seeds of the plants in the Jiayi burial are too small to serve as a practical food source.”

The flowering heads that were found on the plants were, however, covered with glandular trichomes that secrete resin containing psychoactive cannabinoids such as THC – supporting the psychoactive substance hypothesis.

Thus, the researchers concluded that the plant was “grown and harvested for its psychoactive resin, which may have been inhaled as a sort of incense or consumed in a beverage for ritual or medicinal purposes.”

In another recent discovery regarding ancient cannabis, it was found that the nomad tribe known as the Yamnaya may have facilitated the first transcontinental trade of the plant.

As Natalia Klimczak wrote “the herb was not first used and domesticated somewhere in China or Central Asia. Rather, it was used in Europe and East Asia at the same time – between 11,500 and 10,200 years ago.”

The tribe of Yamnaya nomads came from the eastern Steppe region, which is nowadays Russia and Ukraine, and entered Europe about 5,000 years ago. And, as Klimczak notes “Carbonized achenes and signs of cannabis burning were discovered at archeological sites which suggests that the Yamnaya brought the practice of cannabis smoking with them as they spread across Eurasia.”

The trade route created by Yamnaya and their neighbors became a part of the Silk Road several millennia later. The researchers in that study suggested that “the fact that cannabis had multiple uses made it an ideal candidate for being a “cash crop before cash.””