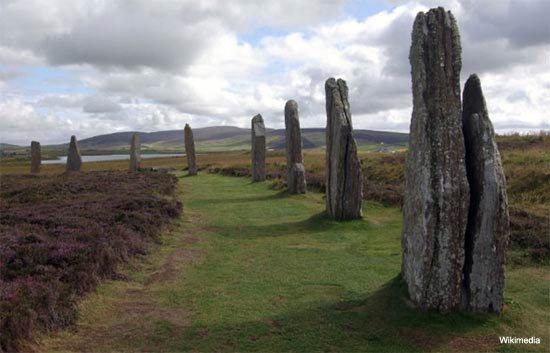 In 2014, a groundbreaking excavation of a prehistoric temple complex on the Scottish island of Orkney revealed that the Neolithic inhabitants of the island were far more advanced than initially realised.

As well as a large collection of ancient artifacts that reflect a complex and culturally-rich society, archaeologists also discovered that the three major monumental structures on the island – the Ring of Brodgar, the Stones of Stennes, and the Maes Howe tomb – were “inextricably linked in some grand theme”.

The archaeological site, known as the Ness of Brodgar, covers an area of over 6 acres and consists of the remains of housing, remnants of slate roofs, paved walkways, coloured facades, decorated stone slabs, a massive stone wall with foundations, and a large building described as a Neolithic ‘cathedra’ or ‘palace’, inhabited from at least 3,500 BC to the close of the Neolithic period more than a millennium and a half later.

“Their workmanship was impeccable. The imposing walls they built would have done credit to the Roman centurions who, some 30 centuries later, would erect Hadrian’s Wall in another part of Britain.

Cloistered within those walls were dozens of buildings, among them one of the largest roofed structures built in prehistoric northern Europe. It was more than 80ft long and 60ft wide, with walls 13ft thick,” said Roff Smith, author of an article on the Ness of Brodgar to be released in the August edition of National Geographic.

The archaeological excavation, which has so far only unearthed around 10 per cent of the original site, has yielded thousands of incredible artifacts including ceremonial mace heads, polished stone axes, flint knives, a human figurine, miniature thumb pots, beautifully crafted stone spatulas, highly-refined coloured pottery, and more than 650 pieces of Neolithic art, by far the largest collection ever found in Britain.

The monumental sites of the Ring of Brodgar, the Stones of Stenness, and the Maes Howe tomb, all located within several miles of the Ness, used to be seen as isolated monuments with separate histories, but as excavations at the Ness have progressed, archaeologists have come to believe that the megalithic sites in the surrounding region were all connected in some way with the Ness of Brodgar, although its purpose remains unknown.

“What the Ness is telling us is that this was a much more integrated landscape than anyone ever suspected,” said archaeologist Nick Card, excavation director with the Archaeology Institute at the University of the Highlands and Islands.

“All these monuments are inextricably linked in some grand theme we can only guess at. The people who built all this were a far more complex and capable society than has usually been portrayed.”

“Stand at the Ness today and several iconic Stone Age structures are within easy view, forming the core of a World Heritage site called the Heart of Neolithic Orkney,” said Smith.

“The Ness of Brodgar appears to be the anchor piece – the showpiece, if you will – that links these other great monuments into one great monumental landscape of a sort nobody had dreamed existed. And to have had it ­lying underfoot, unsuspected, for so many centuries only adds to the sense of wonder surrounding its discovery.