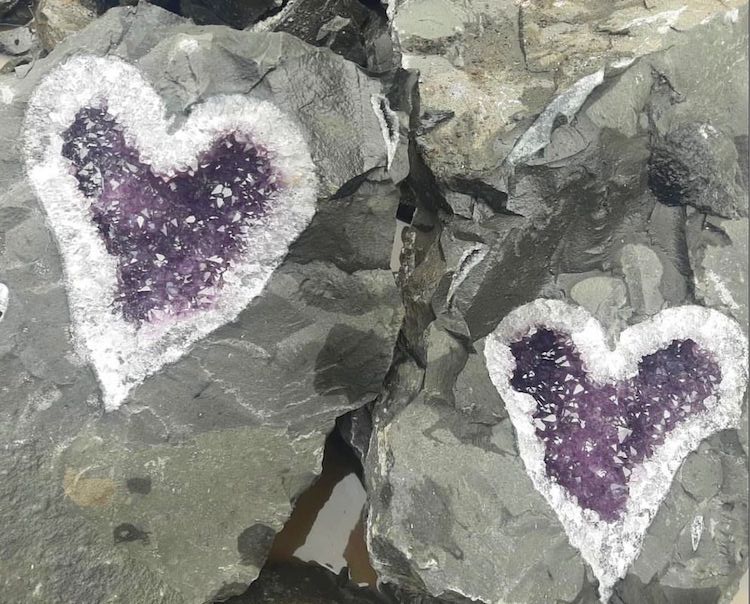 Once-In-A-Lifetime Find: Miners In Uruguay Get Surprised With A Beautiful Heart-Shaped Amethyst Geode

Beautiful gemstones that have been transformed to take on different shapes adorn several items of jewellery. However, the natural amethyst geode discovered by these miners did not need any processing. That’s because it already seems to be fine!

In its latest Santa Rosa mine near the Uruguay-Brazil border, Uruguay Minerals recently discovered a rare heart-shaped natural amethyst geode. Workers were able to separate a hard-to-break rock, and that’s when they found a pair of purple and white hearts embedded on either side of it.

“It was a normal day at our mine located in the Catalan area in Artigas. The workers were just now allowed in the area to find more geodes in the new mine,” Marcos Lorenzelli of Uruguay Minerals recalled of that fateful day.

“We were opening the mine to work normally but the land was difficult to work and our employees said, ‘We have to find something really nice due to the hard work we are doing.’” he told Modern Met.

The workers had no idea how true that statement would be, considering that they were struggling to get the excavation going because of the harder-than-usual basalt in the area.

But after two to three hours of non-stop toiling, the miners cracked open a rock using their excavator machine, and it revealed the most precious treasure inside.

Surely, this geode took many, many years to form, and it’s amazing to think how Mother Nature has managed to create such beauty. And these miners were the lucky ones to unearth it!

Geodes come in all shapes, colours, and sizes, but Uruguay Minerals has never found something quite like this before.

“This is very unique and it’s the first time we found something like this,” Lorenzelli said.

Extremely proud of its recent discovery, the company quickly shared photos of the heart-shaped geode on its website and social media pages.

The rare geode caught the internet by storm as photos of it went viral. On Reddit, a picture of two miners holding rocks bearing the heart geodes have earned 116K upvotes on the platform. Over 1.2K have engaged in the comments.

Here are some of the people’s reactions to this extraordinary natural amethyst geode.

“I wouldn’t mind betting that this started because someone carved a heart into a rock many decades ago.”

“Wow! That’s amazing!!! I love this! A few of my favourite things…. rocks, purple, hearts.”

“No way that’s amazing. I love Amethyst and that piece is definitely a gift from Mother Earth. Others took the discovery as a reminder to take care of our natural resources.

“Make a choice to love the earth back!”

Uruguay Minerals transforms its geodes into different shapes, including hearts, angels, wings, and Christmas trees. The brand sells its creations through its website, including this heart-shaped one, which they’ve named “The New Treasure.”

Unlike its other products, the brand left “The New Treasure” untouched because of how naturally beautiful it looks.