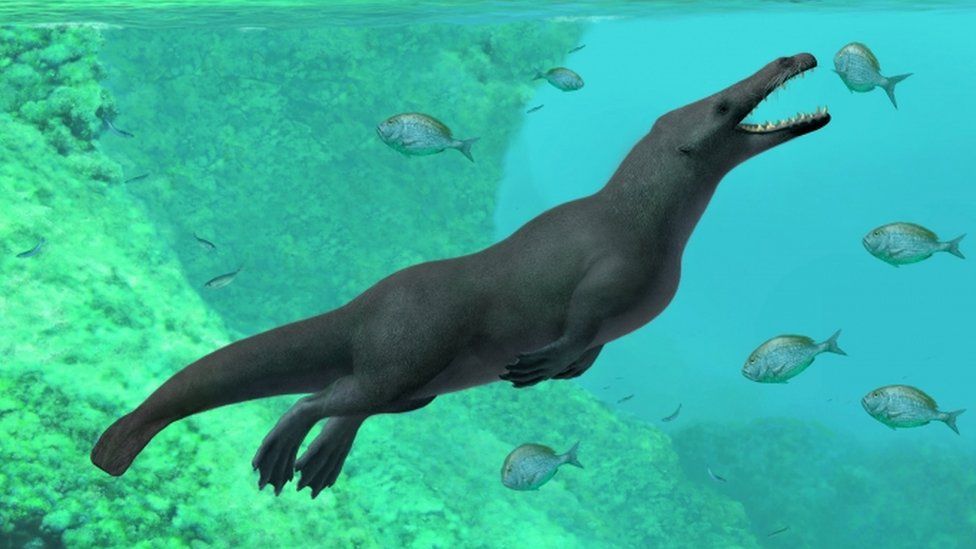 The four-legged creature above resembles an otter or a platypus at first glance. In fact, it’s a 42.6 million-year-old whale with a length of 13 feet. In a new study published in the journal Current Biology, palaeontologists have documented their discovery of this whale ancestor, whose skeleton was unearthed in Peru in 2011.

Named Peregocetus pacificus, which means “the travelling whale that reached the Pacific” in Latin, this recent finding is upending scientists’ understanding of how these creatures evolved and spread around the world millions of years ago.

“This is the first indisputable record of a quadrupedal whale skeleton for the whole Pacific Ocean,” study co-author Olivier Lambert said in a press release.

This ancient whale could walk and swim

Peregocetus had four legs, with small hooves of the tips of its fingers and toes. That adaption, along with the orientation of its hip and leg bones, suggests this whale ancestor could maneuver on land.

Its tail and webbed feet, however, indicate that Peregocetus could swim well, too, much in the same way modern-day otters do. So Lambert and his colleagues categorized the creature as amphibious (meaning it lived partially in water and partially on land).

But that doesn’t mean the animal was good at walking, and “certainly not at running,” according to the Los Angeles Times. It likely ate in the water and only took to solid ground for activities like breeding and giving birth, Lambert told the LA Times.

They excavated the whale’s tail vertebrae, jawbones, some of its spine, and it’s front and hind limbs. The animal’s skeleton suggests it was just over 13 feet long, and there’s evidence it had a pronounced snout filled with sharp teeth for chomping on fish.

Peregocetus’ tail bones appear similar to those of beavers and otters, suggesting that the limb played a large role in swimming, the authors wrote.

Unfortunately, the bones from the tip of Peregocetus’ tail were missing, so the researchers weren’t able to determine whether it had a well-developed tail fluke (like modern whales have) to help propel it through the water.

Scientists agree that today’s massive, flippered whales evolved from small, four-legged ancestors in south Asia more than 50 million years ago. Fossils from one of the oldest quadrupedal whales that lived 53 million years ago were discovered in India.

The ancient creatures likely migrated west from Asia to Africa and then swam across the Atlantic until they hit the shores of the Americas.

Until now, palaeontologists thought these ancient whales had only made it to North America and hadn’t strayed south.

This is the first time a whale ancestor with four legs has been found in South America. And according to the study authors, Peregocetus might also be the oldest quadrupedal whale found in the Americas.

Whale ancestors with four legs are ample in the North American fossil record. Researchers found a 41.2 million-year-old whale ancestor off the shores of South Carolina in 2014. This led scientists to hypothesize that amphibious whales likely reached North America after leaving Africa’s western shores.

But the discovery of Peregocetus – which is 1.4 million years older than the South Carolina fossil – in Peru suggests that the animal may actually have arrived in South America before spreading to North America.

So the study authors suggest that, contrary to previous ideas, Peregocetus and other whale ancestors likely travelled from Africa to South America. The distance between those was far smaller during the era in which Peregocetus lived – a period called the middle Eocene – than it is today. At the time, the distance between South America and Africa was about half of what it is today.

During the Eocene, North and South America were also separated by the ocean, which created a channel from the Atlantic to the Pacific Ocean. So the researchers now think that four-legged whales sliced through this gap between the Americas then travelled north.