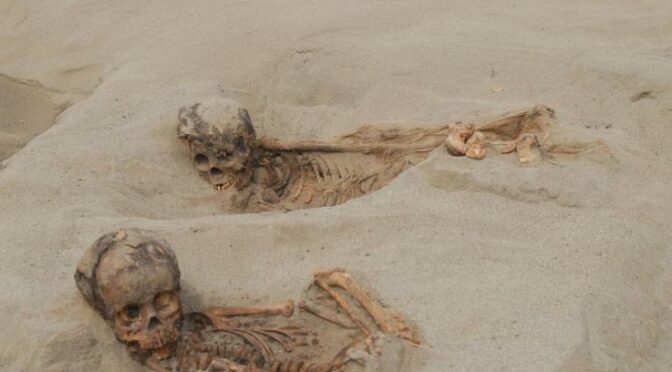 The largest child sacrifice on record took place after a torrential rainfall, when about 140 children and 200 young llamas likely had their hearts ripped out by the ancient Chimú culture in A.D. 1450, in what is now Peru.

The reason for the sacrifice, however, remains a mystery, according to a new study. Even so, the scientists of the study have several ideas. For instance, heavy rainfall and flooding from that year’s El Niño weather pattern may have prompted Chimú leaders to order the sacrifice, but without more evidence, we’ll likely never know the real reason, said study co-researcher John Verano, a professor in the Department of Anthropology at Tulane University in New Orleans.

Study lead researcher Gabriel Prieto, an assistant professor in archaeology at the National University of Trujillo, Peru, learned about the sacrificial site in 2011 after a father approached him while he was doing fieldwork on another project.

The father described a nearby dune with bones poking out of it. The father said, “Look, my kids are bringing bones back every day, and I’m tired of it,” said Verano, who later joined the project in 2014. Once at the dune, Prieto immediately realized that the site had archaeological significance, and he and his colleagues have been working on it since, excavating and studying the human and llama (Lama glama) remains at the site, known as Huanchaquito-Las Llamas.

“Who were the victims?

The site holds the remains of at least 137 boys and girls and 200 llamas. Many of the children and the llamas had cut marks on their sterna, or breastbones, as well as displaced ribs, suggesting that their chests had been cut open, perhaps to extract the heart, the researchers wrote in the study.

Many were buried in groups of three and placed from youngest to oldest. Some had red cinnabar paint (a natural form of mercury) on their faces, and others, especially the older children, wore cotton headdresses.

The llamas were either laid next to or on top of the children’s bodies. In many cases, llamas of different colours (brown and beige) were buried together, but facing different directions. Also buried at the site, near the children’s remains, were the bodies of two women and a man.

These adults do not have cut marks on their sterna, suggesting their hearts weren’t removed. Rather, one woman likely died from a blow to the back of the head and another suffered from blunt force trauma to her face. The man had rib fractures, but it wasn’t clear whether these injuries happened before or after death, possibly due to the weight of the rocks that were placed over his body, the researchers said.

The children weren’t buried with any discernible offerings, but the researchers did find a pair of ceramic jars and wooden paddles on the edge of the site, next to a single llama.

The Chimú culture dominated a large part of the Peruvian coast from the 11th to 15th century. It thrived, in part, because of its intensive agriculture; the Chimú watered their crops and livestock with a sophisticated web of hydraulic canals, the researchers wrote in the study.

This area is typically dry, drizzling only a few times a year. But it’s possible an extreme El Niño event, when warm water evaporates from the southern Pacific and falls as torrential rain on Peru’s coast, caused havoc in the society, not only flooding the Chimú’s lands but also driving away or killing marine life off the coast, Verano said.

Evidence shows that when the children and llamas were sacrificed, the area was sodden with water, even capturing human and animal footprints in the muck that still exist today. It’s unclear why this particular site, located almost 1,150 feet (350 meters) from the coast about 2 miles (3.2 kilometres) north of the city of Chan Chan, was chosen for the sacrifice, but researchers have some idea for why the children were chosen.

Children are often seen as innocent beings who aren’t yet full members of society, and thus might be viewed as appropriate gifts or messengers to the gods, Verano said. Moreover, these children were not all locals. Some of the children had experienced head shaping, and an analysis of carbon and nitrogen isotopes (an isotope is a variation of an element) in their remains showed that these kids came from different regions and ethnic groups within the Chimú state, the researchers found.

It’s unclear why their hearts were removed, but “worldwide, everyone is aware that the heart is a very dynamic organ,” Verano said. “You can feel and hear it beating. It’s very vital. If you take the heart out, a lot of blood comes out and the person dies.”Today, some people in the Peruvian highlands and Bolivia still remove the hearts from sacrificed llamas, Verano noted.

Sometimes the removed heart is burned and the animal’s blood gets splashed on places like mines, a measure thought to protect the workers within. However, it’s unknown how the Chimú viewed and treated hearts in antiquity, Verano said. The children’s remains are now safely stored by Peru’s Ministry of Culture, and the researchers have submitted permits so they can continue to study them, Verano said.

The discovery shows “the importance of preserving cultural patrimony and archaeological material,” Verano said. “If we had had not dug this, it would probably be destroyed now by a housing and urban expansion. So we’ve saved a little chapter of prehistory.”The study is “an incredible insight into the ritual and sacrificial practices of the Chimú kingdom,” said Ryan Williams, a curator, professor and head of anthropology at The Field Museum in Chicago, who has worked as a South American archaeologist for more than 25 years.

He added that while human sacrifice is reviled in our modern society, “we have to remember that the Chimú had a very different world view than Westerners today. They also had very different concepts about death and the role each person plays in the cosmos,” Williams, who was not involved with the study. Given that the sacrifice may have been in response to devastating floods, “perhaps the victims went willingly as messengers to their gods, or perhaps Chimú society believed this was the only way to save more people from destruction,” Williams said.