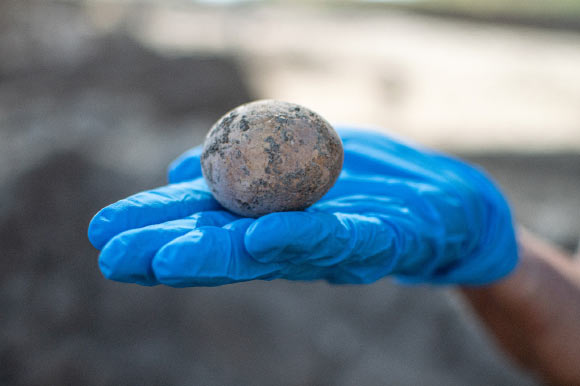 It’s been said that the elegant egg is the perfect food, and that just might be true as eggs have been a staple of human diets for millions of years before chickens were domesticated for both eggs and meat some 8,000 years ago.

In a remarkably rare discovery involving one of these ovoid essentials, scientists in Israel have cracked the archaeological case on a 1,000-year-old petrified egg that remained intact for centuries without breaking.

This is an extraordinary event in that only a handful of ancient chicken eggs have ever been located undamaged.

During a recent excavation at an ancient Islamic cesspit dating back roughly 1,000 years ago, Israel Antiquities Authority archaeologists in Yavne unearthed a single unbroken chicken’s egg.

This expansive dig site, directed by Dr. Elie Haddad, Liat Nadav-Ziv, and Dr Jon Seligman, had been the location of a diverse industrial settlement dating from the Byzantine period.

“Eggshell fragments are known from earlier periods, for example in the City of David and at Caesarea and Apollonia, but due to the eggs’ fragile shells, hardly any whole chicken eggs have been preserved.

Even at the global level, this is an extremely rare find,” says Dr. Lee Perry Gal of the Israel Antiquities Authority in an official press statement provided to SYFY WIRE. “In archaeological digs, we occasionally find ancient ostrich eggs, whose thicker shells preserve them intact.”

Domesticated poultry farming first emerged in Israel 2,300 years ago, during the Hellenistic and Early Roman periods.

“The egg’s unique preservation is evidently due to the conditions in which it lay for centuries, nestled in a cesspit containing soft human waste that preserved it.”

Unfortunately, even with careful handling, researchers found that the shell of the egg had been slightly cracked. Back in the Israel Antiquities Authority’s organics lab, conservationist Ilan Naor was able to restore the egg for further study.

“Families needed a ready protein substitute that does not require cooling and preservation, and they found it in eggs and chicken meat,” adds Dr. Gal in the statement.

“Unfortunately, the egg had a small crack in the bottom so most of the contents had leaked out of it. Only some of the yolk remained, which was preserved for future DNA analysis.”