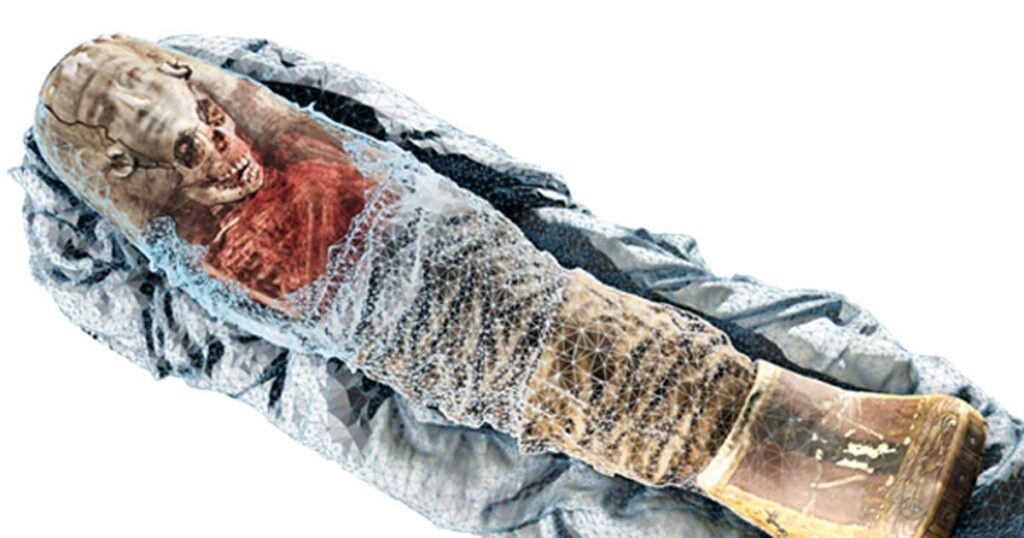 A stunningly accurate depiction of a mummy of a girl was created using CT and colourful 3D scans. When she died 2,000 years ago, she was just about five years old. Her body was wrapped in fine linen and adorned with a Roman-style necklace, amulet, and large round earrings before being laid to rest. All of those details are now visible in lifelike detail.

According to Live Science, the infant mummy is now known as “Sherit,” an ancient Egyptian term that means “little one.”

She lived in Egypt while the country was reigned over by the Romans and her burial style and the grave goods accompanying her body indicate she was part of a wealthy family. It is believed the girl died of dysentery or meningitis.

Julie Scott, executive director of the Rosicrucian Egyptian Museum in San Jose, California, where the child mummy is held, said why Sherit was chosen for the new project:

“For us, the value of this project is to bring this little girl’s story to life. She came to our museum in the 1930s, yet we knew very little about her. We wanted to find a way to learn more about who she was without damaging her mummy wrappings.”

The combination of 3D scans with CT scans provide a whole new level of dimension to examining the mummy. The colourful details of the surface of the mummy provided by a handheld 3D scanner add depth to the images of a CT scanner – which complements the first with its ability to see beneath the wrappings.

Volume Graphics said, “The result was, in this case, a mummy that is the most exact digital copy of the original to date, both within and without.”

Live Science reports that the scans have been combined into a single 3D model using software developed by Volume Graphics. That software has been added to iPads in the Rosicrucian Egyptian Museum. Scott explained what the museum plans to do with this tool in a statement :

“Guests will be able to move an iPad over the mummy case, in order to see the associated scans.

Our hope is that this new technology will help inspire guests to deeply relate to this little girl who lived so many years ago.”