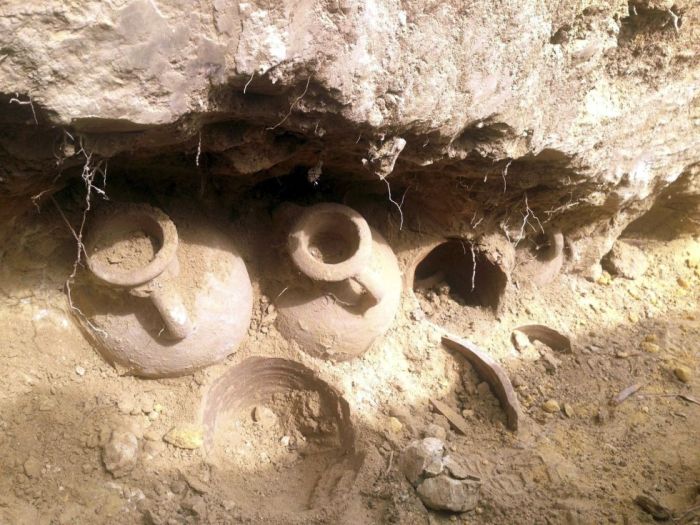 Construction Workers Stumble Across Old Pots With 1,300 Pounds Of Ancient Roman Coins Inside

Building companies discovered a hoard of bronze Roman coins concealed in jugs in Tomares, Spain during this week. 19 pottery jugs were discovered in the Zaudin Park when the workers dug ditches.

The urns were packed with coins showing an emperor on one side and various depictions of Roman stories on the back reported the Spanish newspaper, El Pais.

According to the Archeological Museum of Seville, where the treasure was carried, the coins weigh more than 1,300 pounds date back to the third or fourth centuries.

Ana Navarro Ortega, who heads the museum, said that 10 of the jugs broke during the dig.

“I can assure you that the jugs cannot be lifted by one person because of their weight and the quantity of the coins inside,” she said. “So now what we have to do is begin to understand the historical and archaeological context of this discovery.”

Why so many coins would be hidden in jugs raises interesting questions for archaeologists and historians.

Investigators floated the hypothesis that the money was set aside to pay imperial taxes or army levies, reported El Pais. The jugs appeared deliberately concealed underground, covered by a few bricks and ceramic fillers, according to the Andalusian department of culture.

Richard Weigel, a professor of ancient Greece and Rome at Western Kentucky University, told the PBS NewsHour that the coins likely were buried during an era of “great discord in the Roman empire.”

The central authority in Rome broke down in the middle of the third century, he said. Germanic tribes invaded the country from time to time, in addition to other challenges to the various emperors.

The part of southern Spain where the coins were discovered would have been considered a distant land to emperors before it became a normal part of the Roman Empire, said, Weigel.

“The suggestion that they were collected to pay taxes to the Roman Empire is, of course, possible,” he said. “But I suspect that they could have been stored to pay one of the Roman legions in the area and to hide the money from invaders in the region.”

Once the emperors on the coins are identified, he continued, it should be easier to date the coins and put them in the context of military activities and invasions.