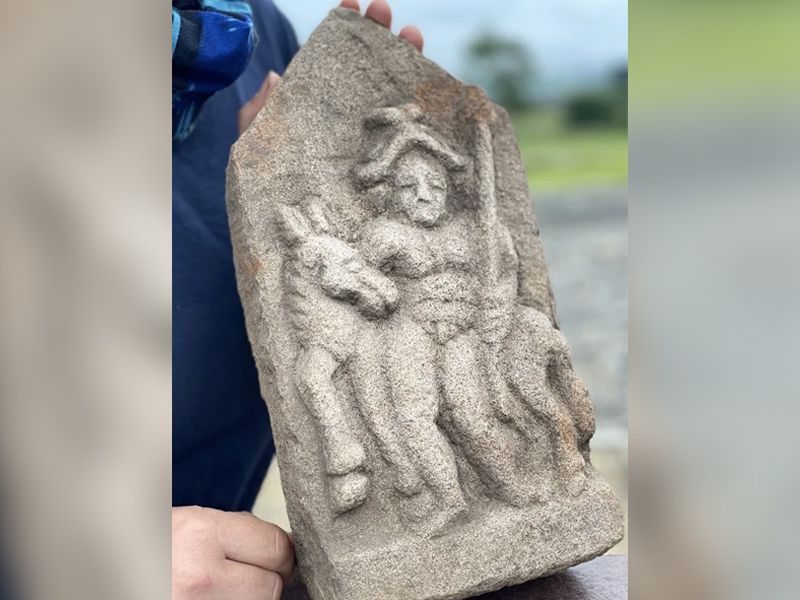 An ancient carving depicting a naked “mystery horseman” discovered at Vindolanda, a Roman fort near Hadrian’s Wall, might be a depiction of a god, archaeologists said.

The carving shows a man without clothes (except a hat) who is holding a spear and standing in front of either a horse or donkey. This roughly 6-inch-wide by 12-inch-long (16 by 31.5 centimetres) stone would have fit into a recess at the fort,  according to archaeologists at Vindolanda Charitable Trust in the United Kingdom.

“The nakedness of the man means he is probably a god, rather than a mere cavalryman,” Marta Alberti, one of the archaeologists overseeing the excavations at Vindolanda, said in a statement released June 28. “He is also carrying a spear in his left arm, a common attribute of the god of war — Mars.

However when you look at his head, the two almost circular features could be identified as wings: a common attribute of Mercury — god of travel. Horses and donkeys are also often associated with Mercury as a protector of travellers.”

Two volunteer excavators from Newcastle found the carved sandstone relief at the fort in Northumberland, a historic county in northeast England, on May 20.

The volunteers, Richie Milor and David Goldwater have taken part in annual excavations at Vindolanda for the last 15 years. This year, they were asked to unearth a flagged floor — a floor covered with stone flagstones, or pavers — within a fourth-century building at the fort. They found the unique carving a few inches below the topsoil, laying amongst the larger flagstones, they said.

“I saw one of the legs of the horse first and then the pointed top of the relief,” Goldwater said in the statement. Milor added, “We are just absolutely elated, very proud to be part of this discovery, it was actually very emotional.

Whether you find something or not, we love coming to this site, playing our small part in the research that takes place, but finding this made it a very special day indeed.”

The finding is the first stone relief of its kind found at Vindolanda. In archaic and classical Greek sculpture, which the Romans drew on, “nudity characterizes figures who otherwise embody more-than-mortal size, might, and blessed arete [excellence],” and it often signifies heroism, according to a 2007 study in the American Journal of Archaeology.

While the carving doesn’t have an inscription, its location of discovery is an important clue; the floor was close to a fourth-century cavalry barrack. Perhaps the forces living in the barrack had their own ways of interpreting Mars, Mercury or a supernatural variation who possessed qualities of both gods, the archaeologists said.